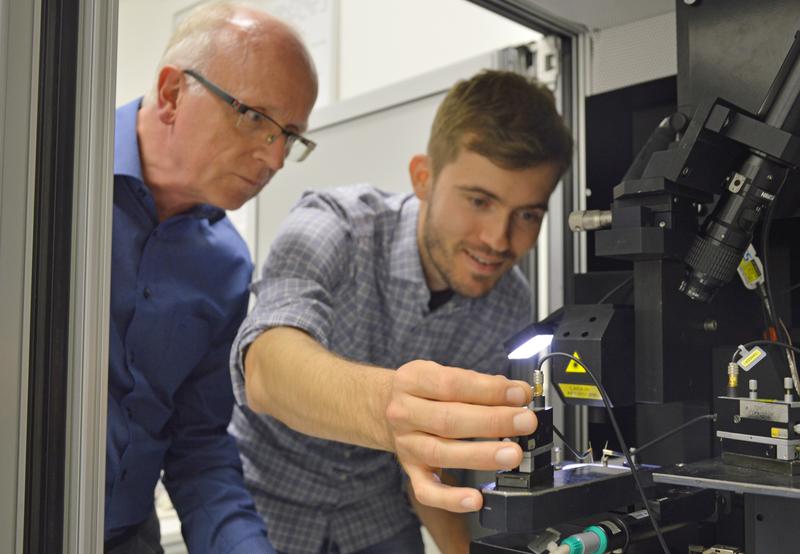 The crystal structure of ferroelectric materials can be changed by electrical signals. After immersion in an acid, the difference becomes visible under a scanning electron microscope. | Quelle: Image: Simon Fichtner | Download
❮ ❯

BMBF funds CAU and the Fraunhofer Institutes in Itzehoe and Freiburg with €2.3 million for a joint research project on microelectronics and microsystem technology.

For a long time, scientists have been investigating so-called ferroelectric materials, which can change their electric polarisation, to enable the development of new data storage options or micro actuators for speakers, for example. However, so far they have been not powerful enough or too unreliable for industrial applications. A promising ferroelectric material, discovered by materials scientist Simon Fichtner of Kiel University (CAU), could open up completely new potential applications. In a joint project with the Fraunhofer Institute for Silicon Technology in Itzehoe (ISIT) and the Fraunhofer Institute for Applied Solid State Physics in Freiburg (IAF), he wants to gain a better understanding of the behaviour of the material, and make it usable in industrial applications. It could enable completely new concepts in microelectronics and microsystem technology, and thus significantly improve the performance of information storage and micro actuators. Launched in October, the project will be funded by the Federal Ministry of Education and Research (BMBF) for four years, with a total of 2.3 million euros.

They are amongst the most researched materials in microelectronics and microsystem technology and can be found for example in inkjet printers or transistors: so-called ferroelectrics are permanently electrically polarised, even without an external electric field. If an external electrical signal is introduced, the crystal structure of the material changes at the atomic level - and thus its electric polarisation. This enables a wide range of technical applications.

As part of his doctoral research, Simon Fichtner investigated aluminium scandium nitride (AIScN), which he produced himself in the cleanroom of the Kiel Nanolaboratory at the CAU. While doing so, he made an unexpected observation: with the introduction of large electric fields, the crystal structure of the material could be rotated by 180 degrees. He had found a first indication of ferroelectricity, which he was able to confirm by further experiments. This property of AIScN was previously unknown to science.

"We actually wanted to make the material for high-performance microelectronic actuators for speakers, for example. That is why we tested how much voltage it can carry," explained the materials scientist. "We expected that it would eventually break. Instead, at a certain point, it changed its electric polarisation to negative," added his doctoral supervisor Bernhard Wagner, professor of materials and processes of nanosystem technology at the CAU, and also deputy head of the ISIT.

The two scientists are convinced that this special feature increases the technological potential of the AIScN material enormously. In comparison with other ferroelectric materials, AlScN is characterised by significantly improved stability and performance. At the same time, it is technically highly compatible with core technologies in the semiconductor industry. Technical components produced with AIScN could, for example, improve the sound, energy consumption and durability of headphones, or increase the reaction speed and longevity of information storage.

The scientists published their surprising discovery this year in the scientific journal "Journal of Applied Physics". Their publication was highlighted as a Featured Article and was extremely well-received by experts. In a joint BMBF project with the Fraunhofer Institutes ISIT and IAF, they are now going a step further: they want to take a closer look at the unusual behaviour of the material, and find out which new technical applications it enables.

On this basis, the ISIT is exploring the possibilities of using AIScN for actuators, while the IAF wants to use it to produce better power transistors. In close cooperation with both Fraunhofer Institutes, the CAU research group is specifically developing the material further for various technical applications. There are also potential uses in optoelectronics and medical technology. Wagner and Fichtner are also cooperating on this with other working groups at the CAU, from the fields of nanoelectronics (Professor Hermann Kohlstedt) and transmission electron microscopy (Professor Lorenz Kienle).

"We have been able to produce the first ferroelectric here, which is based on a so-called III-V semiconductor. With this material, ground-breaking new areas become technically possible, which were previously not achievable with the established ferroelectrics - this could be a real innovation boost in microelectronics and microsystem technology," said Wagner regarding the potential of the discovery. This was possible mainly due to the excellent infrastructure at Kiel University. Using a highly-specialised sputtering system in the Competence Center Nanosystem Technology at the CAU, the composition of materials can be changed in a targeted manner. "In this way, we were able to produce materials with a particularly high scandium content of over 40 percent," explained Fichtner. The special organisation of the cleanroom at the Competence Center offered the required flexibility to test completely new materials for microsystems technology.

With its "Research for new Microelectronics" (ForMikro) funding line, the BMBF supports a particularly research-intensive field, whose applications are drivers of progress, competition and innovation across all sectors. The funding is intended to bridge the gap between pure fundamental research and industry-led research, for the next generation of microelectronics.

https://www.uni-kiel.de/de/pressemitteilungen/2019/315-ferroelektrik-3.jpg
Caption: With a special unit in the cleanroom at the CAU, Simon Fichtner can change the composition of materials in a targeted manner.
© Julia Siekmann, CAU

https://www.uni-kiel.de/de/pressemitteilungen/2019/315-ferroelektrik-4.jpg
Caption: The crystal structure of ferroelectric materials can be changed by electrical signals. After immersion in an acid, the difference becomes visible under a scanning electron microscope. Areas with a positive polarisation (right) were almost completely removed by the acid, while areas with a negative polarisation (left) are extremely stable.
© Simon Fichtner

More information:
Details, which are only a millionth of a millimetre in size: this is what the priority research area "Kiel Nano, Surface and Interface Science – KiNSIS" at Kiel University has been working on. In the nano-cosmos, different laws prevail than in the macroscopic world - those of quantum physics. Through intensive, interdisciplinary cooperation between physics, chemistry, engineering and life sciences, the priority research area aims to understand the systems in this dimension and to implement the findings in an application-oriented manner. Molecular machines, innovative sensors, bionic materials, quantum computers, advanced therapies and much more could be the result. More information at www.kinsis.uni-kiel.de