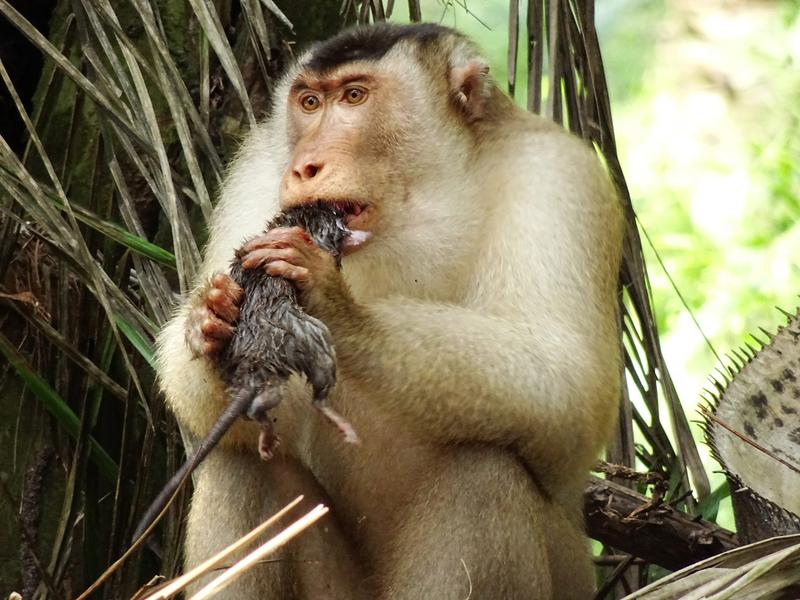 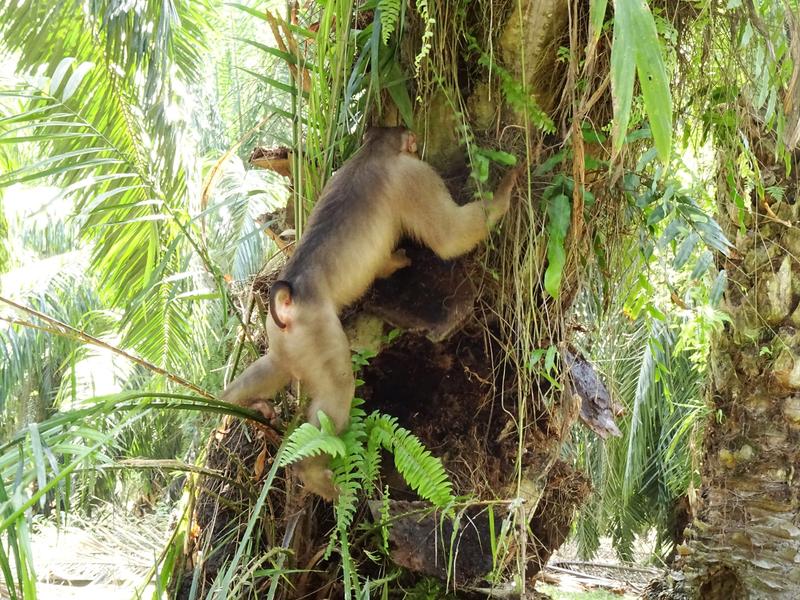 In Malaysia, wild pig-tailed macaques do not have the best reputation and are even considered a crop pest. Contrary to this, they actually feed on rats, the major oil palm pest, and can provide an important ecosystem service as biological pest control agent. This was found by a team of researchers from Universiti Sains Malaysia (USM), the German Centre for Integrative Biodiversity Research (iDiv), Leipzig University (UL) and the Max Planck Institute for Evolutionary Anthropology (MPI EVA). Their research investigates the costs and benefits of macaques foraging in oil palm plantations and was published in Current Biology.

Used as common ingredient of processed foods, cosmetics, detergents and biofuel, palm oil has become an indispensable part of our modern society. The production comes at a high cost for the environment: Decline in pristine forest cover, reduced biodiversity and impaired climate regulation functions are only some of the negative effects when tropical rainforest is turned into monocultures. To date, more than 18 million hectares of land worldwide are covered with oil palm plantations, one third of which are located in Malaysia, one of the world’s main palm oil producers.

Oil palm plantations commonly suffer high yield losses due to rats feeding on the ripe and unripe fruits. In Malaysia alone, the annual losses equal an area twice the size of Luxembourg. Consequently, rodent pests are often managed with poison. The extensive use of rodenticides is not only expensive and largely ineffective, but, most importantly, also very harmful to non-target animals and the environment. One crucial aspect of biological pest control and, thus, more sustainably managed oil palm plantations, is the identification of natural rat predators such as barn owls that have become a widely used biological alternative for conventional pest management methods. However, researchers doubt that barn owls alone can regulate rodent populations effectively. “The best way seems a combination of different predator species that cover different ecological niches, foraging either during the day or night, or in different substrates in the plantation,” says corresponding author Dr Nadine Ruppert from USM, founder of the Macaca Nemestrina Project.

In their study, the team from Malaysia and Germany assessed whether pig-tailed macaques can, indeed, significantly reduce populations of plantation rats. They investigated the foraging behaviour of two groups of wild and habituated Southern pig-tailed macaques (Macaca nemestrina) in oil palm plantations next to a forest reserve at the west coast of Peninsular Malaysia. The data revealed that even though macaques also feed on palm oil fruits, they cause relatively minor direct yield losses: less than 1% compared to 10% caused by rats. More importantly, the authors estimated an annual consumption of more than 3,000 rats per macaque group in this area. “We assume that macaques are excellent pest control agents as they actively search for rats by applying a very targeted foraging technique,“ says first author Anna Holzner, doctoral researcher at UL and MPI EVA. “Unlike other predators, which hunt for rats on the plantation ground during the night, pig-tailed macaques actively remove pieces of old, persistent leaf bases from oil palm trunks to uncover rats that seek shelter during the day.” Holzner and her colleagues were also able to show that regular plantation visits by the macaques can reduce rat numbers by more than 75%. When offsetting costs and benefits, macaques can contribute to yield increases of up to 7%, which is equal to an annual monetary gain of approximately 100€ per hectare.

“We expect that our results will encourage both private and public plantation owners to consider the protection of these primates and their natural forest habitat in and around oil palm plantations,” comments senior author Prof Anja Widdig, head of the research group Primate Behavioural Ecology at MPI EVA and UL. In collaboration with local palm oil companies and NGOs, they will work towards the realisation of a plantation design that maintains viable macaque populations and higher levels of biodiversity via wildlife corridors, while increasing the plantations’ productivity and sustainability by effective and environmentally friendly pest control. “This can ultimately lead to a win-win situation for both the oil palm industry and biodiversity,” says Prof Widdig.