Time travel through the evolution of terrestrial plants 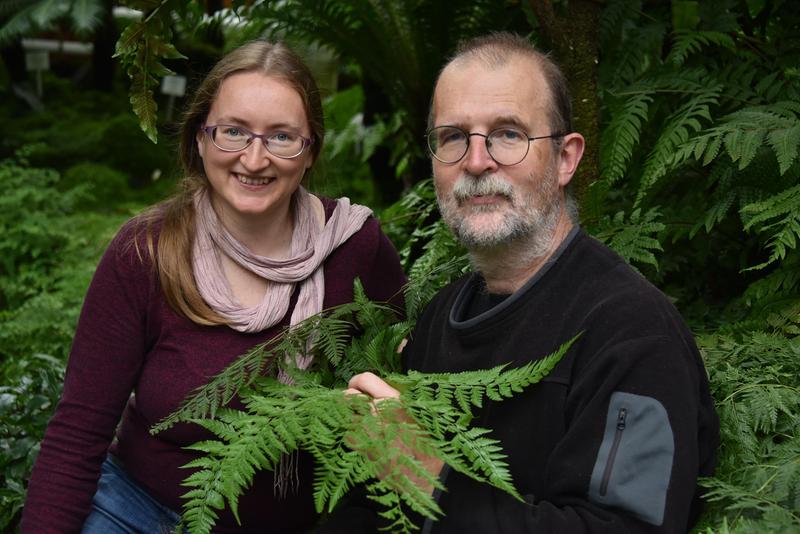 An international research consortium to which scientists from Jena contributed has presented data on the evolution of plants. Its publication in the scientific journal ‘Nature’ shows how all groups of plants, their genes and genomes have evolved over more than one billion years.

Today, the results of a mammoth project have been published by more than 200 scientists from more than 130 research institutes all over the world. Over nine years, the scientists have used extensive computer technology to analyse all the active genes of more than 1,000 species of green algae, mosses, club mosses, ferns, gymnosperms, and flowering plants; organise genes and gene families into family trees; and unravel the relationships between plants. With the data presented, we are able to understand in unprecedented detail how and when plants became capable of defying gravity to grow to great heights or of producing seeds, flowers and fruits. The study has been published in the renowned journal ‘Nature’ and among the authors is a team from Friedrich Schiller University, Jena.

In the study, Prof. Günter Theißen and Dr Lydia Gramzow of the Matthias Schleiden Institute of Genetics, Bioinformatics and Molecular Botany of the University of Jena investigated when specific genes responsible for flower development arose and were amplified in the course of evolution. These MADS-box genes, as they are known, occur in all plant families, though the frequency of their occurrence varies from one plant family to another. “The earliest ancestor of today’s plants were aquatic green algae,” explains geneticist Prof. Theißen. “These had neither flowers nor seeds and also very few MADS-box genes,” he adds. Over time, these ancient ancestors evolved into the terrestrial plants of today, including mosses, ferns and seed plants. With the increasing diversity of plant species, the number and diversity of the MADS-box genes also grew. Because MADS-box genes regulate important development processes of plants, there is a direct connection between the number and diversity of these genes and the complexity and diversity of plant structures.

It has long been known that the genomes of current plants have different numbers of MADS-box genes. While simple mosses or club mosses have fewer than 20 copies on average, between 50 and 300 different MADS-box genes can be found in the genomes of more highly evolved seed plants. “One might be tempted to conclude from this that the proliferation of genes is simply a consequence of the increasing complexity of plants,” says Dr Lydia Gramzow. In the current study, Gramzow examined nearly 30,000 sequences and was able to disprove this assumption. “We found that the number of MADS-box genes is the result of independent gene amplifications,” says Gramzow. As is shown in the family tree constructed by the researchers in Jena, which is presented in the ‘Nature’ article, the MADS-box genes in ferns and seed plants, for example, have been amplified and have evolved further separately. “Both groups of plants can be traced back to a common ancestor,” explains Prof. Theißen. From this ancestor, the ferns of today have evolved in one line and the seed plants in another. “In both lines the MADS-box genes amplified independently and with differing frequency. We suspect that there were four different ancestral genes, which were present in the most recent common ancestor of today’s ferns and seed plants some 380 million years ago.”

The geneticists conclude from their results that similar processes could also have happened in other gene families. “From this, we firstly learn that evolution does not necessarily follow a one-dimensionally linear path, but that the same levels of complexity are sometimes reached via different paths,” concludes Prof. Theißen. Secondly, the study also shows that evolution does not inevitably produce more complex life forms. “Sometimes, reduction is clearly an evolutionary advantage – a phenomenon that is already known from many parasites, for example,” says Theißen. The genetic data that has now been published corroborated that all mosses currently in existence, for instance, are derived from a common ancestor. The liverworts, which appear quite primordial in comparison with the mosses, therefore possibly owe their appearance to a later simplification of their form.