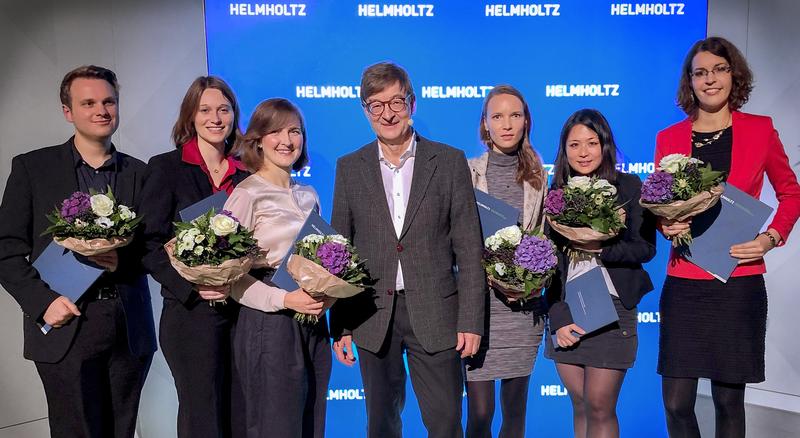 The winners of this year’s Helmholtz Doctoral Prize were announced on November 6th at the Helmholtz Horizons Symposium. The prizes were presented by the Helmholtz President during a ceremony at Futurium in Berlin. For the first time, five of the six young researchers are women.

“Helmholtz is currently supervising more than 8,000 doctoral candidates, who make a major contribution to the successful research conducted by our scientific organization,” said Otmar D. Wiestler, President of Helmholtz. “I'm very happy that, today, we have the opportunity to recognize six of them for their outstanding achievements.” Wiestler noted that the prize is a key incentive for the young researchers to embark on a career in science.

Five of the six prizes were awarded to women this year. “This is a truly special aspect of this year’s awards,” said Wiestler at the ceremony at Futurium, during the Helmholtz Horizons Symposium in Berlin. “Providing talented young women with the best support for their scientific careers is an important priority for us. We had an especially high number of superb female applicants in this round of awards.”

Young scientists who have completed their doctoral studies at one of the Helmholtz Centers and received their doctorate with excellent results within the last year are eligible to be nominated by their Centers for the Helmholtz Doctoral Prize. The award supplements the successful tools that are already established at Helmholtz for promoting young researchers. It recognizes outstanding achievements during the doctoral phase, enhances the value of a doctorate, and promotes scientific excellence.

One prize is awarded in each of the six Helmholtz Research Fields every year. Successful candidates receive a one-time financial award in the amount of 5,000 euros, which they can utilize for scientific purposes as they see fit. In addition, a lump-sum allowance for travel and materials of up to 2,000 euros per month is made available to the recipients of the prize to visit an international research institution abroad for up to six months.

A video on this year’s prize winners can be found at the following link: helmholtz.de/doktorandenpreis2019