Distant worlds under many suns 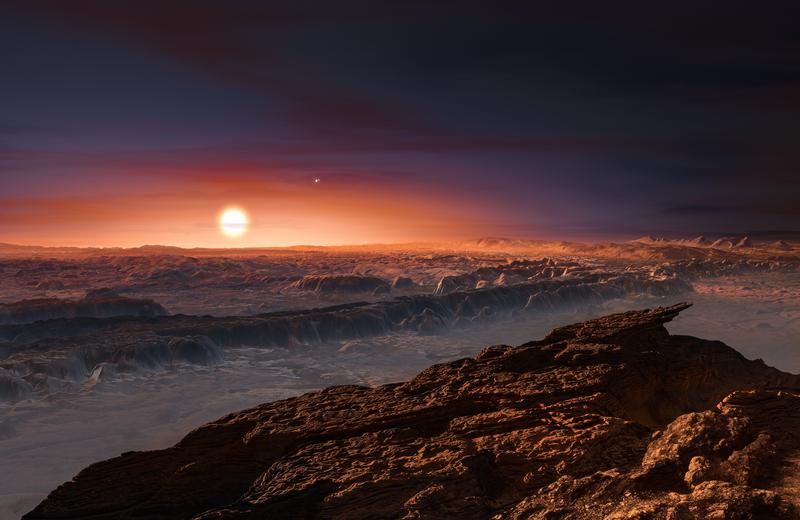 The nearest exoplanet Proxima Centauri b is situated in a multiple star system. This is what the system might look like when seen from the planet’s surface. | Quelle: Photo: ESO/M. Kornmesser (artist's impression) | Download

Astrophysicist Dr Markus Mugrauer of Friedrich Schiller University Jena, Germany, has discovered and characterised many new multiple star systems that contain exoplanets. For this, he searched more than 1,300 exoplanet host stars to see whether they have companion stars, using the observation data of the Gaia space telescope. He found that a total of 15 per cent of those stars have at least one companion star, which is only about half the frequency expected for solar like stars. This could indicate that the influence of several stars in a system disrupts the process of planet formation as well as the further development of their orbits.

Is Earth the only habitable planet in the universe or are there more worlds somewhere out there that are capable of supporting life? And if there are, what might they look like? In a bid to answer these fundamental questions, scientists are searching space for exoplanets: distant worlds that orbit other stars outside our solar system.

More than 4,000 exoplanets are known to date, most of them orbiting single stars like our Sun. Now astrophysicist Dr Markus Mugrauer of Friedrich Schiller University Jena, Germany, has discovered and characterised many new multiple star systems that contain exoplanets. The findings confirm assumptions that the existence of several stars influences the process by which planets are formed and develop. The study by Mugrauer, of the Astrophysical Institute and University Observatory of the University of Jena, has now been published in the renowned specialist journal ‘Monthly Notices of the Royal Astronomical Society’.

“Multiple star systems are very common in our Milky Way,” explains Mugrauer. “If such systems include planets, they are of particular interest to Astrophysics, because the planetary systems in them can differ from our solar system in fundamental ways.” To find out more about these differences, Mugrauer searched more than 1,300 exoplanet host stars with exoplanets orbiting them to see whether they have companion stars. To this end, he accessed the precise observation data of the Gaia space telescope, which is operated by the European Space Agency (ESA). In this way, he succeeded in demonstrating the existence of around 200 companion stars to planetary host stars that are up to 1,600 light years away from the Sun. With the help of the data, Mugrauer was also able to characterise the companion stars and their systems in more detail. He found that there are both tight systems with distances of only 20 astronomical units (au) – which in our solar system corresponds approximately to the distance between the Sun and Uranus – as well as systems with stars that are over 9,000 au from each other.

The companion stars also vary as to their mass, temperature and stage of evolution. The heaviest among them weigh 1.4 times more than our Sun, while the lightest have only 8 per cent of the Sun’s mass. Most of the companion stars are low-mass, cool dwarf stars that glow faintly red. However, eight white dwarfs were also identified among the faint stellar companions. A white dwarf is the burnt-out core of a sun-like star, which is only about as big as our Earth, but half as heavy as our Sun. These observations show that exoplanets can indeed survive the final evolutionary stage of a nearby sun-like star.

The majority of the star systems with exoplanets identified in the study have two stars. However, some two dozen hierarchical triple star systems and even a quadruple star system were detected. In the range of distances investigated, of between approximately 20 and 10,000 astronomical units, a total of 15 per cent of the stars studied have at least one companion star. This is only about half the frequency expected in general for solar-like stars. In addition, the companion stars detected show distances about five times greater than in ordinary systems. “These two factors taken together could indicate that the influence of several stars in a star system disrupts the process of planet formation as well as the further development of their orbits,” says Mugrauer. The cause of this could be first the gravitational impact of a stellar companion on the gas and dust disc in which planets form around their host star. Later, the gravitation of the stellar companion influences the motion of the planets around their host star.

Markus Mugrauer would like to pursue the project further. In the future, too, the multiplicity of newly discovered planetary host stars would be studied using data from the Gaia mission and any companion stars detected would be precisely characterised. “In addition, we will combine the results with those of an international observational campaign, which we are currently conducting on the same topic at the Paranal Observatory of the European Southern Observatory in Chile,” added Mugrauer. “We will then be able to investigate the precise influence of stellar multiplicity on the formation and development of planets.”