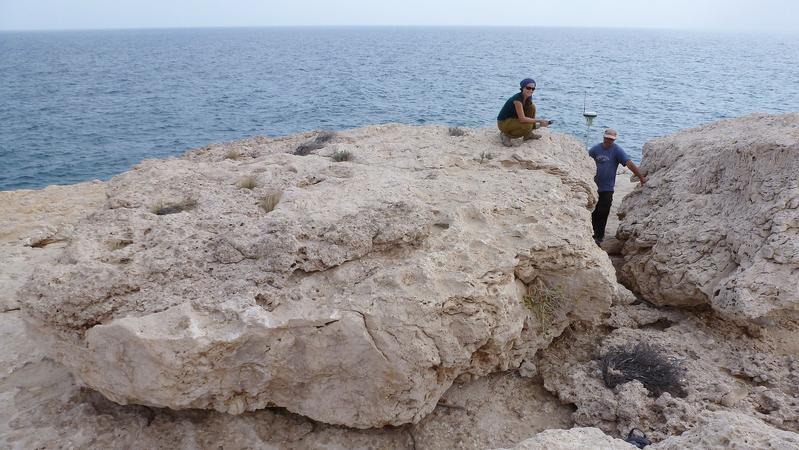 The largest of these rocks weighs about 100 metric tons, which is more than a Leopard tank. On the rock: Magdalena Rupprechter, GUtech, Oman; to the right: Gösta Hoffmann, University of Bonn. | Quelle: © Photo: Anne Zacke | Download 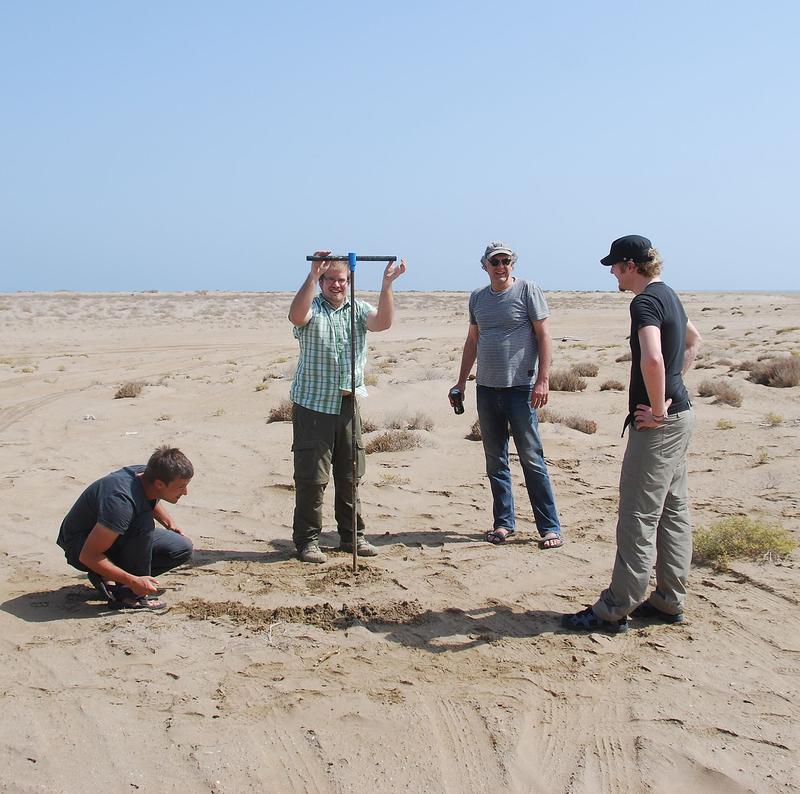 15-meter high waves that pushed boulders the weight of a Leopard tank inland: This is more or less how one can imagine the tsunami that hit the coast of today's Sultanate of Oman about 1,000 years ago, as concluded by a recent study by the universities of Bonn, Jena, Freiburg and RWTH Aachen. The findings also show how urgently the region needs a well-functioning early warning system. But even then, coastal residents would have a maximum of 30 minutes to get to safety in a similar catastrophe. The study will be published in the journal "Marine Geology", but is already available online.

Oman lies in the east of the Arabian Peninsula. The coasts of the Sultanate are repeatedly struck by tsunamis, most recently in 2013. Even with the most severe of these in recent times, the Makran event in 1945, the damage remained comparatively low. Back then, the tidal wave reached a height of three meters.

The scientists have now discovered evidence of a tsunami which is likely to have been much more powerful, with waves of up to 15 meters. For this purpose, the researchers from Bonn, Jena and Aachen concentrated their terrain investigations on a 200-kilometer coastal strip in northeastern Oman. "There we identified 41 large boulders, which were apparently carried inland by the force of the water," explains Dr. Gösta Hoffmann from the Institute for Geosciences at the University of Bonn.

Quartz clock in the rock

Some of the boulders were probably formed when the tsunami shattered parts of the cliffs; for one of them, the largest weighing around 100 metric tons, scientists were even able to determine the exact point at which it broke off. Others show traces of marine organisms such as mussels or oysters that cannot survive on land. "Certain methods can be used to determine their time of death," says the geologist Gösta Hoffmann. "This allowed us to establish when the boulders were washed ashore."

The quartz crystals in the rock also represent a kind of clock: They provide information about the last time they were exposed to the sun. This allowed the scientists to deduce how long the rocks had been in the place where they were found. The scientists from Freiburg are specialists in this method. "Many of these measurements gave us a value of about 1,000 years," emphasizes Hoffmann. "This corresponds well with the dating results of clay fragments we found in tsunami sediments. They originate from vessels used by coastal dwellers."

The Arabian and Eurasian tectonic plates collide in the Arabian Sea. They move towards each other at a speed of about four centimeters per year. During this process, one plate slides beneath the other. Sometimes they get stuck in this subduction zone. This can cause tensions that intensify more and more over years and decades. If they suddenly come loose with a violent jolt, the water column above the plates starts to move. This can lead to the extremely destructive waves that are characteristic of tsunamis.

"So far it has been unclear to what extent the Arabian and Eurasian plates get stuck," says Hoffmann. At the Makran event of 1945, for example, the effects were locally confined. The current findings, however, suggest that the tensions can also build up and unload on a very large scale - there is no other feasible explanation for the enormous forces at work at the time. "It is therefore extremely important that a tsunami early warning system is put in place for this region," stresses the geologist.

Nevertheless, even a smaller tsunami would have devastating consequences today: A large part of the vital infrastructure in the Sultanate of Oman has been built near the coast, such as the oil refineries and seawater desalination plants. A well-functioning warning system can, however, at least give residents some time to get to safety. Not very much though: Tsunamis move at the speed of a passenger aircraft; in the best case, the time between the alarm and the wave's impact would therefore be little more than 30 minutes.