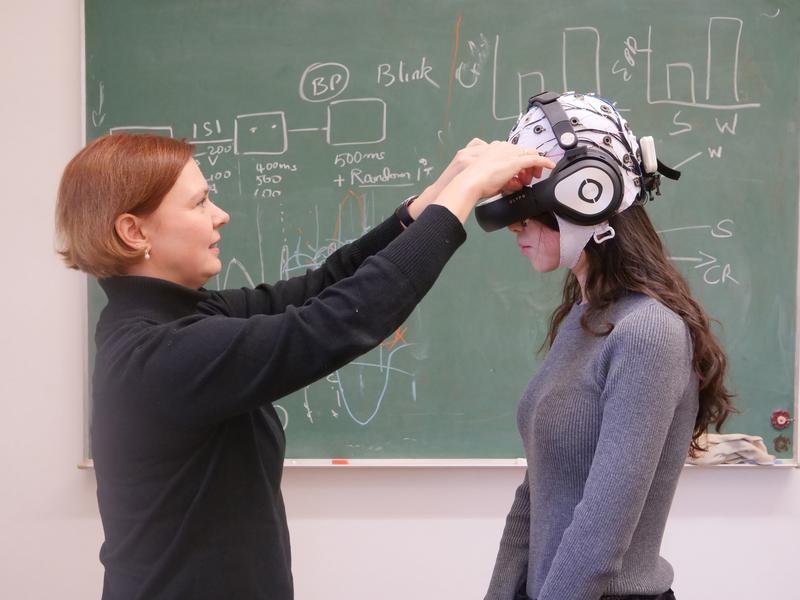 When people walk around, they process visual information differently than at rest: the peripheral visual field shows enhanced processing. This is what neuroscientists in Würzburg have discovered.

How do we perceive our environment? What is the influence of sensory stimuli on the peripheral nervous system and what on the brain? Science has an interest in this question for many reasons. In the long term, insights from this research could contribute to a better understanding of diseases such as ADHD and Parkinson‘s disease.

Perception and the underlying neuronal activities are usually measured while subjects are sitting or lying, for example while doing magnetic resonance imaging. As a rule, the head is fixed and people are encouraged not to blink. The measurements therefore take place under well-controlled but rather unnatural conditions.

When processing visual stimuli, however, it makes a difference whether the person is sitting or moving: When walking around, the peripheral part of the visual field shows enhanced processing compared to the central part. This can be proven both by the behaviorally measured perception of the test persons and by their brain response.

This shift in visual preference makes sense. "It is above all the peripheral visual input that provides information about the direction and speed of our movement and thus plays an important role for navigation," says Dr. Barbara Händel. The neuroscientist from Julius-Maximilians-Universität (JMU) Würzburg in Bavaria, Germany, and her colleague Dr. Liyu Cao have published their findings in PLOS Biology.

"It was known from animals that increased body movements lead to an increased firing rate in visual areas of the brain," says Dr. Händel. So far, there are only a few behavioural experiments available for humans that investigate the influence of movement on sensory brain areas. However, there is evidence that cognitive processes are linked to the behavioural state. "For example, some studies show that people learn better when they move," says the JMU researcher. However, the underlying neuronal mechanisms have not yet been tested in detail.

It is precisely such gaps in knowledge that Barbara Händel wants to close with her work. In order to explore the link between movement and perception, sophisticated technical equipment is necessary. While the test subjects walk around, they wear electrode caps and a small amplifier that records their brain waves. The EEG data are sent wirelessly to a laptop, which the subjects carry in a backpack. Motion sensors, video glasses, and a mobile device for recording eye movements complete the setting.

Quite an effort. "But we have to take this step if we want to understand human perceptual strategies during natural behavior," says Dr. Händel. Research into perception during movement is still in its infancy. It is now up to science to ask clever questions and find out which of them can be answered with mobile technical equipment.
Many exciting research questions

Next, the JMU scientist wants to further investigate the effect of altered perception during movement. Does it only occur for visual input or possibly also in other sensory areas? Does it, in addition to navigation, perhaps also play a role in other cognitive processes such as memory and creativity?

All this is possible: experiments with rats have shown that these animals learn better, when they are in motion. And the idea that walking increases creativity has existed since ancient times. "For example, the Peripatetics, a philosophical school around Aristotle, usually were discussing while walking, from which their name derives," says Barbara Händel.

There is also a connection between creativity and eye movements: "It is known that people blink more often the more creatively they solve a task. And we found that people also blink more often when they walk around compared to being at rest." Obviously, there are many connections between the movements of the body, the eyes and the mental performance. Their research could reveal many more interesting aspects.

Sponsor of the project

The work of Barbara Händel is funded by a Starting Grant of the European Research Council (ERC). The ERC awards this grant of 1.5 million euros to excellent young scientists.

The JMU neuroscientist conducts her research at the Chair of Cognitive Psychology, headed by Professor Wilfried Kunde. Among other things, his team investigates perceptual processes in relation to singular human movements. The JMU Sports Centre provided one of the sports halls for the experiments with a total of 30 test subjects. "The unbureaucratic support and problem-free cooperation was a real highlight of this project," says the researcher.