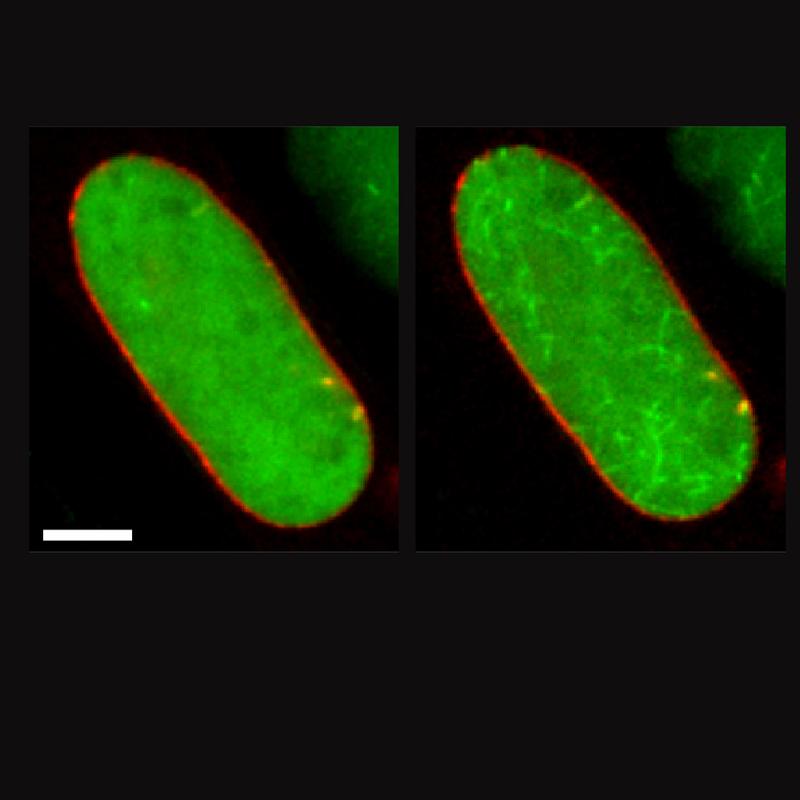 After the cell has been treated with a messenger substance (right), the green actin molecules in the red cell nucleus (left) form actin filaments that structure the genome. | Quelle: Image: Robert Grosse | Download

They play a leading role not only in muscle cells. Actin filaments are one of the most abundant proteins in all mammalian cells. The filigree structures form an important part of the cytoskeleton and locomotor system. Cell biologists at the University of Freiburg are now using cell cultures to show how receptor proteins in the plasma membrane of these cells transmit signals from the outside to actin molecules inside the nucleus, which then form threads. In a new study, the team led by pharmacologist Professor Robert Grosse uses physiological messengers to control the assembly and disassembly of actin filaments in the cell nucleus and shows, which signaling molecules control the process. The results of their study have been published in the latest Nature Communications.

“It was previously unknown just how a hormone or agent induces the cell to begin filament formation in the intact cell nucleus,” Grosse says. Back in 2013, he discovered that actin threads were formed in the nucleus when he exposed cells to serum components. In the nucleus, actin usually occurs as a single protein. It only forms filaments when a signal is given. Actin filaments resemble a double chain of beads and create possible anchor points or pathways for the structures in the cell nucleus. They give the DNA structure - for example, determining how densely packed the chromosomes in the form of chromatin are. This influences the readability of the genetic material. “What we have here is a generally valid mechanism that shows how external, physiological signals can control the cytoskeleton in the nucleus and reorganize the genome in a very short time,” Grosse explains.

Grosse is familiar with the signaling pathway that reaches into the nucleus, known as the G-protein-coupled receptor pathway. Agents, hormones, or signal transmitters bind these receptor types at the cell membrane, which is a target for a large number of clinical drugs. The receptor initiates a calcium release in the cell via a signaling cascade. The team then shows that intracellular calcium causes filaments to be formed on the inner membrane of the cell nucleus. In the study, they used fluorescence microscopy and genetic engineering methods to show how actin filaments appeared in the nucleus after physiological messengers such as thrombin and LPA bound to G-protein-coupled receptors.

In the research project within the University of Freiburg excellence cluster CIBSS - Centre for Integrative Biological Signalling Studies, Grosse is now investigating the more exact processes in the cell nucleus. “My team in Freiburg wants to find out in detail how filament formation influences the readability of the genetic material and what role the inner cell nucleus membrane plays in this process.”

Video:
The actin molecules (green) form filaments in the nucleus of mouse cells (red: nuclear membrane) as a reaction to physiological messengers outside the cell. Researchers at the University of Freiburg have now shown which signaling pathways are active here.
Video: Robert Grosse
www.pr.uni-freiburg.de/go/filamente