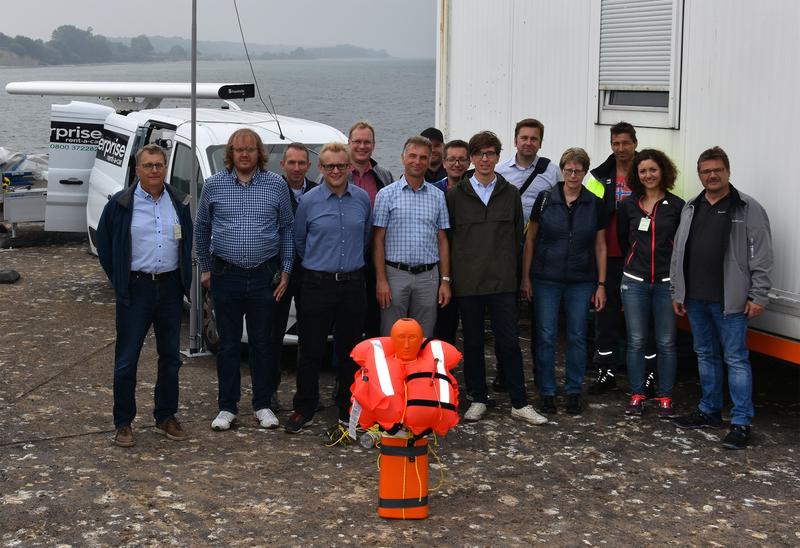 Innovative development of antennas for improved safety in sea rescue services: Funded by the German Federal Ministry of Education and Research (BMBF), the Fraunhofer Institute for High-Frequency Physics and Radar Technology FHR has joined forces with the Institute for Microwaves and Plasma Technology of the FH Aachen and Raytheon Anschütz GmbH to develop a harmonic radar system that can safely locate persons in the water. At the final presentation of the consortium partners, which also includes the company Kadematic Seenotrettungsgeräte GmbH as an associated partner, the experimental system was successfully tested in Eckernförde.

If a person goes overboard on the high seas and gets out of sight, it is almost impossi-ble to detect the person in the water using the conventional ships’ radar systems. The person in the water hardly stands out on the water surface, because the waves reflect the radar signal too much. This is where SEERAD comes in and offers a system that makes it possible to find shipwrecked people or small lifeboats even at a great dis-tance.

SEERAD uses frequency-converting transponders, so-called tags, which, when inte-grated in rescue vests, reflect the signal transmitted by a ship's radar at double the frequency. This enables the detection of very small objects over a distance of up to ten kilometers. Through the connection to the radar software of the project partner Ray-theon Anschütz these detections can be implemented for practical use, e.g. for search and rescue operations on the high seas. The Fraunhofer FHR developed both the an-tennas for the ship radar as well as the tags for SEERAD. In doing so, the Fraunhofer research team managed to accommodate in more or less the same volume of con-struction as a conventional ship's radar antenna actually two antennas operating on different frequency bands.

"We are proud that we have succeeded in making the antenna seaworthy, weather-proof against rain, sun, wind and salt water. The conditions at sea also bear a heavy burden on the mechanics and our antenna should be able to withstand this," says Dr.-Ing. Thomas Bertuch, project manager at Fraunhofer FHR.

In addition to the large antenna, the engineering skills of the Fraunhofer FHR were also needed for the very small antennas of the tags. The antennas that are integrated into the lifejackets must be compact and resistant. Another important requirement was a uniform all-round view.

During the final presentation on the Baltic Sea several tests with a prepared dummy were carried out successfully, during which a world record was actually achieved with the measurements. The scientists succeeded in locating the dummy at a distance of six kilometers with a transmission power of only 100W. The benchmark for harmonic radar systems used to be around one kilometer with a transmission power of 1000 W.

"Through the support of the BMBF it is possible to promote such projects. We have demonstrated in the consortium the fundamental functionality of the SEERAD princi-ple. However, there are still unanswered questions about the system's ability to be integrated into ship's navigation systems, the minimization of disruptions, and ensur-ing stable operation under harsh sea conditions. In support of this, policymakers are called upon to set the course, much like a safety belt or airbag in a car, to make such a system compulsory for ships in the future,” Thomas Bertuch concluded.