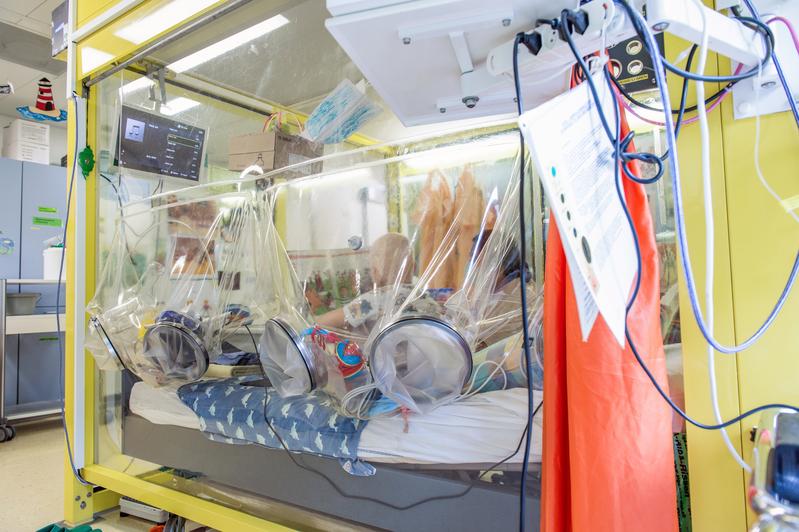 Acute lymphoblastic leukemia is the most common form of cancer affecting children in Switzerland and, unfortunately, is often incurable. Researchers from the University of Zurich and the University Children’s Hospital Zurich have now found a way to stop the driving force behind this type of leukemia at a molecular level and develop a targeted therapy.

Acute lymphoblastic leukemia (ALL) is a form of blood cancer that primarily affects children and young people. It involves large quantities of malignant progenitor cells building up in a person’s blood instead of healthy white blood cells. This is often caused by a change in genetic material, with two chromosomes fusing together to create new abnormal genes that disrupt the system controlling normal blood development. Such types of leukemia are often extremely resistant and cannot be cured with intensive chemotherapy or stem cell transplantation. In search of new ways to tackle this problem, a team of scientists from the University of Zurich and the University Children’s Hospital Zurich has been scrutinizing the molecular causes of this disorder.

For the purpose of their investigation, the researchers – led by Jean-Pierre Bourquin and Beat Bornhauser – analyzed a protein called TCF3-HLF, which is typically associated with this type of leukemia. This protein does not occur naturally; it is produced through the fusion of two chromosomes and contains elements of what are known as transcription factors, which activate the transcription of certain genes. The analyses revealed that the abnormal protein TCF3-HLF also activates a whole range of genes, but it does so in the wrong context and at the wrong point in the blood development process. This triggers the formation of malignant white blood cells and causes leukemia. “Our research shows that the abnormal protein binds to almost 500 regulatory elements in the genetic material of the human leukemia cells, activating hundreds of genes by mistake,” explains Yun Huang, lead author of the study.

The researchers also discovered that the abnormal protein does not act alone. In fact, it gathers more than 100 other proteins around it, which help to activate the genes. “We investigated the function of the individual proteins in this genetic machinery and used this to identify key elements that could be targeted through therapy,” explains Huang. He and his colleagues used the CRISPR/Cas9 method, sometimes referred to as a “gene cutter”, to detach the specific parts they had identified from the machinery. As a result, they managed to find eleven critical factors that are crucial to the build-up of malignant abnormal blood cells behind leukemia.

One of the essential components now identified is the protein EP300, a cofactor that boosts gene activation. An experiment with mice indicated that EP300 could be a very promising target for therapy. For this investigation, the researchers used a new kind of substance called A-485, which is known to bind to EP300 and inhibit its activity. When A-485 was administered to mice carrying human leukemia cells, the malignant cells died off. “It is therefore possible, in principle, to stop the fundamental driving force behind this leukemia directly and thus develop a targeted type of therapy,” says research group leader Jean-Pierre Bourquin. “The important thing now is to build a fuller picture of what goes wrong so that we can investigate the best possible way to combine specific modes of attack like this.” Given that other forms of leukemia are caused by similar mechanisms, it may also be possible to identify a common denominator for developing new drugs to combat cancer.

Collaborations and funding
The collaboration with the working groups led by Marie-Laure Yaspo from the Max Planck Institute for Molecular Genetics in Berlin and Matthias Gstaiger from ETH Zurich was an important factor in this study. The project was carried out as part of the University of Zurich’s Clinical Research Priority Program (CRPP) “Precision Hematology/Oncology.”