Giant magnetic ropes in the outskirts of a spiral galaxy 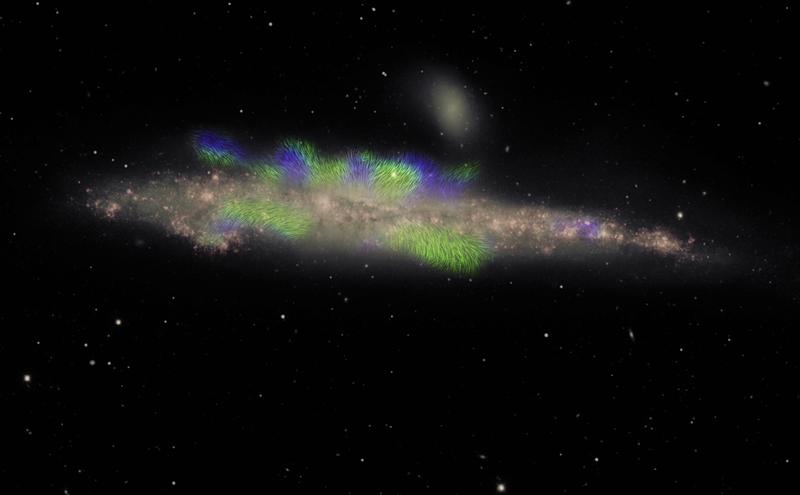 An international consortium led by scientists from the MPIfR in Bonn investigated polarized radio emission from the galaxy NGC 4631 at the VLA radio telescope. They detected for the first time a regular magnetic field over scales of several thousands of light years in the halo of NGC 4631. Moreover, they discovered reversals in the large-scale magnetic field, which they call giant magnetic ropes. This discovery will strengthen the impact of large-scale dynamo theories for spiral galaxies. Further, the regular halo fields may be regarded as a link to intergalactic magnetic fields and will help to understand their origin which is a mystery so far.

NGC 4631, the “Whale Galaxy”, located 25 million light-years from Earth in the constellation Canes Venatici, is about 80 thousand light-years across, slightly smaller than our own Milky Way. It was discovered by the famous German-born British astronomer Sir William Herschel in 1787. This galaxy has a companion, NGC 4627, a small elliptical galaxy.

“This is the first time that we have clearly detected what astronomers call large-scale, coherent, magnetic fields far in the halo of a spiral galaxy, with the field lines aligned in the same direction over distances of a thousand light-years. We even see a regular pattern of this organized field changing direction,” said Marita Krause, scientist at the Max Planck Institute for Radioastronomy (MPIfR) in Bonn, Germany, and corresponding author of the publication.

An international team of astronomers who are part of a project called the Continuum HAlos in Nearby Galaxies -- an EVLA Survey (CHANG-ES), said the image indicates a large-scale, coherent magnetic field that is generated by dynamo action within the galaxy and spirals far outward in the form of giant magnetic ropes perpendicular to the disk. The CHANG-ES project is led by Judith Irwin of Queen's University in Ontario, Canada, a co-author of the paper.

“At the moment, I'm afraid that we are a little bit like the blind men and the
elephant, since each time we sample the magnetic field in a different way we reach a different conclusion about its nature! However, our models suggest this field includes smaller, twisting cones emanating from the spiral arms,” said Richard Henriksen, also of Queen's University.

The results were achieved by combining data from multiple observations with the VLA's giant dish antennas arranged in different configurations to show both large structures and finer details within NGC 4631. The naturally-emitted radio waves from that galaxy were analyzed to reveal the magnetic fields, including their directions.

The scientists said the techniques used to determine the direction of the magnetic field lines can now be used on other galaxies to answer important questions about whether coherent magnetic fields are common in galactic halos and what their shapes are.

The regular halo fields may also be regarded as a link to intergalactic magnetic fields and will help to understand their origin which is a mystery up to now.

CHANG-ES, the “Continuum Halos in Nearby Galaxies, an EVLA Survey” project, brings together scientists from all over the globe in order to investigate the occurrence and origin of galaxy halos by means of radio observations.

The extended spherical area around the disk of a spiral galaxy is called halo. It forms the interface between the well-studied disks of galaxies and the intergalactic medium.

The results are based on the doctoral thesis of Silvia Carolina Mora-Partiarroyo, the first author, at MPIfR and Bonn University. The thesis was supervised by Marita Krause.