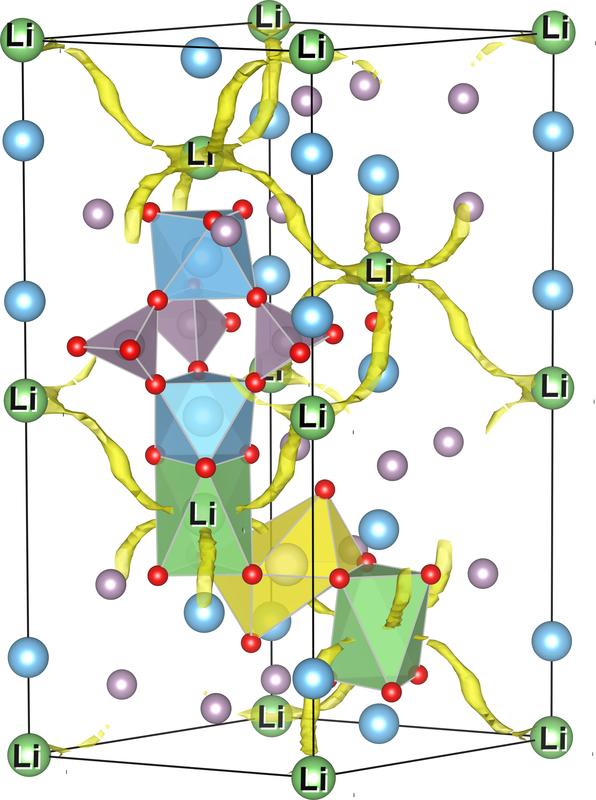 High-performance, long-lasting energy storage devices are crucially important for many future-oriented technologies: e.g. for electromobility, for mobile end devices such as tablets and smartphones as well as for the efficient use of energy from renewable sources. Dr. Daniel Mutter from the Fraunhofer IWM was able to clarify what the chemical composition of solid ceramic electrolytes should be in order to ensure good performance in lithium-ion batteries. The research was published in the Journal of Applied Physics. Such solid electrolytes are more environmentally friendly than traditional liquid electrolytes and could make lithium-ion batteries significantly safer and more efficient.

“The idea that solid ceramic electrolytes could be a highly promising alternative to traditional liquid electrolytes in batteries and accumulators is not something new in material science”, explains Dr. Daniel Mutter, a scientist from the Materials Modeling group at the Fraunhofer Institute for Mechanics of Materials (IWM) in Freiburg. Compared to traditional liquid electrolytes, solid electrolytes are safer during ongoing operation: they pose a much lower risk of explosion and, in the event of damage – e.g. due to a crash – there is no release of acid, which may otherwise cause burns and poisoning.

In general, the ionic conductivity of ceramic materials is lower than that of liquid electrolytes. However, the class of so-called NZP ceramics promises a high degree of ionic conductivity: their structural organization enables the existence of “migration paths” along which lithium ions can easily travel. This makes them an interesting candidate for high-performance solid electrolytes in lithium-ion batteries.

However, what remained unclear until now was why certain compounds are more efficient than others and what compounds actually perform particularly well. The requirements for the material properties of battery electrolytes are stringent: their ionic conductivity must be high and the chemical elements used must be both non-toxic and abundantly available in the earth’s crust.

Dr. Mutter used atomistic simulations to identify several combinations of chemical elements for NZP ceramics that are particularly promising in view of these requirements. “This computer-based research enables us to make definitive statements on the properties and stability of various chemical compounds without actually having to synthesize these compounds in a lab”, explains the researcher. The benefit: the actual synthesis is expensive and requires resources. He performed the simulations at the mainframe of the Steinbuch Supercomputer Center of the Karlsruhe Institute of Technology.

“We can potentially combine these particularly promising solid ceramic electrolytes with very efficient lithium-metal anodes – which is not possible with the liquid electrolytes in use today, because these react violently with metallic lithium and damage the battery in the process”, explains Dr. Mutter. “In the next step, we could conduct practical tests with our partners to verify whether our predicted electrolyte materials increase the ionic conductivity as significantly as expected, and whether batteries using these electrolytes are able to achieve a much higher energy and power density”, says the physicist. More specifically, this would mean: shorter charging times combined with longer operation, which would be particularly beneficial for electromobility. In addition, this configuration would also mean reduced battery weight, since lithium-metal anodes are significantly lighter for the same capacity than the previously used graphite anodes.

Lighter batteries made with elements that are abundantly found

The chemical elements that make up the electrolyte materials researched by Dr. Mutter are abundantly available in the earth’s crust in Europe and, by comparison, readily degradable. This eliminates the need for certain elements like cobalt, which is used in the lithium-ion batteries of smartphones and is often imported from the Congo.

Beyond predicting highly promising material compositions, Dr. Mutter’s research contributes towards improving our understanding of the atomic processes in NZP ceramics. He was able to establish that the migration energy necessary for lithium ion migration depends on the oxygen environment around the ion migration path in a different way than previously thought. The identified structure-property relationships enable us to make significantly more substantiated predictions about the effects of fundamental element allocations on the structural framework as well as the ionic conductivity of NZP ceramics.

Dr. Mutter’s analyses are part of a DFG-funded research project on the topic of “Production and characterization of solid ceramic electrolytes with high lithium ion conductivity” that he executed in cooperation with the Karlsruhe Institute of Technology (KIT) and the Technical University of Munich. For his outstanding scientific achievements, Dr. Mutter received the 2019 Mechanics of Materials Award from the Fraunhofer IWM. The original paper on the topic was published in the Journal of Applied Physics (https://doi.org/10.1063/1.5091969).

Info box: What are NZP ceramics?

The class of NZP ceramics has been known since the 1960s and is also designated by the term NASICON. It received its name from the chemical structure NaZr2(PO4)3, whose properties were discovered to be particularly beneficial for the production of solid electrolytes. The stability of NZP ceramics is made possible by a characteristic “lantern-like” structure where polyhedrons composed of oxygen atoms wrap around the other elements. This results in a three-dimensional network of migration paths for lithium ions, which enables the ceramic’s high degree of ionic conductivity. The chemical elements sodium, zirconium and phosphorus can be replaced by other elements. Thus, as shown in the diagram, sodium can be replaced by lithium and zirconium can be replaced by titanium. The replaceability of elements makes it possible to analyze the material properties for a great number of element combinations using computer simulations.