How moon jellyfish get about 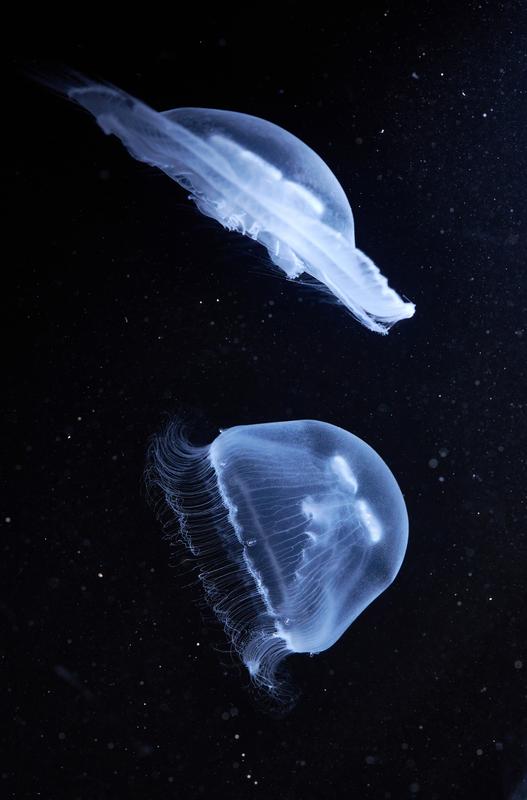 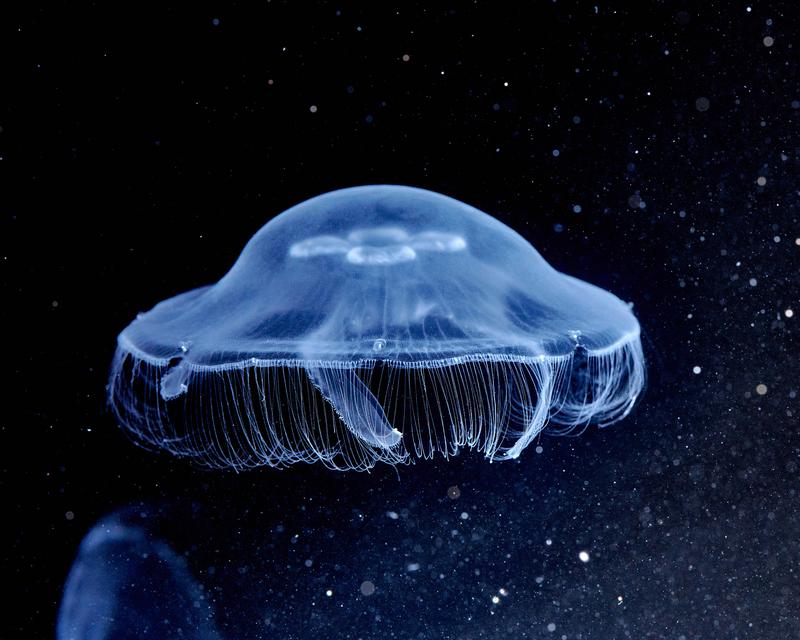 Moon jelly (Aurelia aurita): The picture was taken in the joint aquarium of the Institutes of Genetics and Zoology of the University of Bonn. | Quelle: (c) Photo: Volker Lannert/Uni Bonn | Download
❮ ❯

With their translucent bells, moon jellyfish (Aurelia aurita) move around the oceans in a very efficient way. Scientists at the University of Bonn have now used a mathematical model to investigate how these cnidarians manage to use their neural networks to control their locomotion even when they are injured. The results may also contribute to the optimization of underwater robots. The study has already been published online in the journal "eLife"; the final version will appear soon.

Moon jellyfish (Aurelia aurita) are common in almost all oceans. The cnidarians move about in the oceans with their translucent bells, which measure from three to 30 centimeters. "These jellyfish have ring-shaped muscles that contract, thereby pushing the water out of the bell," explains lead author Fabian Pallasdies from the Neural Network Dynamics and Computation research group at the Institute of Genetics at the University of Bonn.

Moon jellyfish are particularly efficient when it comes to getting around: They create vortices at the edge of their bell, which increase propulsion. Pallasdies: "Furthermore, only the contraction of the bell requires muscle power; the expansion happens automatically because the tissue is elastic and returns to its original shape."

Jellyfish for research into the origins of the nervous system

The scientists of the research group have now developed a mathematical model of the neural networks of moon jellyfish and used this to investigate how these networks regulate the movement of the animals. "Jellyfish are among the oldest and simplest organisms that move around in water," says the head of the research group, Prof. Dr. Raoul-Martin Memmesheimer. On the basis of them and other early organisms, the origins of the nervous system will now be investigated.

Especially in the 50s and 80s of the last century, extensive experimental neurophysiological data were obtained on jellyfish, providing the researchers at the University of Bonn with a basis for their mathematical model. In several steps, they considered individual nerve cells, nerve cell networks, the entire animal and the surrounding water. "The model can be used to answer the question of how the excitation of individual nerve cells results in the movement of the moon jellyfish," says Pallasdies.

The jellyfish can perceive their position with light stimuli and with a balance organ. If a moon jellyfish is turned by the ocean current, the animal compensates for this and moves further to the water surface, for example. With their model, the researchers were able to confirm the assumption that the jellyfish uses one neural network for swimming straight ahead and two for rotational movements.

Wave-shaped propagation of the excitation

The activity of the nerve cells spreads in the jellyfish's bell in a wave-like pattern. As experiments from the 19th century already show, the locomotion even works when large parts of the bell are injured. Scientists at the University of Bonn are now able to explain this phenomenon with their simulations: "Jellyfish can pick up and transmit signals on their bell at any point," says Pallasdies. When one nerve cell fires, the others fire as well, even if sections of the bell are impaired.

However, the wave-like propagation of the excitation in the jellyfish's bell would be disrupted if the nerve cells fired randomly. As the researchers have now discovered on the basis of their model, this risk is prevented by the nerve cells not being able to become active again so quickly after firing.

The scientists hope that further research will shed light on the early evolution of the neural networks. At present, underwater robots are also being developed that move on the basis of the swimming principle of jellyfish. Pallasdies: "Perhaps our study can also help to improve the autonomous control of these robots."