Gmelin-Beilstein medal will be awarded to Guillermo Restrepo 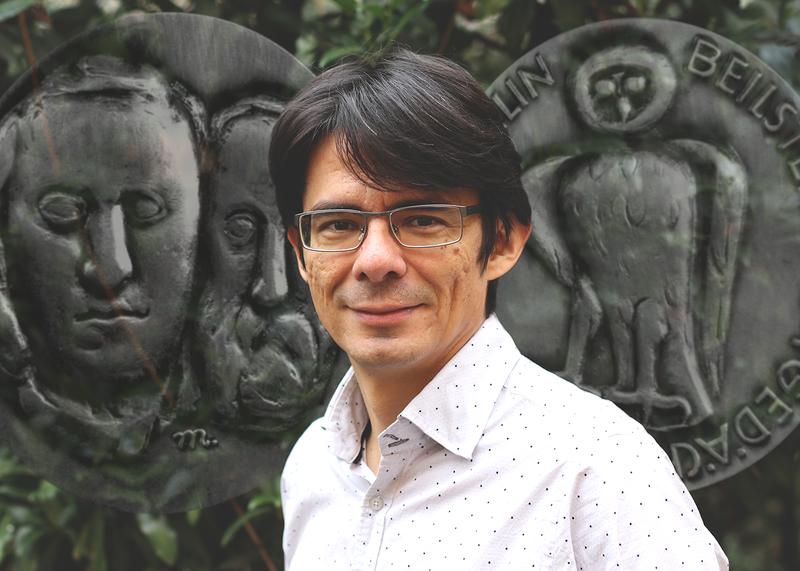 Prof. Dr. Guillermo Restrepo showing the medal in the background | Quelle: © Thomas Endler, MPI for Mathematics in the Sciences | Download

The Gesellschaft Deutscher Chemiker (GDCh – German Chemical Society) honors Prof. Dr. Guillermo Restrepo with the Gmelin-Beilstein memorial medal. The scientist from Max Planck Institute for Mathematics in the Sciences in Leipzig is recognized for his scientific expertise in the fields of mathematics, history and philosophy of chemistry. "His quantitative and computer methods are important complements to the conventional approaches in understanding the history of chemistry," said GDCh President Prof. Peter Schreiner. The award ceremony will take place on March 30 at the chemistry lecturers' conference in Dresden.

The Colombian-born Guillermo Restrepo is the first South American scientist to be awarded by the GDCh with the silver medal and accompanying prize money. He is especially honored for his innovative approaches to quantitative and computer methods, which contribute to a better understanding of the history of chemistry. For example, his research has shown the exponential growth of new chemical compounds over the past two hundred years. He also presented the effects of the world wars on chemical production.

His mathematical and computational approaches in cheminformatics contribute to the investigation of key questions in the history, philosophy and sociology of chemistry. Restrepo has inspected more than 200 years of history concerning chemical production and was able to uncover interesting trends, which include the workings of how chemists have historically combined starting materials to reach new susbtances. The use of bibliometrics, a statistical method to analyze texts and publications, allowed him to explore the evolution of mathematical chemistry, as a sub-discipline of chemistry. These methods have also enabled Restrepo to analyse the history of the Nobel Prize in chemistry and to detect some bias. His work in the philosophy of chemistry is mainly devoted to formalising key concepts of chemistry such as chemical substance, element and periodic system.

Guillermo Restrepo studied chemistry at the Universidad Industrial de Santander in Colombia. He conducted his PhD studies in Germany, where he earned his Dr. rer. nat. at the University of Bayreuth in 2008. As a Postdoctoral researcher he worked in the department of mathematics at the University of Bayreuth and at the department of marine sciences at Texas A&M University before becoming a visiting professor at Universidad de los Andes in Colombia. He was also professor of chemistry for about a decade at Universidad de Pamplona in Colombia. In 2014 he was awarded an Alexander von Humboldt Fellowship which allowed him to become a visiting professor from 2015 to 2017 at the Interdisciplinary Center for Bioinformatics at the University of Leipzig with which he is still closely scientifically connected. Since 2017 he is a member of the "Dynamical Systems" group at the Max Planck Institute for Mathematics in the Sciences in Leipzig.

The Gmelin-Beilstein Medal is awarded biennially to domestic and international individuals who have produced outstanding contributions to the history of chemistry, chemical literature or chemical information. The medal was instigated by GDCh association in 1954 in memory of the German chemists Leopold Gmelin and Friedrich Beilstein for their creation of essential compendia of chemical compounds.