Hydrogen energy at the root of life 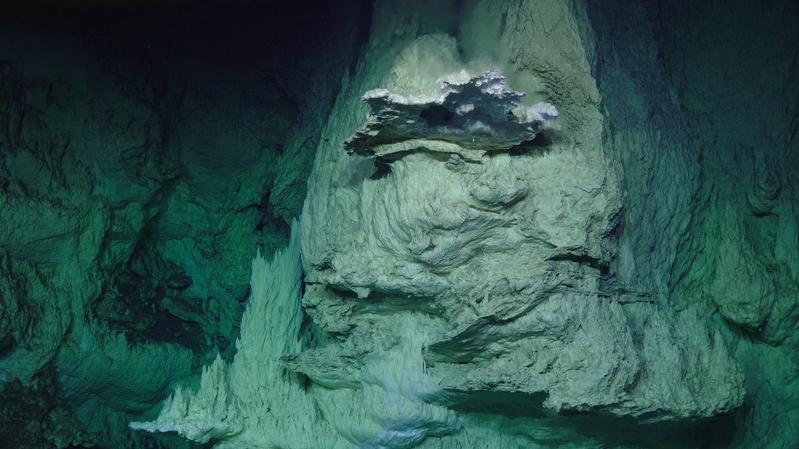 A team of international researchers in Germany, France and Japan is making progress on answering the question of the origin of life. It could be that life originated from chemical reactions catalysed by minerals in submarine hydrothermal vents. These reactions still drive the metabolism of the most primitive forms of life today. As the team has now reported in the journal Nature Ecology and Evolution, hydrogen was both the key to and the fuel for the earliest biochemical processes that marked the beginnings of life.

Since the discovery of submarine hydrothermal vents around 40 years ago, these natural chemical reactors have been a focus for evolutionary researchers searching for the origin of life. The vents emit hot water containing minerals, including simple but reactive chemical substances such as hydrogen gas (H2) and carbon dioxide (CO2). Conditions like these could have resulted in the very first biochemical reactions, and thus in the emergence of the first free living cells.

The starting point of such primitive metabolism of the first microbes is carbon dioxide and hydrogen gas. Microbes that live from these substances first convert the two gases into formic acid (formate), acetate and pyruvate (salts of acetic acid and pyruvic acid). They then use these to make all of their organic material through a dense roadmap of complicated reactions. What chemist Dr. Martina Preiner from the Institute of Molecular Evolution of Heinrich Heine University Düsseldorf (HHU) and an international team now show is that precisely these basic building blocks of life emerge all by themselves in a lab environment when H2 and CO2 are left to react in the presence of simple minerals in hydrothermal conditions.

For the last 20 years, Prof. Dr. William Martin, Head of the Institute of Molecular Evolution, has been cataloguing the many parallels between metal-catalysed reactions in metabolism and chemical reactions at hydrothermal vents. Prof. Martin says: “These reactions based on H2 and CO2 that reflect the origins of the first biochemical processes can now be simulated in a lab in Düsseldorf, allowing us to mimic the earliest development phases of life.”

Together with researchers from the Max Planck Institute for Coal Research in Mülheim/Ruhr, the University of Strasbourg and the National Institute of Advanced Industrial Science and Technology in Japan, Dr. Preiner has simulated these very simple reactions in a lab environment. They have been able to demonstrate that H2 and CO2 organize into formate, acetate and pyruvate overnight at temperatures of 100 degrees Celsius as long as a few simple mineral catalysts are present – catalysts that themselves are formed in hydrothermal vents. Martina Preiner emphasises the fact that no microbial metabolism is needed. “The chemical reactions are surprisingly simple. The main products created are exactly those used by the earliest cells as a basis for their further metabolism.”

Dr. Harun Tüysüz and his team from the Max Planck Institute in Mülheim have designed nanostructured solid catalysts for the experiments: “We observe a distinct structure-activity relationship of the solid catalysts for CO2 reduction in the origins of life context.”

Serendipity would have it that two other working groups were also studying similar processes. A team of Strasbourg-based chemists working under Prof. Dr. Joseph Moran and Dr. Kamila Muchowska were using metallic iron instead of H2. The Japanese team working with microbiologist Dr. Kensuke Igarashi was examining reactions of H2 and CO2 over iron-sulphide catalysts. All of the groups observed the same products. Prof. Moran says: “Metabolism appears to have developed in a surprisingly natural way”.

The origins of life leads to a ‘chicken or egg’ problem. In addition to the simple CO2-H2 reactions, cells have to form a large number of more complex modules in order to grow and function. Modern cells generally feature proteins as catalysts, the construction of which is encoded in the genes. But what came first, the proteins or the nucleic acids? The study now published suggests that they were preceded in evolution by reactions catalysed by metals and minerals, and that both proteins and nucleic acids emerged from those reactions. The metals found in modern proteins are relicts of these biochemical beginnings.

The study also sheds important light on the classical problem in origin of life research: What energy was available to the earliest life forms? Preiner and colleagues showed that the reactions of H2 with CO2 under the same conditions as those prevalent in hydrothermal vents also release energy. When producing simple compounds such as acetate, enough energy is created to allow primitive microbes to fuel their further metabolism.

This means that the fuel for original cells was hydrogen, which was formed in huge quantities in submarine environments when the Earth was young and continues to be formed today. Not only is hydrogen the cleanest of all energy forms – producing just water when combusted – it may also be the spark that created life itself. The decisive factors were having the right conditions and the right catalysts in place.

The study was funded by the European Research Council, the Volkswagen Foundation, the German Research Foundation, the Max Planck Society, the Japan Society for the Promotion of Science, and the Japanese Ministry of Education, Culture, Sports, Science and Technology.