Total lunar eclipse: observing the Earth as a transiting planet 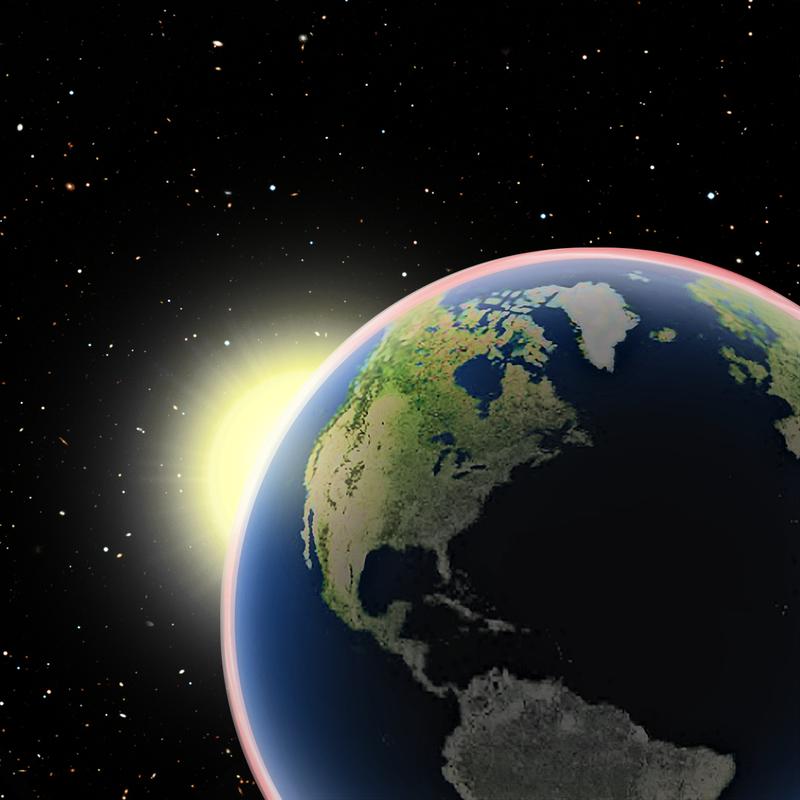 The Sun as seen from the Tycho crater on the Moon during a total lunar eclipse on Earth. When the Sun sets behind the northern Pacific, its disk completely disappears behind Earth. | Quelle: AIP/Strassmeier/Fohlmeister | Download

Astronomers succeeded in recording sunlight shining through the Earth’s atmosphere in a manner similar to the study of distant exoplanets. During the extraordinary occasion of a lunar eclipse, the Large Binocular Telescope observed the light that was filtered by the Earth’s atmosphere and reflected by the Moon in unique detail. In addition to oxygen and water, atomic spectral lines of sodium, calcium and potassium were detected in our atmosphere in this way first time.

When an exoplanet transits in front of its host star, astronomers may be able to record both the dimming of the starlight that the planet blocks and also the starlight that shines through the planet’s atmosphere. While it is only a tiny signal, it contains the imprint of the planet’s chemical and physical signature and provides the principal possibility to measure the planet’s atmospheric constituents. In astrophysics, this technique is called transmission spectroscopy, and is a relatively young technique booming since many exoplanet transits were detected from space. “While, so far, only applicable to super-sized Jupiters, that is oversized Jupiter-like planets orbiting close to their host star, we are most interested in Earth-like planets and whether we could detect more complex molecular signatures in an exo-Earth transmission spectrum possibly even hinting for life”, explains Klaus Strassmeier from the Leibniz Institute for Astrophysics in Potsdam (AIP), the leading author of the now published study. „While not yet doable for any Earth-like exoplanet transit, a total lunar eclipse, which is a total solar eclipse when seen from our own Moon, is nothing else than a transit of our own Earth, and indirectly observable.”

The sunlight that passes through the Earth’s atmosphere before it reaches the Moon and back reflects to Earth is called the Earthshine. The Earth’s atmosphere contains many by-products of biological activity, such as oxygen and ozone in association with water vapor, methane and carbon dioxide. These biogenic molecules present attractive narrow molecular bands at optical and near infrared wavelengths for detection in atmospheres of other planets. Taking the Earth as the prototype of a habitable planet, Earthshine observations provide the possibility to verify biogenic and related chemical elemental presence with the same techniques that otherwise are being used for observing stars with super Jupiter planets. Earthshine is thus an ideal test case for future exo-Earth detections with the new generation of extremely large telescopes.

January 2019 featured a total lunar eclipse. The Moon dimmed by a factor of 20,000 during totality which is the reason why the light gathering capability of the 11.8 m Large Binocular Telescope (LBT) in Arizona was needed for the observations. Additionally, the high spectral resolution of the Potsdam Echelle Polarimetric and Spectroscopic Instrument (PEPSI) was necessary to separate the expected tiny spectral-line absorptions of the Earth’s atmosphere from the normal solar spectrum at unprecedented spectral resolution and in polarized light.

“PEPSI has already made significant contributions to the study of exoplanets through the observation of their transit in front of their sun.” adds Christian Veillet, LBT Observatory's Director. “Looking at the Earth as an exoplanet thanks to a total lunar eclipse well-suited to LBT's location in Arizona, and adding polarimetry to the exquisite resolution of the PEPSI spectrograph, resulted in the detection of sodium, calcium, and potassium in Earth's atmosphere."