Wendelstein 7-X fusion device at Greifswald to be upgraded 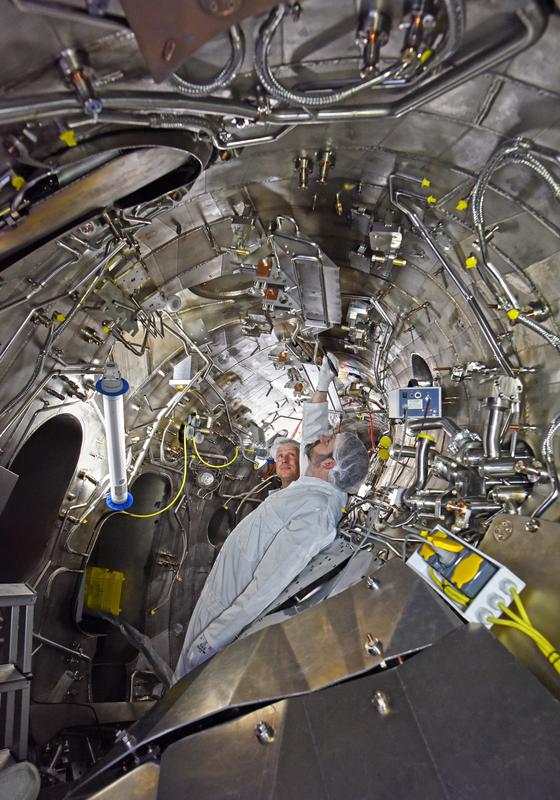 • Inside the plasma vessel: The previous cladding with carbon tiles has been abandoned; the vessel is ready for installation of the new water-cooled wall protection. | Quelle: (Photo: IPP, Torsten Bräuer) | Download 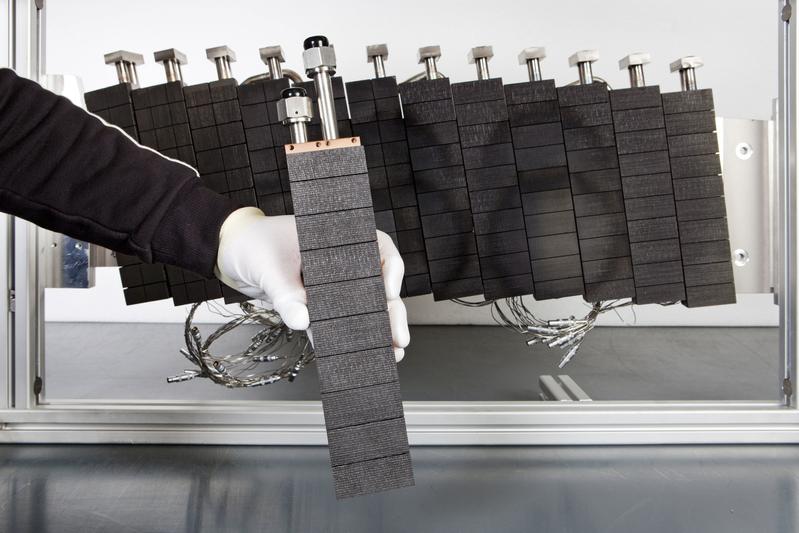 • One of the 890 divertor elements. In the background: the prototype of a divertor plate assembled from these elements after a heat test in IPP’s GLADIS test rig. The stress marks are clearly | Quelle: (Photo: IPP, Michael Herdlein) | Download
❮ ❯

The next round of the stepwise expansion of the Wendelstein 7-X fusion device at Max Planck Institute for Plasma Physics (IPP) at Greifswald is in full swing. Water-cooled inner cladding of the plasma vessel will make the facility suitable for higher heating power and longer plasma pulses. Production of the new cladding’s centrepiece, the so-called divertor, was taken over by the institute’s Garching branch. For tomorrow, the final delivery to Greifswald is scheduled, where the preparations for installation of the components have been completed. The installation work will last until well into next year. Wendelstein 7-X, the world's largest stellarator fusion device, is to investigate the suitability of such devices for power plants.

At the end of 2018, the experiments on Wendelstein 7-X were temporarily terminated after two successful work phases (see PI 11/18). Upgrading of the plasma vessel has been ongoing since then. “First of all, most of the old components had to be taken out. Installation of the new ones can now begin,” says Prof. Dr. Hans-Stephan Bosch, whose division is responsible for technical operation of the device. Whereas most of the wall protection components were previously operated uncooled, large sections of the wall will be water-cooled starting with the next round of experiments: “This will then enable Wendelstein 7-X to generate plasma pulses lasting up to 30 minutes”, states Professor Bosch.

Challenging manufacture
In the high-performance experiments planned, the new water-cooled divertor plates, which replace the previous uncooled ones, are designed to withstand a load of up to ten megawatts per square metre – like a space shuttle re-entering the Earth’s atmosphere. Without water cooling, however, the heat-resistant divertor tiles made of carbon-fibre-reinforced carbon could not withstand this load for the intended 30-minute plasma pulses. They are therefore welded onto water-cooled plates made of a copper-chromium-zirconium alloy. The coolant, supplied by small steel tubes, ensures that the heat energy is removed.

Each of the ten curved divertor strips consists of twelve of these plates, which in turn are composed of individual elements. In total, these 890 elements comprise almost half a million individual parts, from the heat-resistant surfaces to the special screws.

The high-performance components are the result of a long development, manufacturing and testing process carried out by the Integrated Technical Centre (ITZ) and the “Components in the Plasma Vessel” work group at IPP in Garching in cooperation with industrial companies. “The complex geometry of the components was particularly challenging, given the high level of accuracy and reliability required,” explains IPP engineer Dr. Jean Boscary, who headed production and assembly of the “big puzzle”: “There should be no water leakage later in Wendelstein 7-X”.

Accordingly, already the preparatory work was extensive: In 2003, the development and production contract for the divertor elements was concluded with an industrial company. After four pre-series and more than 60 prototypes, five years of series production could start in 2009.

To complete a divertor element, 82 manufacturing steps and 44 tests were necessary. The surface of each of the 16,000 carbon tiles had to be milled three-dimensionally into shape – with tolerances of sometimes only 0.1 millimetres to avoid any overheating of protruding edges. The joining technique between carbon and copper alloy was specially developed for Wendelstein 7-X.

At IPP in Garching, the divertor elements were then joined together on steel frames to form plates. Cooling pipes and cooling water distributors were joined by means of a special welding technique developed at the ITZ: “Among the 2,000 welded joints, the subsequent tests were only able to detect two leaks,” says Dr. Boscary. In other respects, too, there were always quality assurance tests between the individual work steps. For production control, for example, the load capacity of the parts was examined in the Garching’s GLADIS heat test rig. The experience gained in this “largest heat protection project in fusion research to date” is unique worldwide, Jean Boscary emphasizes. All ten divertor strips have now been completed. A major part has already been delivered to IPP at Greifswald; the last transport is scheduled for tomorrow.

Challenging assembly
At Greifswald, everything is prepared for installation of the high-performance components: In particular, the water pipes are installed in the plasma vessel, a total of 4.5 kilometres. "In the meantime, we have started laying the complex water pipes that bridge the last 40 centimetres between the vessel wall and the divertor plates," explains assembly head Dr. Lutz Wegener. Later on, the plates must fit exactly to these connections. Although the extremely tricky work had previously been practised in a one-to-one model – "virtually a double assembly," says Dr. Wegener – there are surprises when installing the 240 fitting pipes. The great tightness between the components makes welding a challenge, for which a special precision technique is used anyway. Often new designs and new manufacturing are necessary. In the narrow space also many screws are difficult to access for tools and a solution has to be found on a case-by-case basis: "Welded or screwed – the connections should remain tight for the next twenty years".

Compared with these tasks, subsequent installation of the divertor plates should be easier. “We have already developed special tools for this purpose – for example to lift and move the 70-kilogram plates,” says Lutz Wegener. Even the kick plate, on which the technicians in the vessel walk over the sensitive divertor and wall protection tiles, was a separate development project: it had to guarantee safe standing in a very confined space and be adapted to the unusual shape of the plasma vessel. On the other hand, it must not damage the wall structures or lead to any impurities that could later perturb the plasma.

Plasma operation is expected to resume at the end of 2021. It is planned to begin with low water cooling, low heating power and short plasma pulses in order to allow testing of all installations in operation after the long break in experiments. With full cooling, longer pulses with plasma energies of up to one gigajoule should be possible – a target that will be slowly approached. Instead of the previous hundred-second pulses with heating powers of two megawatts and plasma energies of 200 megajoules, the cooled high-performance divertor should later allow pulses lasting up to 30 minutes at full heating power. Wendelstein 7-X will then be able to demonstrate the essential advantage of stellarators, namely their ability to operate continuously.

Background
The aim of fusion research is to develop a power plant favourable to the climate and environment. Like the sun, it is to derive energy from fusion of atomic nuclei. Since the fusion fire only ignites at temperatures exceeding 100 million degrees, the fuel – a low-density hydrogen plasma – must not come into contact with cold vessel walls. Confined by magnetic fields, it levitates almost contact-free inside a vacuum chamber.

The magnetic cage of Wendelstein 7-X is created by a ring of 50 large superconducting magnetic coils. Their specific forms are the result of elaborate optimisation calculations. Although Wendelstein 7-X will not generate any energy, the facility is intended to prove that stellarators are suitable for use in power stations. With Wendelstein 7-X, the quality of the plasma confinement in a stellarator is to reach the level of competing tokamak-type systems for the first time.