Life expectancy crisis in the USA: The opioid crisis is not the decisive factor 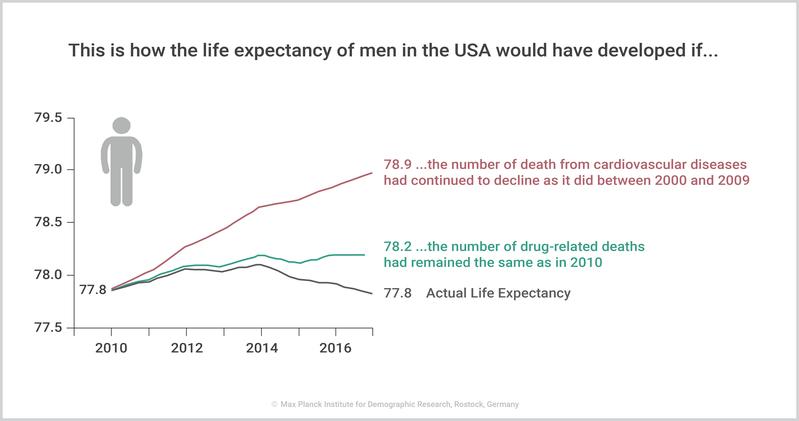 Life expectancy in the USA is no longer rising. This stagnation has long been largely attributed to increasing numbers of drug deaths due to the opioid crisis. But Mikko Myrskylä and colleagues have now shown that deaths from cardiovascular diseases are having a much larger impact on life expectancy.

Over each decade of the past century, life expectancy in the USA was rising by two years. This is no longer the case. Since 2010, life expectancy has not been improved. Up to now, this change in trend has mainly been attributed to the rising number of drug deaths due to the opioid crisis.

But Mikko Myrskylä, Director of the Max Planck Institute for Demographic Research in Rostock, together with Neil Mehta and Leah Abrams from University of Michigan has now shown a stall in declining cardiovascular deaths is a more likely explanation for the end of life expectancy improvement. They have published their findings in the scientific journal PNAS.

The remaining life expectancy of 25-year-old Americans would have risen by 1.1 years between 2010 and 2017 if deaths from cardiovascular diseases had declined as much over that period as they did between 2000 and 2009.

The Max Planck Institute for Demographic Research (MPIDR) in Rostock investigates the structure and dynamics of populations. It focuses on issues of political relevance such as demographic change, aging, fertility, the distribution of work over the course of life, as well as aspects of gender issues and medicine. The MPIDR is one of the largest demographic research bodies in Europe and one of the worldwide leaders in the field. It is part of the Max Planck Society, the internationally renowned German research society.