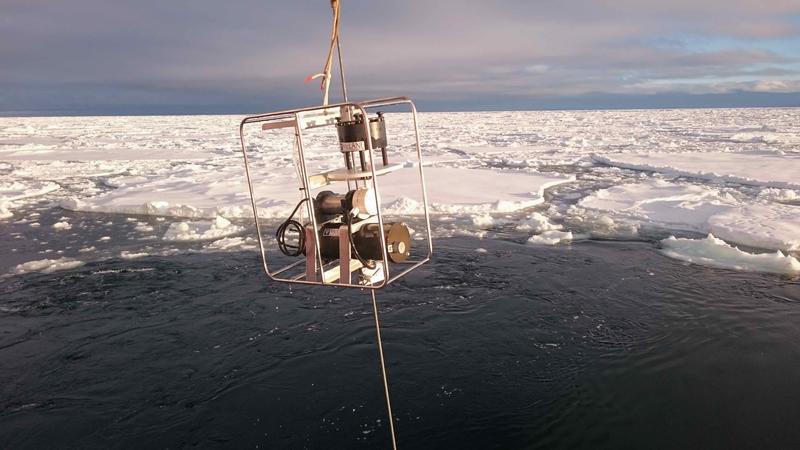 Working in the Arctic Fram Strait, scientists from the Alfred Wegener Institute, Helmholtz Centre for Polar and Marine Research (AWI) have found microplastic throughout the water column with particularly high concentrations at the ocean floor. Using model-based simulations, they have also found an explanation for this high level of pollution. According to their findings, the two main ocean currents in Fram Strait transport the microscopically small plastic particles into the region between Greenland and Spitsbergen from both the Arctic and the North Atlantic. While passing through the Strait, many particles eventually drift to the seafloor, where they accumulate. The experts report on this phenomenon in a study just released in the esteemed journal Environmental Science & Technology.

Located between the northeast coast of Greenland and the Svalbard archipelago, Fram Strait is the only deep passage between the Arctic and Atlantic Oceans. In its waters, which reach depths of 5,600 metres, two opposing currents flow right by one another like an underwater highway. In the eastern “lane” the West Spitsbergen Current transports warm water north from the Atlantic, while in the other lane the East Greenland Current moves sea ice and frigid water south from the Arctic. This extraordinary combination of circumstances is most likely the reason why experts from the Alfred Wegener Institute, Helmholtz Centre for Polar and Marine Research while collecting water and seafloor samples at the Arctic deep-sea observatory HAUSGARTEN in Fram Strait, detected extremely high quantities of microplastic particles in the sediment, and intermediate levels in the water column in the summer of 2016.

“We found the highest concentration of microplastic particles in water at our northernmost sampling spot near the sea-ice edge,” reports AWI biologist and first author Mine Tekman. In the area technically referred to as the marginal ice zone, one cubic metre of surface water contained more than 1,200 microplastic particles, though this hardly came as a surprise to the researchers. “From previous studies we knew that the Arctic sea ice can contain as much as 12,000 microplastic particles per litre of meltwater. When this ice reaches the end of its journey and melts in the northern Fram Strait, it most likely releases its microplastic load into the sea, which would explain the high concentration in the surface waters,” she adds.

In contrast, the level of pollution was 16,000 times higher in sediments at the bottom of Fram Strait. The analysis of sediment samples with a Fourier-transform infrared spectrometer (FTIR) revealed up to 13,000 microplastic particles per kilogramme of sediment. “This large quantity of particles and the various types of plastic we found in the sediment confirm that microplastic is continually accumulating on the seafloor of Fram Strait. In other words, the deep sea in this region is a sink for microscopically small plastic particles,” says AWI deep-sea expert and co-author Dr Melanie Bergmann.

Inflows of plastic waste from north and south alike

This view was confirmed by ocean circulation modelling, in which the experts simulated the microplastic particles’ route to Fram Strait. Depending on the particle size, type of plastic, sinking speed and water depth, some particles travelled up to 650 kilometres before coming to rest on the ocean floor. “The results of our model disprove the notion that microplastic particles could rapidly and almost vertically sink to the bottom,” says Melanie Bergmann. In fact, the plastic waste is caught by the ocean currents and can drift for tremendous distances. Especially the aggregation with organic material like algal remains is what causes the particles to sink from the surface through the water column to the seafloor.

With regard to Fram Strait, this means the majority of the plastic particles stockpiled at its bottom likely originate from remote regions; for instance, the East Greenland Current transports microplastic from the Arctic Ocean to the eastern Greenland slope. While collecting samples in its basin, the researchers above all found ethylene-vinyl acetate, a type of plastic used e.g. for coatings, lacquers, paper, packaging and shoe soles. In contrast, the West Spitsbergen Current carries particles from waters south of Spitsbergen into Fram Strait. This finding was also reflected in the plastic mix found in the respective samples.

It should also be mentioned that more than half of all plastic particles identified were smaller than 25 micrometres in diameter, roughly half the thickness of a fine human hair. “This high percentage of truly minute particles is of course troubling, as it immediately raises the question of how marine organisms respond to these minuscule bits of plastic waste,” says Melanie Bergmann. To answer this question, British colleagues are currently investigating whether the crustaceans in the AWI’s Arctic zooplankton samples have consumed any plastic.

For their part, the AWI experts now want to explore how the microplastic levels in Fram Strait change throughout the year. To this end, they’ll use devices referred to as sediment traps, which are moored at the AWI’s Arctic deep-sea observatory HAUSGARTEN and catch the various particles and marine snow that gradually descend from the sea surface, all through the year.

“The study that’s just been released offers an important snapshot in which analyses with infrared microscopes allowed us to gain a solid overview of plastic pollution in Fram Strait,” says Gunnar Gerdts, an AWI microbiologist and Head of the Microplastic Analysis Group. The experts determined that 39 percent of the particles suspended in the water came from polyamide, which is used to produce e.g. fibres for textiles and fishing nets, while nearly a quarter of all particles in the water column were identified as synthetic rubber (ethylene-propylene-diene rubber), an elastic type of plastic used e.g. in automotive and machine-building, as pond liner, for sealing roofs and house fronts, and as filler in artificial turf. In the seafloor sediments, the team primarily found particles made of chlorinated polyethylene (CPE), which is used e.g. in the manufacture of cables, hoses, films and antilock braking systems (ABS).

The samples used in this study were collected at five stations of the AWI deep-sea observatory HAUSGARTEN, which is in turn part of the long-term Arctic infrastructure FRAM, from June to July 2016. The plastic analyses were carried out at the AWI facilities on Helgoland with the aid of a Fourier-transform infrared spectrometer (FTIR), a device that subjects microparticles to infrared light and analyses their reflected radiation using a special mathematical method. Depending on their makeup, different particles will absorb and reflect different wavelengths, allowing every substance to be identified on the basis of its optical fingerprint.

The term “microplastic” refers to plastic particles, fibres, pellets and fragments with a length, width or diameter of between one micrometre – one thousandth of a millimetre – and five millimetres. A substantial amount of microplastic is released directly into the ocean by the gradual breakdown of larger plastic items. However, microplastic can also be created on land, e.g. by washing synthetic textiles or by wear on automotive tyres, which is initially suspended in the air as dust, before finding its way to the ocean via the wind or drainage canals.

The study was recently released in the journal Environmental Science & Technology under the following title:

Mine B. Tekman, Claudia Wekerle, Claudia Lorenz, Sebastian Primpke, Christiane Hasemann, Gunnar Gerdts, and Melanie Bergmann, “Tying up loose ends of microplastic pollution in the Arctic: Distribution from the sea surface, through the water column to deep-sea sediments at the HAUSGARTEN observatory”, DOI: 10.1021/acs.est.9b06981

You can find printable pictures and graphics in the online version of this press release: https://www.awi.de/en/about-us/service/press.html

Your contact partners at the Alfred Wegener Institute are:

If you have any further questions, Ulrike Windhövel, tel. +49 (0)471 4831 2008 (e-mail: media(at)awi.de) at the AWI’s Communications and Media Relations Department will be pleased to help you.