How to remove dirt easily 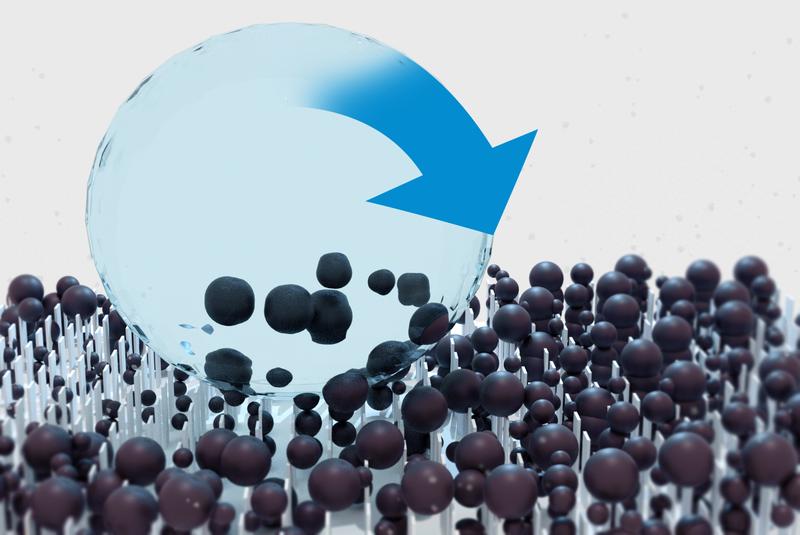 Dirt is not always dirt. Some dirt, such as dust, adheres only slightly to surfaces. But there is also dirt, such as dried paint, which sticks strongly. How can the adhesive properties of a surface be adjusted so that different types of dirt do not stick to it? This knowledge is essential to understand and minimize the contamination of surfaces by dirt particles. Scientists at the Max Planck Institute for Polymer Research (MPI-P) in Mainz have addressed this question.

All surfaces in our daily lives become dirty over time with particles such as dust, pollen or microorganisms. Therefore, surfaces are desirable that are easy to clean - i.e. surfaces where dirt particles are removed by rain, for example. Surfaces from which water drops simply roll off are promising candidates for this. Due to the low adhesion of water droplets and the resulting self-cleaning properties of the surface, they are called "super-hydrophobic" - i.e. super-water-repellent - surfaces. These surfaces are characterized by a micro-roughness, i.e. a roughness in the range of a millionth of a meter, which significantly reduces the contact area to water drops.
For a long time, however, it was not well understood how the effect of self-cleaning works on a microscopic level. How do surfaces need to be produced to function as effectively as possible? Scientists led by Prof. Dr. Doris Vollmer and Dr. Rüdiger Berger (department of Prof. H.-J. Butt) have now gained new insights into the self-cleaning process by microscopically imaging a contaminated surface. The special microscopy method, which uses a laser as light source, allowed them to image how a drop of dirt rolls over a surface and picks up dirt particles. This enabled them to show that a drop on a superhydrophobic surface contaminated with dirt particles only makes contact with the dirt particles themselves - in other words, it does not contact the surface. The size of the particles compared to the typical length scales of the surface roughness is essential for this. Depending on the surface, the particle size can vary between a few tens of nanometers and several micrometers.
"A surface works effectively when the length scale or pore size of the superhydrophobic surface is smaller than the dirt particle itself," says Doris Vollmer. "Then dirt is then completely removed, for example by rain."
In a step furthe, the scientists have verified the results obtained using laser-based microscopy by means of force measurements. For this purpose, they used a highly sensitive measuring method developed at the MPI-P, which allows the friction of drops to be measured. They were able to show that the force required to move the drop results from the number of dirt particles and the adhesive force between the particles and the surface.
These very precise force measurements enabled the authors to make another important statement: Particles are only removed effectively if the adhesion between drop and particle is greater than the adhesive force between particle and surface. Then the dirt is carried away by the drop.
Their rules have been verified with particles of different sizes and types and should facilitate the design of a dirt-repellent surface. Interestingly, particles such as dust behave similarly to carbonaceous substances such as soot.
They have published their results in the renowned journal "Science Advances".