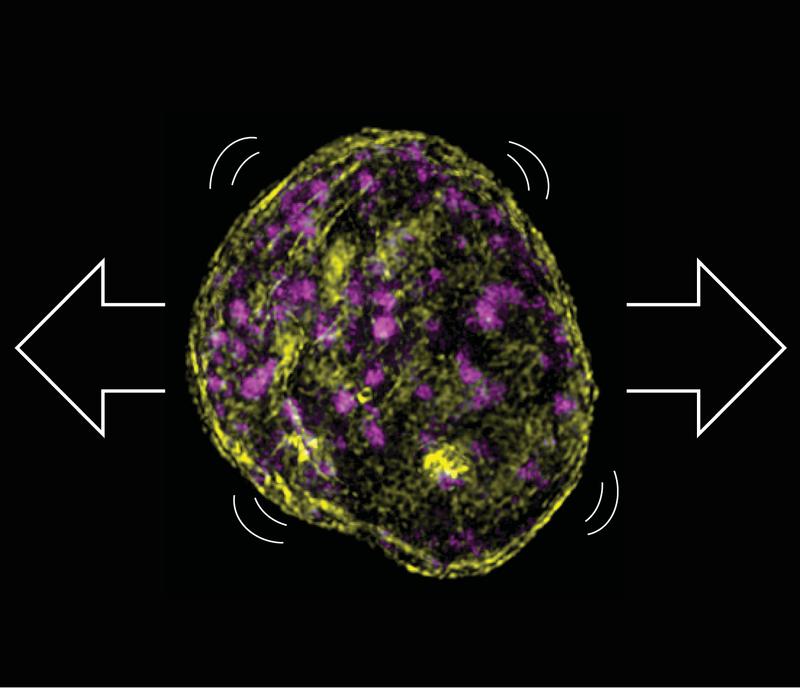 In everyday life, our tissues, for example skin and muscle, are stretched, pulled and compressed without causing damage to the cells or the DNA. A team of researchers led by Sara Wickström from the Max Planck Institute for the Biology of Ageing and the CECAD Cluster of Excellence at the University of Cologne and the Helsinki Institute for Life Sciences at the University of Helsinki has now discovered that cells protect themselves from such stress by not only deforming the cell nuclei, but also softening the genetic material itself.

Protection of the genetic code within our DNA is critical for human health. Mutations in DNA lead to a large variety of diseases, such as developmental disorders or cancer. “Most of our tissues contain tissue-specific stem cells, which are long-lived cells whose function is critical for tissue function and maintenance. Due to their long lifetime, it is critical that the genome of these cells is efficiently protected from mutations to prevent diseases such as cancer”, says Michele Nava, the leading scientist of the study. “A lot is known about the role of chemicals and irradiation in inducing DNA damage, but how mechanical forces damage the DNA and what kind of mechanisms might exist to protect our cells from this damage has been unknown so far”, Nava explains.

To study how the DNA in stem cells respond to mechanical deformation, Nava, Miroshnikova, and colleagues used a special mechanical device to expose skin and muscle stem cells to similar mechanical stretch that they would experience inside the tissues. As a result of the stretch, both the nucleus and the DNA became re-organized, but also changed their mechanical properties and became softer. “It was exciting to realize that we could alter the mechanical properties of DNA simply by exerting mechanical forces on the stem cells. Even more striking was that if we experimentally prevented this change, the stem cells now acquired DNA damage, indicating that we had discovered an important protective mechanism”, says Yekaterina Miroshnikova, who led the study together with Nava and Wickström.

Going deeper into the cellular mechanism of the response of stem cells to stretch, Nava, Miroshnikova and colleagues found that if exposed to mechanical stretch for longer periods of time, the whole tissue oriented itself to the direction of force. This tissue-scale orientation prevented deformation of the nucleus and its DNA, allowing them to restore their original state. This tissue-level orientation thus served as long-term mechanoprotection.

Finally, the researchers also noticed that cancer cells were less sensitive to mechanical stretch than healthy stem cells, due to differences in the levels of key nuclear proteins. “It is interesting to note that two central features defining cancer are their genetic instability, i.e. frequent acquisition of new mutations, as well as their insensitivity to control by extrinsic signals. A major future goal of the laboratory is to understand how defects in this newly discovered pathway could promote cancer formation and how cancers might exploit the mechanics to escape the control mechanisms of the tissue”, says Sara Wickström.