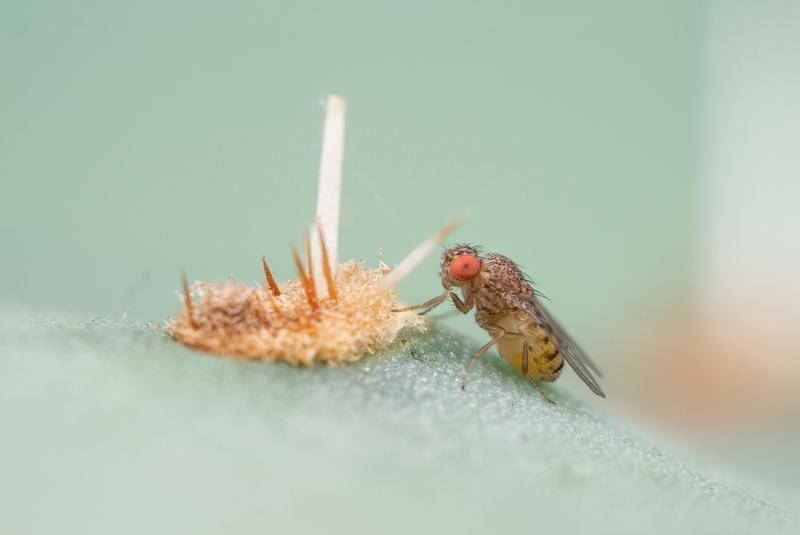 In a comprehensive ecological study, a team of scientists at the Max Planck Institute for Chemical Ecology in Jena examined three different species of the genus Drosophila and their interactions with their natural food resources, in particular the yeasts associated with these substrates. They found that vinegar flies do not necessarily prefer yeasts they know from their natural environments, but were also attracted by yeasts found in a foreign habitat. Their openness to associate with previously unknown yeasts could be a crucial factor for the emergence of new Drosophila species.

In a comprehensive ecological study, a team of scientists at the Max Planck Institute for Chemical Ecology in Jena examined three different species of the genus Drosophila and their interactions with their natural food resources, in particular the yeasts associated with these substrates. They found that vinegar flies do not necessarily prefer yeasts they know from their natural environments, but were also attracted by yeasts found in a foreign habitat. Female flies sometimes even decided to lay their eggs in presence of previously unknown yeast communities, although their offspring had less chance of survival there. Such processes in nature could be a key factor that leads to the flies populating new habitats and, provided that the larvae also survive there, the formation of niches and, ultimately, the evolution of new species (OIKOS, doi: 10.1111/oik.07180).

Everyone knows the common vinegar fly (Drosophila melanogaster), which - often not quite correctly called a "fruit fly" - is naturally found in swarms on fruit during the hot season, especially when bananas, apples, pears and other fruits are overripe and fermentation processes start. This is because the flies are attracted primarily by the odor of the yeasts involved in fermentation, rather than by the fruits themselves. Not only do the flies feed on these yeasts; the microorganisms also provide a first-class breeding substrate on which they lay their eggs and on which their larvae thrive. More than 1500 different species of the genus Drosophila are known. Many of the fly species are specialized for specific habitats; they feed, for example, exclusively on certain fruits and lay their eggs there.

Researchers at the Max Planck Institute for Chemical Ecology wanted to know more about the role of the yeasts that grow on the respective hosts play in the host selection of the flies, and whether a partnership or mutual dependency between flies and these yeasts had developed in the process of co-evolution. "We asked ourselves: Would the fly species remain faithful to their yeasts, or would they also be attracted towards other yeasts, and would that influence the reproductive success of their species?" Sarah Koerte, first author and doctoral researcher in the Department of Evolutionary Neuroethology, summarizes the initial question.

In addition to Drosophila melanogaster, the team took a closer look at two other species of the genus Drosophila, their host substrates and the associated yeasts: Drosophila mojavensis, a species first described in the Mojave Desert in the southwest of the USA, which thrives on cacti, especially necrotic cactus tissue, and Drosophila putrida, a species found in the Midwestern USA, which reproduces exclusively on fungi.

Female flies make decisions with negative consequences for their offspring

In behavioral experiments, the scientists tested the preferences of adult flies of all three species for yeasts, which grow either on fruit (the baker's or brewer’s yeast Saccharomyces cerevisiae), on cacti (Pichia cactophila) or on fungi (Vanrija humicola), and are thus part of the naturally associated microbial communities for each of the fly species. In addition, the influence of different yeast species on the egg laying behavior of mated female flies was observed.

Surprisingly, the flies did not necessarily prefer yeasts from their familiar habitat, but were also attracted towards the other yeasts. Females of the vinegar fly Drosophila melanogaster preferred to lay their eggs on a substrate with yeasts found on cacti, while female flies of the fungus specialist Drosophila putrida preferred fruit-specific yeasts for egg deposition. A real surprise was that female flies laid their eggs in the presence of yeasts which even had a negative effect on the development of their offspring, as experiments with Drosophila larvae on different brood substrates showed: Larvae of the Drosophila species that had specialized in cacti or fungi actually thrived best on yeasts associated with the familiar habitat, while yeasts from unknown environments tended to cause poor larval development and high mortality. In contrast to the two species with a limited host spectrum, Drosophila melanogaster larvae developed equally well on all tested yeasts, as this species is a generalist with a more flexible lifestyle.

The yeasts help the flies to decompose the plant or fungal substrate. The flies, on the other hand, excrete the yeasts undigested with their frass, and as a consequence the yeasts can spread further. The researchers suspected that the yeasts might be involved to different degrees in the decomposition of the respective substrates. Analyses of the sugar contents and the degradation rates showed that flies and yeasts together accelerated the decomposition. However, there was no evidence that the interaction of a specific fly species with its associated yeast was beneficial.

"Our results show that flies with a broad host spectrum were also more tolerant to different yeasts in food sources and at oviposition sites. Interestingly, the flies did not care much which yeasts were present when laying their eggs, while the hatching larvae were often only able to grow on the yeasts they would have encountered in nature," said Markus Knaden, head of the study. However, if larvae survive on a new host and the host-specific yeasts, this might enable the flies to adapt to new environments, which might lead to the evolution of new species.

“The evolutionary success of Drosophila might be linked to the ability to adapt rapidly to new habitats. Insect-associated microbial communities could be the evolutionary keys to unlock new doors and pathways towards conquering unknown environments and establishing new ecological niches,” says Sarah Koerte.