With an improved root system to higher drought tolerance in wheat 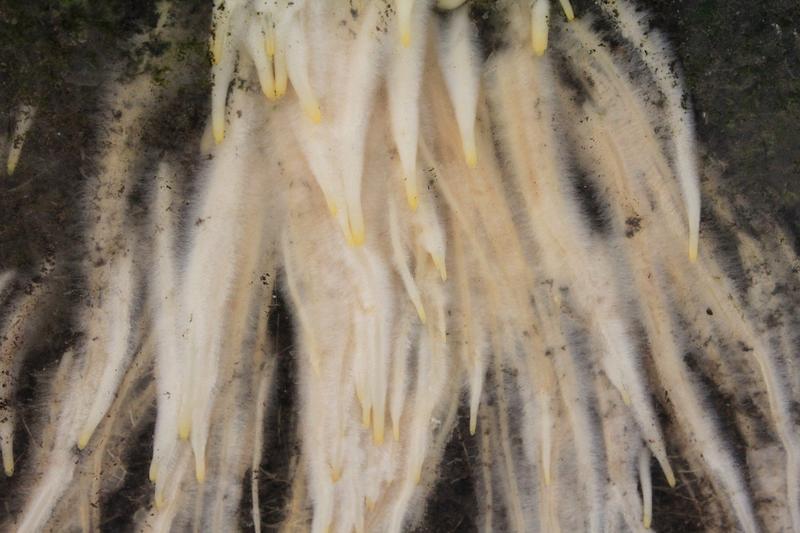 Launch of project: Research alliance borrows from a close relative to adapt Germany’s most important cereal grain to climate change. Joined press release of the Federal Office for Agriculture and Food, the Wheat Initiative and the Julius Kühn Institute

Groß Lüsewitz/Quedlinburg. Wheat is the most important small grain cereal worldwide. The precipitation in April 2020 was below the long-term average, following the trend of the past 11 years. This demonstrates that wheat cultivation in Germany is increasingly affected by drought. A research alliance, which includes three German plant breeding companies, the Bavarian State Research Center for Agriculture and the Julius Kühn Institute, JKI in short, aims to adapt wheat to the changing climate. The recently launched project TERTIUS is supported by the German Ministry of Food and Agriculture through the Federal Office for Agriculture and Food.
The water uptake through the roots is of central importance to improve drought tolerance. In this context, a close relative of wheat, cereal rye, serves more than just a model. “Long time ago rye initially occurred as weed in fields of wheat,” Dr. Bernd Hackauf from JKI says. “In such plant communities spontaneous hybridizations between closely related cereals happen under natural conditions,” says the research scientist working at the JKI location in Groß Lüsewitz. Because of that many modern wheat varieties worldwide carry segments inherited from rye in their genomes, which may encode for an improved root system.
This genetic information is of particular interest to the project TERTIUS. “This bond with rye can be identified in modern elite bread wheat and, thus, offers a great opportunity for a contemporary adaption of wheat to climate change. Observations from large scale performance trials under the drought in Germany in 2018 and 2019 reveal that this comparatively small segment of the rye genome is a key for increasing the drought tolerance of bread wheat,” Hackauf states.
However, the use of the desired genes is often compromised by other genes derived from rye, which have a negative impact on the processing quality of wheat. The aim of TERTIUS is to overcome this challenge by breaking up the linkage between desired and undesired traits. For this purpose, the scientists take advantage of a recent scientific breakthrough. The International Rye Genome Sequencing Consortium was able to comprehensively characterize the rye genome. According to Hackauf the genetic blueprints now available for rye and wheat will enable much faster and more precise improvement of important traits.
In the 2035 Arable Farming Strategy discussion paper of the BMEL, TERTIUS is the flagship project in the plant breeding area of action. “En route to the agriculture of the future, the tertiary gene pool of wheat, to which rye belongs, is a plant genetic resource that has been less comprehensively explored so far. Therefore, TERTIUS provides a valuable contribution to international wheat research activities aiming at the development of breeding strategies to achieve food security,” explains the President of the JKI, Prof. Dr. Frank Ordon. He points out, that TERTIUS is integrated into the global Alliance for Wheat Adaption to Heat and Drought under the roof of the Wheat Initiative and is completely in line with the Wheat Initiatives’ slogan “Together, we are creating future wheat!”.
Background
To meet the future demand for wheat, innovative approaches and global cooperation for the development of climate-adapted varieties are required. A funding announcement published in August 2018 for innovations to breed high-performance wheat varieties in the context of climate change complements an initiative launched in 2013 by the German Federal Ministry of Food and Agriculture to promote the intensive tackling of current and complex issues. The Federal Office for Agriculture and Food coordinates the research as part of the program to promote innovations. Based on a peer-review process, 11 out of 21 submitted pre-proposals were considered eligible. While first projects were launched in autumn 2019, the TERTIUS project started in April 2020.
Partners
• Bavarian State Research Center for Agriculture, Freising
• Deutsche Saatveredelung AG, Lippstadt
• Julius Kühn-Institut, Quedlinburg
• Saatzucht Streng-Engelen, Aspachhof
• Secobra Saatzucht, Moosburg

TERTIUS is financially supported by the German Federal Ministry of Food and Agriculture based on the decision of the Parliament of the Federal Republic of Germany through the Federal Office of Agriculture and Food. For further information see https://www.ble.de/EN/Home/home_node.html