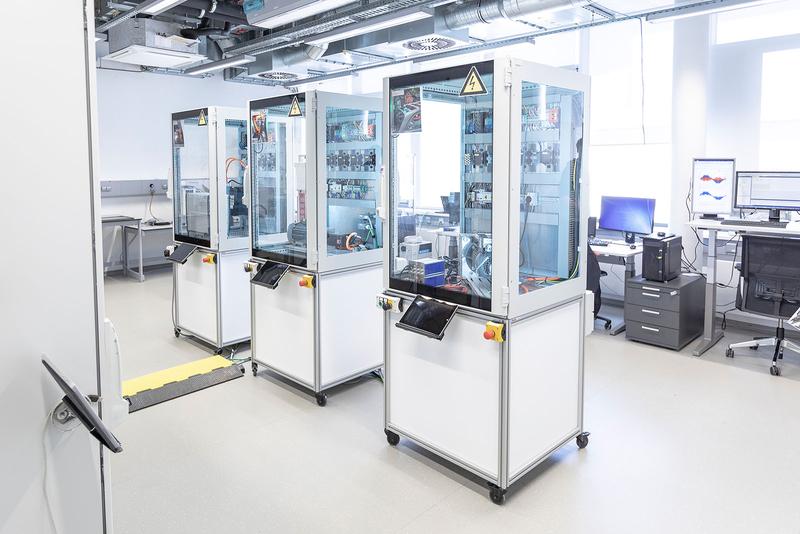 Most production plants today are still powered by alternating current. In the long term, however, research teams from the Fraunhofer Institutes for Manufacturing Engineering and Automation IPA and Integrated Systems and Device Technology IISB would like to see industrial manufacturing shift to operating with direct current. In the collaborative research project DC-INDUSTRIE 2, these teams have joined forces with more than 30 partners to develop new power supply systems for industry. The idea is to link all of a factory’s electrical systems to an intelligent DC grid (Direct Current) so as to make electrical supply more energy-efficient, stable and flexible.

Ever since the end of the 19th century, alternating current has been the standard means of power transmission and distribution. In Germany, for example, AC (Alternating Current) is what comes out of the power socket. As far as industry is concerned, however, Fraunhofer researchers would now like to change this: “There’s a lot of good reasons why industry should change from alternating to direct current,” says Timm Kuhlmann, research associate at Fraunhofer IPA in Stuttgart. Kuhlmann and his project partners would like to bring about a paradigm shift in industrial power supply and, in the long term, convert entire factory halls from AC to DC. “We’re already surrounded by DC devices,” he explains. “Computers, smartphones and LEDs all operate with DC and therefore need an adapter to convert AC power from the grid.” Yet on the supply front, the situation is also changing. Whereas conventional power plants, such as coal-fired and nuclear, produce alternating current, locally installed and renewable energy resources such as photovoltaic plants – or, for that matter, electrochemical energy storage systems – only ever supply direct current.

In the DC-INDUSTRIE 2 project, researchers from Fraunhofer IPA and Fraunhofer IISB have teamed up with over 30 partners to develop and trial a concept for an intelligent, economic and efficient DC supply system for a production hall. The project is being funded by the German Federal Ministry for Economic Affairs and Energy (BMWi) and is scheduled to run until the end of 2022.

The forerunner project, DC-INDUSTRIE, already gave reasons for optimism. Here, the partners were able to demonstrate the feasibility of local power flow control for a DC supply grid in a factory. Moreover, the shift from AC to DC voltage was shown to boost efficiency by between 5 and 10 percent – largely because with a DC network it is much easier to make use of regenerative braking, recuperation energy from variable-speed drives. In all, four test systems equipped with DC components from various manufacturers underwent trials. Now that this concept has been shown to work for a group of machinery, the task is to implement it for an entire production hall. “In the follow-up project, DC-INDUSTRIE 2, we hope to increase energy efficiency even further and to cut CO2 emissions,” Kuhlmann explains. “At the same time, we want to make the system more flexible so that it can accommodate an increasing use of climate-neutral technology. Having a local DC grid in the factory makes it easier to balance out any fluctuations in power supply resulting from weather-related variations in the amount of electricity generated by renewable energy sources and therefore increasingly common grid fluctuations.”

Moreover, most of the drives in production machinery are variable-speed motors. These are all equipped with frequency converters, which run on direct current. Therefore, in order to supply an electric motor with a variable voltage and frequency, the AC supply voltage must first be rectified. By directly supplying the frequency converter with direct current, this conversion step is eliminated, thereby avoiding energy conversion losses and also facilitating simple recuperation of braking energy. Similarly, the rectification process subjects the AC network to a high harmonic load, which in turn necessitates the use of elaborate and costly filtering measures in order to ensure normative voltage quality. With a DC network, such measures are no longer required.

A further advantage here is that the load distribution between energy storage systems, grid feed and renewable sources of energy is managed locally on the basis of grid voltage as an indicator. “The big benefit of using direct current in production is that you can connect up all the factory’s electrical systems to one DC smart grid,” says Kuhlmann. “This means you can improve the quality and availability of the power supply in your very own factory and thereby increase the reliability of production.” In the DC-INDUSTRIE 2 project, Kuhlmann and his team are responsible for the analysis of company requirements, the conversion process and network management. Fellow researchers at Fraunhofer IISB are responsible for the equipment required for the conversion to DC. This includes supplying DC converters and protective equipment, inspecting the network for small-signal/large-signal stability, and local management of interconnected transformer systems. “We’re establishing microgrid topologies – i.e., control clusters – which enable us to balance and coordinate energy storage, generation and consumption on the local factory level,” says Kuhlmann. “These can also be operated automatically.”

The new grid structure has one or a number of interfaces to the AC distribution grid. This provides production machinery with direct voltage via active or passive rectifiers. Every item of electrical equipment – e.g., variable-frequency drives, lighting, and process technology – is directly supplied with direct current and connected to a shared direct-voltage grid operating within a voltage band of ±10 percent of a nominal rating of 650 volts. This enables a direct energy swap between the various drives that serve, for example, to accelerate or decelerate robots and machine tool spindles. Components such as brake resistors, which burn up surplus energy, are no longer required. It is the further development of power semiconductor devices that has enabled the creation of these new grid structures. This is because the availability of these new power devices has substantially reduced the high cost otherwise required to cover DC switching components. “We also achieve energy savings of between 5 and 10 percent simply by using direct current,” Kuhlmann explains.

Further trials are already underway in test halls and at Factory 56, a production facility operated by project partner Daimler in Sindelfingen, Stuttgart. The Daimler plant is equipped with active infeed converters – active bidirectional rectifiers – that are connected directly to the grid and supply some items of plant machinery with direct current. “Bidirectional means you can also supply the external AC grid with power, as a service, whenever you have excess generating capacity, so it’s not a one-way street,” says Kuhlmann. “And this in turn means that normal consumers also benefit from the transition to a new energy economy in the field of Industrie 4.0.”