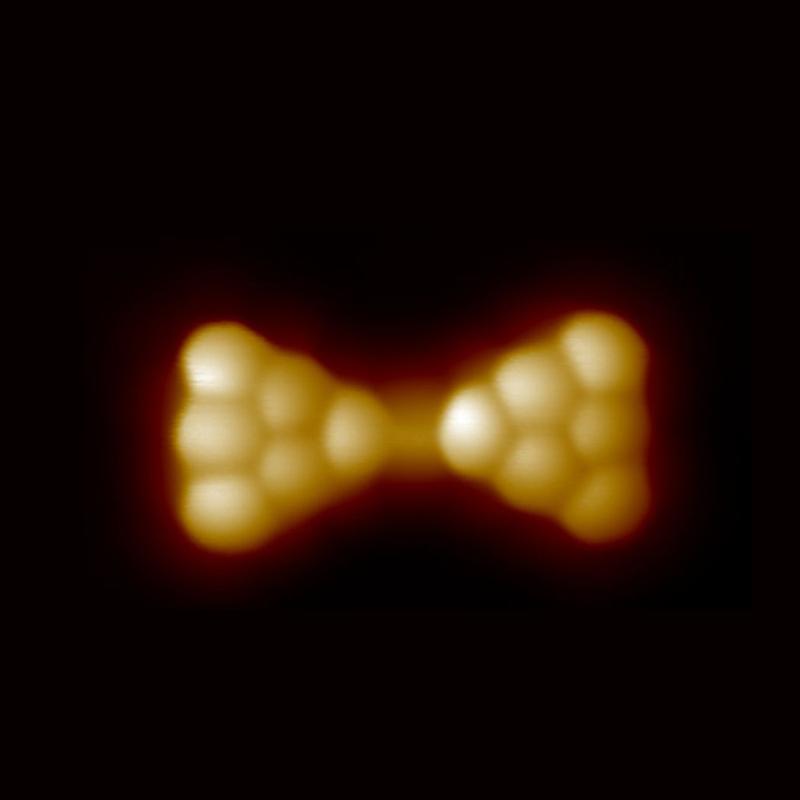 Graphene triangles with an edge length of only a few atoms behave like peculiar quantum magnets. When two of these nano-triangles are joined, a "quantum entanglement" of their magnetic moments takes place: the structure becomes antiferromagnetic. This could be a breakthrough for future magnetic materials, and another step towards spintronics. An international group led by Empa researchers recently published the results in the journal "Angewandte Chemie".

The "miracle material" graphene - a two-dimensional honeycomb structure made of carbon atoms with a thickness of only one atom - has numerous outstanding properties. These include enormous mechanical resistance and extraordinary electronic and optical properties. Last year a team led by the Empa researcher Roman Fasel was able to show that it can even be magnetic: they succeeded in synthesizing a molecule in the shape of a bowtie, which has special magnetic properties.

Now another breakthrough has been made in this direction. Theoretical work from 2007 predicted that graphene could exhibit magnetic behaviour if it were cut into tiny triangles. Over the last three years, several teams, including the Empa team, have succeeded in producing the so-called triangulenes, consisting of only a few dozen carbon atoms, by chemical synthesis under ultra-high vacuum.

On the track of magnetism with the scanning tunneling microscope

However, their magnetism had remained undiscovered until now. First, the presence of unpaired spins, which make triangulenes magnetic in the first place, also make them extremely reactive. Secondly, even with stable molecules, it is extremely difficult to prove the magnetism of such a tiny piece of matter. But now an international group of scientists from Empa, the Technical University of Dresden, the University of Alicante and the International Iberian Nanotechnology Laboratory in Portugal has succeeded in doing just that.

The breakthrough was made possible by a powerful tool for investigating matter at the atomic level - the scanning tunneling microscope (STM). The STM makes it possible to conduct electrical currents through individual atoms or nanostructures deposited on a conductive substrate. So far, however, individual triangulenes had only provided indirect evidence of their magnetic nature.

Now, however, the researchers have examined molecules in which two triangulenes are joined by a single carbon-carbon bond (so-called triangulene dimers). These structures provided direct evidence of the magnetic nature of triangulenes. This is because theory says the following: if two triangulenes are joined, not only is their magnetism preserved; their magnetic moments should also form a "quantum entangled" state. This means that the spins - the tiny magnetic moments - of their unpaired electrons should point in opposite directions. This state is known as the antiferromagnetic (or spin-0) state.

In addition, the theory also predicted that it should be possible to excite the triangulene dimers to a state in which their spins are no longer perfectly aligned (spin-1 state). The energy required to cause this excitation, the so-called exchange energy, reflects the strength with which the spins of the two triangulenes in the dimers are bound in the antiferromagnetic state. And indeed in their experiments, the researchers found that the triangulene dimer can be excited to the spin 1 state by injecting electrons with an energy of 14 meV.

These results are relevant not only because they provide direct evidence for the long-awaited magnetism in triangulenes, but also because they show how these remarkable nanosystems can be combined to form larger structures with quantum entangled magnetic states. In the future, such new (and purely organic) magnetic materials could not only be used in technologies such as spin-based information processing, which promise faster computers with lower power consumption, or in quantum technologies; but they could also provide fertile ground for the study of exotic physical phenomena.