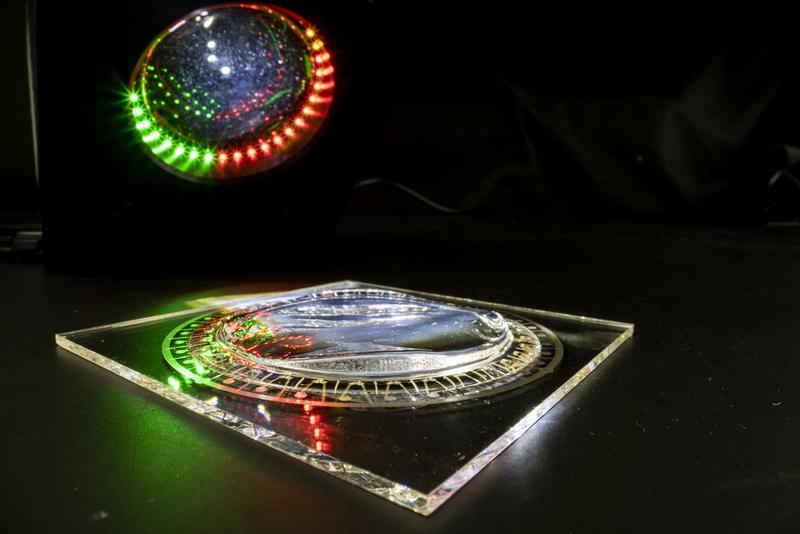 How can mass production methods be applied to individualized products? One answer is to use a combination of digital manufacturing technologies, for example by integrating digital printing and laser processing into traditional manufacturing processes. This paves the way for in-line product customization. Six Fraunhofer institutes have pooled their expertise to take the new process to the next level.

“Right now, individualization in the automotive industry basically means preparing every vehicle for every possible version and then adding the specific features each customer has ordered at the end of the line. This means, for example, that every car has to be fitted with the entire wiring harness,” says project manager Professor Thomas Otto. Professor Reinhard Baumann, who works at Fraunhofer ENAS and is in charge of coordinating the Lighthouse Project, explains the new concept: “By combining traditional manufacturing methods with emerging digital technologies and production processes, we have found a way to integrate product individualization within mass production environments. Our emphasis right from the start has been on product and production reliability – but we still have a long way to go.”

Printing on two- and three-dimensional component surfaces of any shape

The basic concept is simple: Just like an inkjet printer in the office, the researchers use inkjet and dispensing technologies to print geometric patterns. But instead of using colored inks – in other words, inks that have the functionality of "color" – they use inks with functionalities such as electrical conductivity, semiconductivity and insulation. This technology can be used to create both single-layer and multilayer systems. Even sensors and transistors are feasible. “And I can do all this not only on smooth, level surfaces such as a sheet of paper but also, using robots, on three-dimensional curved workpieces such as deep-drawn car doors,” says Baumann. The second digital manufacturing technology that comes into play is the laser. Researchers at the six Fraunhofer Institutes have combined the two methods. As a result, the laser beam follows exactly the line taken by the printer, allowing it, for example, to cure previously printed photopolymers or sinter nanoparticle inks. Numerous robots are already used for assembly purposes on the shop floor, yet the new method is very different. “We have achieved orders-of-magnitude improvements in the spatial resolution of the printing with line widths down to approximately 50 micrometers,” says Baumann.

From automotive and aviation to optics

To demonstrate the universal applicability of their approach, the Fraunhofer scientists have already completed three demonstrators for the key future markets of automotive engineering, aviation and optics. The use of digital manufacturing technologies opens the door to producing small batches of individualized mass products. Cars, for example, typically contain up to eight kilometers of copper wiring, weighing the equivalent of around 160 kilograms. Experts can use digital printing to print signal-carrying conductor paths on body parts such as doors, thereby replacing some of the heavy copper wires with printed conductor tracks. This makes vehicles lighter and reduces fuel consumption.

In aircrafts, the team of researchers is focusing on sensors that are currently glued or screwed on. “We’re taking the kind of proven fiber composite material technologies used in lightweight construction and then incorporate digital production processes,” says Baumann. Using this method, the researchers digitally print both individual conductor paths and entire sensor systems on glass fiber or carbon mats. They are then impregnated with a synthetic resin which integrates them directly into the lightweight component. In an initial step, the scientists succeeded in using this method to incorporate temperature, capacitive and impact sensors in the wing elements of a commercial aircraft as well as UHF antennas and LEDs.

Optical components such as headlight lenses for cars are generally made from polished glass or plastic. The new technologies developed in the Go Beyond 4.0 Lighthouse Project open up the additional option of manufacturing free-formed optics that combine properties of three lenses within a single element instead of just the properties of a single lens. These free-form optics can also incorporate light emitting diodes, and thus signal functions. “This enables us to produce complex optical elements that would previously have been unthinkable,” says Baumann. The primary focus is on potential new applications. Free-form optics could project information generated by the vehicle onto the road without requiring any kind of screen – for example projecting a stop sign before the real stop sign is even visible. The vehicle could pull the required information from the internet or from the network environment.

One of the technology’s biggest advantage is that it can be used to process workpieces “in-line” in the manufacturing environment. Instead of the currently used system of removing products from the production line for individualization and then feeding them back in afterwards they can simply remain in the production line from start to finish. This is already feasible on a laboratory scale, and the researcher teams are now seeking to attain the cycle times of real-world production lines. At the same time, they are continuing to optimize the technologies themselves and improve how they work in combination. “This Lighthouse Project has brought together an extraordinarily high-performance team of people who really know how to cooperate efficiently,” says Baumann. “The results we’ve achieved so far are enabling us to address additional markets and work on them together,” says Otto.