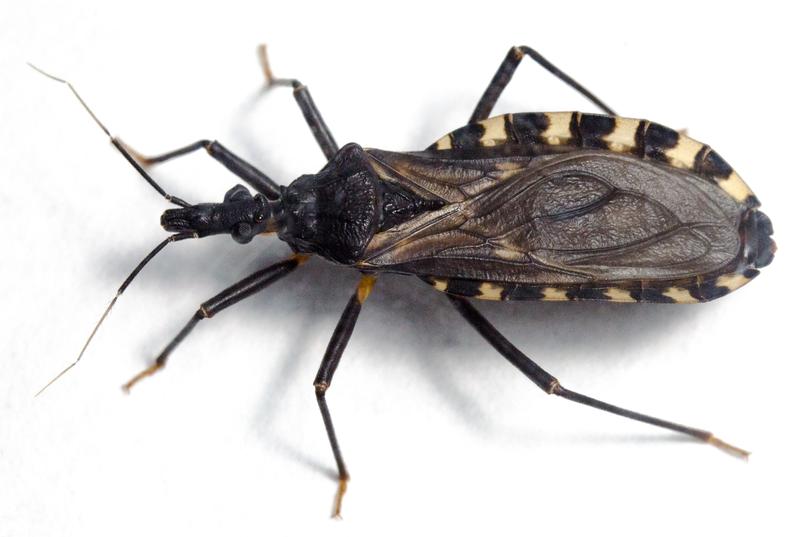 An infection with Chagas disease is only possible in Latin America since the insect species that spread the disease only occur there. Scientists at Goethe University and the Senckenberg Society for Natural Research have now used ecological niche models to calculate the extent to which habitats outside of the Americas may also be suitable for the bugs. The result: climatically suitable conditions can be found in southern Europe for two kissing bug species; along the coasts of Africa and Southeast Asia the conditions are suitable for yet another species. The Frankfurt scientists therefore call for careful monitoring of the current distribution of triatomine bugs. (eLife DOI: 10.7554/eLife.52072)

The acute phase of the tropical Chagas disease (American Trypanosomiasis) is usually symptom-free: only in every third case does the infecting parasite (Trypanosoma cruzi) cause any symptoms at all, and these are often unspecific, such as fever, hives and swollen lymph glands. But the parasites remain in the body, and many years later chronic Chagas disease can become life-threatening with pathological enlargement of the heart and progressive paralysis of the gastrointestinal tract. There is no vaccine for Chagas disease. The WHO estimates that 6 to 7 million people are infected worldwide, with the majority living in Latin America (about 4.6 million), followed by the USA with more than 300,000 and Europe with approximately 80,000 infected people.

Chagas parasites are transmitted by predatory blood-sucking bugs that ingest the pathogen along with the blood. After a development period in the intestinal tract of the bugs, the parasites are shed in the bug’s faeces. The highly infectious faeces are unintentionally rubbed into the wound by the extreme itching caused by the bug bite. Oral transmission by eating food contaminated with triatomine bug faeces is also possible.

Researchers led by the Frankfurt parasitologists and infection biologists Fanny Eberhard and Professor Sven Klimpel have used niche models to investigate which climatic conditions in the world are suitable for Latin American kissing bugs. In particular, temperature and precipitation patterns were incorporated into the calculations on the climatic suitability of a region. The researchers were able to show that currently in addition to Latin America, Central Africa and Southeast Asia also have suitable habitats for triatomines. Two of the triatomine species, Triatoma sordida and Triatoma infestans, are now finding suitable habitats in temperate regions of southern Europe such as Portugal, Spain, France and Italy. Both triatomine species frequently transmit the dangerous parasites in Latin America and can be found inside or near houses and stables, where they get their nightly blood meals preferably from dogs, chickens and humans.

Another triatomine species, Triatoma rubrofasciata, has already been detected outside Latin America. The model calculations by the Frankfurt scientists identify suitable habitats along large areas of the African and Southeast Asian coasts.

Professor Sven Kimpel explains: “There are people living in Europe who were infected with Chagas in Latin America and are unknowingly carriers of Trypanosoma cruzi. However, the parasite can currently only be transmitted to other people through untested blood preservations or by a mother to her unborn child. Otherwise, Trypanosoma cruzi requires triatomine bugs as intermediate hosts. And these bugs are increasingly finding suitable climatic conditions outside Latin America. Based on our data, monitoring programmes on the distribution and spreading of triatomine bugs would therefore be feasible. Mandatory reporting of Chagas disease cases could also be helpful.”

Current news about science, teaching, and society can be found on GOETHE-UNI online (www.aktuelles.uni-frankfurt.de)

Goethe University is a research-oriented university in the European financial centre Frankfurt am Main. The university was founded in 1914 through private funding, primarily from Jewish sponsors, and has since produced pioneering achievements in the areas of social sciences, sociology and economics, medicine, quantum physics, brain research, and labour law. It gained a unique level of autonomy on 1 January 2008 by returning to its historic roots as a "foundation university". Today, it is one of the three largest universities in Germany. Together with the Technical University of Darmstadt and the University of Mainz, it is a partner in the inter-state strategic Rhine-Main University Alliance. Internet: www.goethe-universitaet.de