Four newborn exoplanets get cooked by their sun 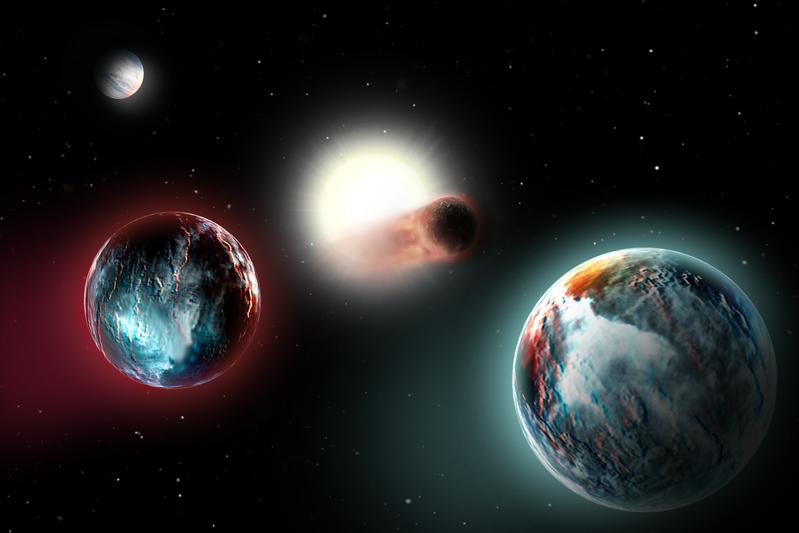 Scientists from the Leibniz Institute for Astrophysics Potsdam (AIP) examined the fate of the young star V1298 Tau and its four orbiting exoplanets. The results show that these recently born planets are roasted by the intense X-ray radiation of their young sun, which leads to the vaporisation of the gaseous envelope of these planets. The innermost planets could be evaporated down to their rocky cores, so that there is no atmosphere left.

Young exoplanets live in a high-stakes environment: their sun produces a large amount of energetic X-ray radiation, typically one thousand to ten thousand times more than our own Sun. This X-ray radiation can heat the atmospheres of exoplanets and sometimes even boil them away. How much of an exoplanet's atmosphere evaporates over time depends on the properties of the planet – its mass, density, and how close it is to its sun. But how much can the star influence what happens over billions of years? This is a question that astronomers at the AIP chose to tackle in their newest paper.

The recently discovered four-planet system around the young sun V1298 Tau is a perfect test bed for this question. The central star is about the same size as our Sun. However, it is only about 25 million years old, which is much younger than our Sun with its 4.6 billion years. It hosts two smaller planets – roughly Neptune-sized – close to the star, plus two Saturn-sized planets farther out. “We observed the X-ray spectrum of the star with the Chandra space telescope to get an idea how strongly the planetary atmospheres are irradiated,” explains Katja Poppenhäger, the lead author of the study. The scientists determined the possible fates of the four exoplanets. As the star-planet system grows older, the rotation of the star slows down. The rotation is the driver for the star’s magnetism and X-ray emission, so slower rotation goes hand in hand with weaker X-ray emission. “The evaporation of the exoplanets depends on whether the star spins down quickly or slowly over the next billion years – the faster the spin-down, the less atmosphere is lost,” says PhD student and co-author Laura Ketzer, who developed a publicly available code to calculate how the planets evolve over time.

The calculations show that the two innermost planets of the system may lose their gas atmospheres completely and become rocky cores if the star spins down slowly, while the outermost planet will continue to be a gas giant. “For the third planet, it really depends on how heavy it is, which we don't know yet. Measuring the size of exoplanets with the transit technique works well, but determining planetary masses is much more challenging,” explains co-author Matthias Mallonn, who has updated the transit properties of the system using observations with AIP's ground-based STELLA telescope.

“X-ray observations of stars with planets are a key puzzle piece for us to learn about the long-term evolution of exoplanetary atmospheres,” concludes Katja Poppenhäger. “I am particularly excited about the possibilities we get through X-ray observations with eROSITA over the next few years.” The eROSITA X-ray telescope, which has been developed in part by the AIP, is conducting observations of the whole sky and will yield X-ray properties for hundreds of exoplanet host stars.