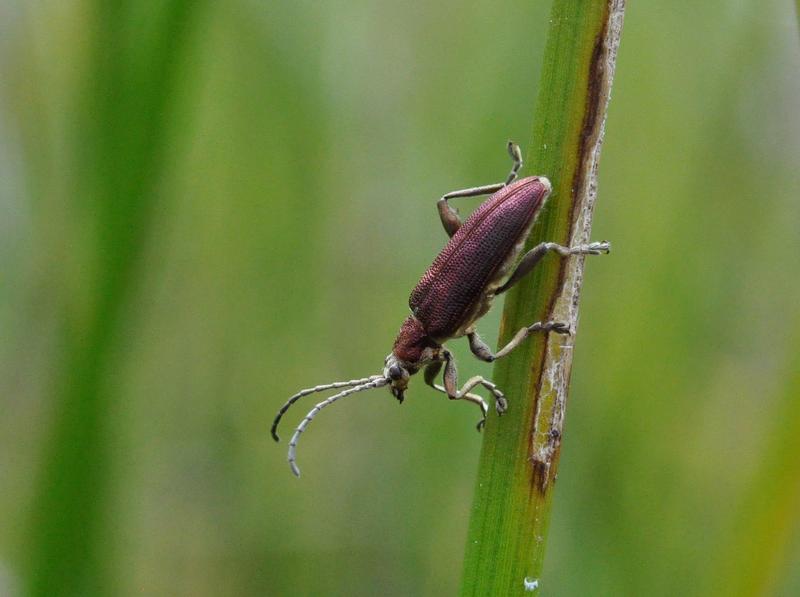 Insects that feed only on plants have a number of challenges to overcome. But they also have some active helpers to assist them with the supply of important nutrients. So-called symbiotic microorganisms make essential amino acids, vitamins, and enzymes available and in this way supplement and enrich the limited diet of their host insects. Reed beetles with their semi-aquatic lifestyle also have such helpers that extend their range of available nutrients. Scientists at Johannes Gutenberg University Mainz (JGU) in collaboration with researchers at the Max Planck Institute for Chemical Ecology in Jena and partners in Hamburg and Japan have investigated the contributions that the symbiotic bacteria make to the unusual life cycle and diet of reed beetles. "Thanks to their symbiotic bacteria, reed beetles have been able to access new ecological niches. Although this means that the symbionts promote the ecological potential of their hosts, what is even more interesting is the fact that they can also restrict their adaptability," explained Professor Martin Kaltenpoth, head of the Department of Evolutionary Ecology at JGU.

Reed beetles are an ecologically unusual subgroup of the leaf beetle family and consist of around 165 species that live all or part of the time in water. The larvae of these reed beetles are aquatic and attach themselves to underwater plant roots from which they suck the sap as food. The adult beetles of most species live in vegetation above the water level and eat the leaves of plants such as grasses, sedges, and water lilies. In contrast with many other leaf beetles, the food sources of the larvae and the adult insects of the same species differ considerably. "The aquatic life stage of the larvae is highly unusual," stated Kaltenpoth, pointing out that the larvae even produce a cocoon under water, from which the mature beetles hatch. Since the early 1930s it has been known that reed beetles live in close symbiosis with bacteria that colonize blind sacs in the midgut of the larvae, but in the adult beetles they occupy the so-called Malpighian tubules, which are comparable to our kidneys. Scientists were also aware that without these symbionts the larvae would not be able to form a cocoon. However, how exactly the symbiotic bacteria contribute to the sustenance of their hosts has, as yet, remained a mystery.

Using high-throughput sequencing techniques, the team led by Kaltenpoth sequenced the genetic material of the symbionts of 26 species of reed beetles from North America, Asia, and Europe. They reconstructed the entire genomes of the symbionts and were able to make predictions as to what these microbes actually do for their beetle hosts. It turns out that the bacteria can produce almost all of the essential amino acids, that is the ten protein components vital to life that the beetles cannot synthesize themselves. This is likely important for the larvae in particular, because the plant sap from roots does not supply sufficient amounts of amino acids – and most importantly, not enough to build the protein-rich cocoon. "We know this form of cooperation in which most or all of the essential amino acids are supplied from many plant sap-feeding Hemiptera, for example aphids and cicadas, but this is uncommon in beetles," said the evolutionary biologist.

Some of the symbionts help adult beetles to break down pectins

A second aspect of the coexistence of adult reed beetles and bacteria is even more interesting. Some of the symbionts provide one or two enzymes that can break down pectins. Pectins are present in the cell walls of plants and are difficult to digest. They can be broken down by pectinases in order to contribute to the carbohydrate and energy supply of the herbivorous insects.

The research team drew up a phylogenetic tree of the symbiotic bacteria to trace their evolutionary history. Interestingly, over the course of their evolution, the pectinases have disappeared from the symbiont genomes in four independent beetle lineages. Beetles that do not obtain pectinases through their symbiont are specialized to live on grasses and sedges, plants with low amounts of pectin. "These beetles have changed their food plant preferences. And because grasses and sedges only have small amounts of pectin in the cell wall, the pectinases provided by the symbionts were no longer useful and got subsequently lost," said Kaltenpoth. Beetles that continue to feed on water lilies, grass rush, or pondweed still have at least one pectinase.

Microbial symbiosis can extend as well as restrict ecological niches

The results reveal that, on the one hand, symbionts can broaden the ecological potential of their host and enable it to adapt to a new niche. However, they also show that symbiotic microbes can restrict the selection of host plants if their enzymatic abilities are lost. "We think that the species of reed beetle that live on grasses and sedges can no longer return to consuming pectin-rich host plants," concluded Kaltenpoth.

Reed beetles are among the few groups of beetles that have changed from a terrestrial to an aquatic life cycle. Symbiotic microorganisms have made a significant contribution to this move from land to water by supporting the nutrient supply of the larvae and adult beetles. However, as certain types of reed beetles no longer have pectinases available, they are also responsible for limiting the ecological environment their host can occupy.

Professor Martin Kaltenpoth's research on the microbial ecology of reed beetles is being supported by an ERC Consolidator Grant, which he was awarded in 2018 to investigate aspects of symbiosis between beetles and bacteria. The biologist has been Professor of Evolutionary Ecology at Johannes Gutenberg University Mainz since 2015. He has recently been appointed new director of the Max Planck Institute for Chemical Ecology in Jena, where he will be setting up the new Department of Insect Ecology and Evolution from February 2021.