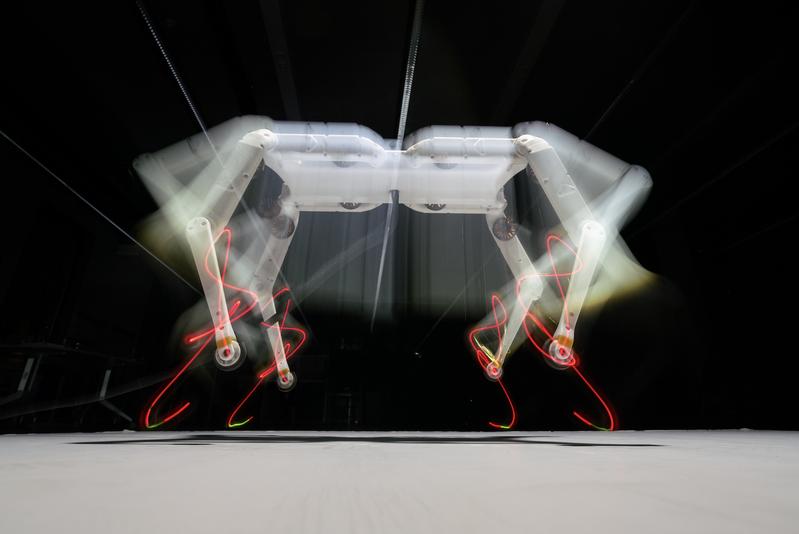 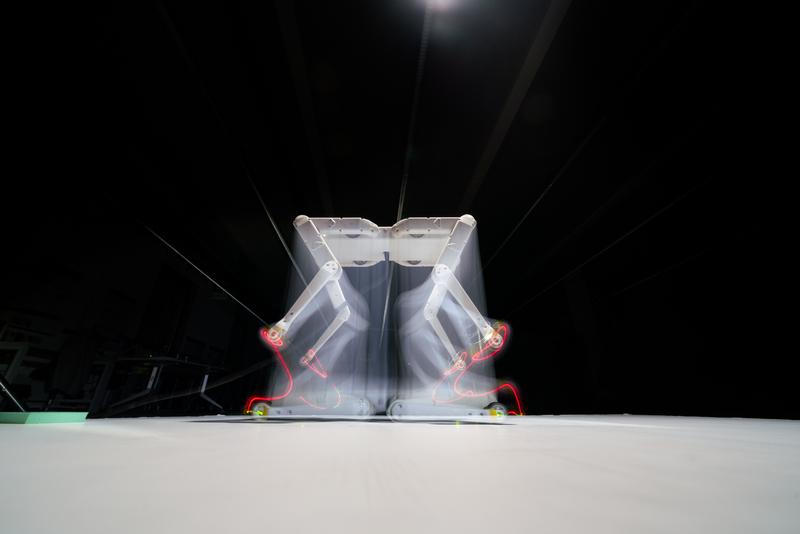 Solo 8 is a new research robot, developed as an open-source project in the German cities of Tübingen and Stuttgart. The dog-resembling, torque-controlled quadruped is capable of very dynamic movements. It is made entirely of 3D printed parts and off-the-shelf components, which makes it an easy to replicate platform ideal for fundamental research in legged locomotion and robotic education. The project aims to provide robotic research labs around the world with an easy-to-assemble legged robot kit that doesn’t break the bank.

Tübingen/Stuttgart/New York – In collaboration with roboticists in New York, scientists at the Max Planck Institute for Intelligent Systems (MPI-IS) in Germany developed an agile, four-legged robot that is among the most convenient, easy to use and dynamic research platforms in the world. The main idea behind the project is to make its technology available to any robotic research lab. Roboticists around the globe can exchange algorithms and compare methods on similar platforms, gaining insights from other teams’ experiments who use the identical robot hardware. In robotics, comparative data is a critical step towards rapid progress.

Resembling an over-excited dog waiting to be walked, the light-weight and torque- controlled quadruped robot is state of the art. It already can do remarkably dynamic tricks, such as jumping waist high or toppling over and coming back onto its feet. The multi- disciplined research team behind the project prioritized the robot's dynamic capabilities but also its low cost and easy replication. The team envisions an accessible and affordable locomotion platform for research and teaching. Most parts of Solo 8 are 3D-printed, and the few remaining ones are purchasable off-the-shelf. The construction files and the GitHub documentation are published open-source under the BSD 3-clause license. And the open- access allows the project to grow and enable other scientists to leverage the modular set-up when prototyping and developing their own technology.

Step by step, the four-legged robot is jumping into action

Already a few universities have approached the team. “Our robot platform is a great base to quickly prototype and build high-performance hardware,” says Ludovic Righetti, who is an Associate Professor at the Tandon School of Engineering at New York University and a research group leader at the MPI-IS. “In return we benefit, because other researchers can contribute to the project, for example colleagues at the LAAS-CNRS in France have developed an electronic board to help communicate with the robot over WiFi. Also complex control and learning algorithms can be rapidly tested on the platform, decreasing the time from idea to experimental validation. It greatly simplifies our research and our open-source approach allows us to compare algorithms with other laboratories, allowing us to better compare their performance. In my lab here in New York, our most advanced algorithm was tested on Solo. It would have been much more difficult on a different platform. That was a big deal for us.”

No need to reinvent the wheel

“For a research group to develop such a robot themselves, it takes easily four years of work,” says Alexander Badri-Spröwitz, leader of the Dynamic Locomotion research group at the MPI-IS. “Additionally, you need a wide range of expertise. Our platform is the combined knowledge of several teams. Now any robotics lab worldwide can go online, download the files and print the parts, and buy the remaining components from the catalog. Roboticists can add extra features within a few extra weeks. Done – you’ve got yourself a world-class robot.” Home-made and easy to tweak to meet one’s individual research goal: all this without breaking a lab’s bank. Solo costs much less than what a store-bought legged robot would set you back.

The Open Dynamic Robot Initiative was kick-started in 2016 by Felix Grimminger, Ludovic Righetti, and Alexander Badri-Spröwitz and their teams. The project was originally funded by Righetti's ERC Starting Grant and then by several MPI-IS' grassroot projects and a US National Science Foundation grant. Over the years, more scientists joined, combining expertise in mechanical engineering, mechatronics, electrical engineering, and computer science. In 2018, robot Solo 8 first roamed the research labs in Tübingen and Stuttgart. In May 2020, the publication “An Open Torque-Controlled Modular Robot Architecture for Legged Locomotion Research” was accepted to the Robotics and Automation Letters. The research will also be presented at ICRA, the International Conference on Robotics and Automation, one of the world’s leading robotic conferences. This year, ICRA is held virtually, starting at the end of May.

“Solo has some novel capabilities that we are interested to explore in the future,” says Felix Grimminger, a Mechatronics Engineer at the MPI-IS. The concept for Solo was his idea, the constant optimization his incentive. “It has an extensive range of motion. When the robot falls on its back, it can configure the legs the other way and just stand up. Or it can jump up to reach 65 centimeters from a standing height of 24 cm.”

The robot achieves a spring-like behavior, i.e., its legs act as a rebounding structure. The torque-controlled motors perform like the muscles in animal legs or the elasticity in the tendons. "Note that the robot uses virtual springs, they are not mechanical springs. And as virtual springs, they can be programmed. You can, for instance, adjust the spring stiffness from soft to hard. A variable stiffness is what we see in animals and humans and Solo is just as able to adjust its stiffness as they can. This way, the robot achieves adaptive and robust locomotion behavior. With all the exciting results visible in the videos," Badri-Spröwitz adds.

Building a Zoo of robots

Another main feature is the lightweight design of just over 2 kg, providing a very high power to weight ratio. Most quadrupeds are significantly heavier and therefore harder to handle in a research environment. With a low weight, it now becomes easy for students to work with the robot, and it is safer. “If they want to, they can put Solo 8 in a backpack and take it home or to a conference,” Badri-Spröwitz says.

The researchers also put a lot of effort into optimizing and testing Solo’s core actuator module. “It was important to get this right. The core actuator is like the basic building block that we reuse with little variations over and over again,” Grimminger adds. “That way we can build a zoo of robots.”

The robot carries the number eight in its name, doing justice to its eight actuated joints: each robot leg can change the angles in its hip and knee. A new robot version was recently finished and first tests conducted with more degrees of freedom: a total of twelve, three per leg. The Solo 12 can now also step sideways. “That means Solo 12 – because of its additional degrees of freedom – will be even more versatile and able to display more complex behaviors,” Grimminger concludes.