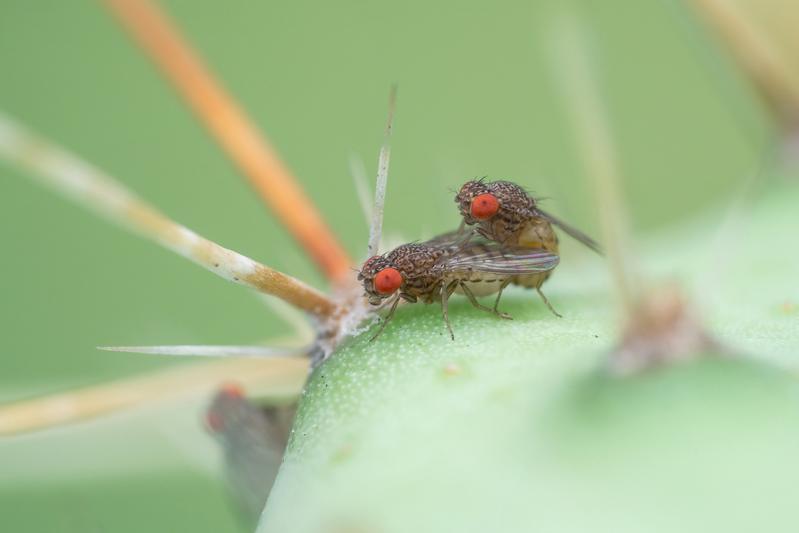 A male sex pheromone no longer produced represents a decisive mechanism for the evolution of new species.

When choosing a mate, females of different subspecies of Drosophila mojavensis recognize the right mating partners either mainly by their song or by their smell. This was discovered by researchers at the Max Planck Institute for Chemical Ecology and their international collaboration partners, as a new study reports. A specific male sex pheromone is only produced by males from two of the four subspecies, and is crucial for the mate choice of the corresponding females. Females from the subspecies in which the males no longer produce this pheromone are also able to perceive the chemical messenger, but for them the specific mating song is more important for the choice of the right males than their smell. New species apparently evolve when the chemical mating signal is altered and when, in turn, the signal is reinterpreted by the opposite sex in the context of other signals, such as the courtship song. (Science Advances, doi: 10.1126/sciadv.aba5279, June 2020).

Four subspecies of the desert dwelling fly Drosophila mojavensis are known in the USA and Mexico. They only evolved about 250.000 years ago, which is a relatively short period from an evolutionary perspective. An investigation of these subspecies is therefore an opportunity for scientists to follow evolutionary events and the incipient speciation "live". The four subspecies are found in geographically isolated regions. While the two northern subspecies specialized on the fruits of cactus species in the Mojave Desert or on the Californian island of Santa Catalina, the two southern subspecies use cacti in the Sonora Desert and in the Mexican part of California as their food and breeding substrate (see also our press release published on May 4, 2020: Foraging Drosophila flies are open for new microbial partners - http://www.ice.mpg.de/ext/index.php?id=1628&L=0).

Of particular interest is the different mating behavior of the four Drosophila mojavensis subspecies. In their natural environment, males usually choose a site close to their brood substrate and attract females to this location. By conducting chemical analyses and neurobiological experiments, the research team was able to identify the chemical signals involved in courtship and mating and understand their function.

The loss of a pheromone can be an isolating mechanism

All four subspecies of Drosophila mojavensis use in addition another sex pheromone as a mating signal. The researchers were able to show that this chemical compound is not perceived as an olfactory signal, but rather via gustatory cells on the foreleg of the flies. Interestingly, this pheromone, which is transferred from a male to a female during mating, acts like an anti-aphrodisiac on other males and prevents mated females from mating again before laying their eggs. By transmitting this pheromone during mating, a male can thus ensure his paternity.

In addition to chemical analyses and behavioral experiments, the scientists investigated which areas of the fly brain respond to the pheromones during mating. "The CRISPR-Cas9 technology allowed us to identify and even silence the olfactory channels that underlie the sexual behaviors in Drosophila mojavensis. This enabled us to solve the longstanding mystery of the isolation barriers responsible for the evolution of the four Drosophila mojavensis subspecies," says Mohammed Khallaf, the study's lead author.

The researchers observed that an activation of the olfactory receptor Or65a induces female receptivity in a subspecies of D. mojavensis. Interestingly, the same receptor also exists in the well-studied model species Drosophila melanogaster, where it has the opposite effect, however: In D. melanogaster, Or65a mediates that mated females are less attracted to the sex pheromone of other males.

The evolution of sex pheromones still holds many mysteries. A new odor signal produced by one sex must also be perceived and correctly interpreted by the other. In the case of the two southern subspecies of Drosophila mojavensis, one sex pheromone was lost in the course of evolution, while another mating signal, the courtship song of the males, was given a higher priority. "We are currently identifying potential pheromones from a large number of flies. In order to gain a better understanding of pheromone evolution as a whole, we need to look more closely at other cases where either novel pheromones show up or where tiny chemical changes in closely related species might result in speciation events," says Bill Hansson, head of the Department of Evolutionary Neuroethology, explaining the further research plans.

Despite the complexity of changes in the production, detection and interpretation of mating signals, which do not always occur in a coordinated manner during the evolution of new species, one thing is certain: Females always find the right males, namely those of their own (sub)species. Whether they fall for a male scent or succumb to the charm of a song: it seems to be an advantage to weigh up all available clues thoroughly.