Polarstern returns to the MOSAiC floe 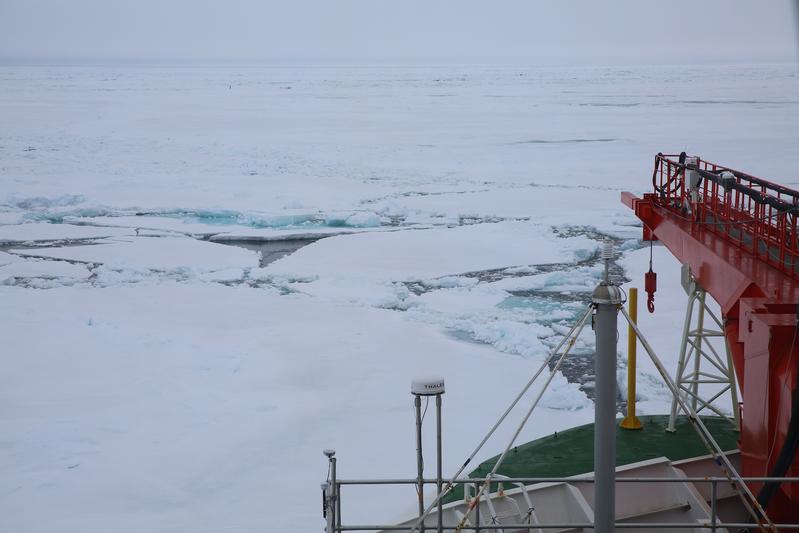 After a month’s absence, on 17 June the German research icebreaker Polarstern rendezvoused with the MOSAiC floe at 82.2 ° North and 8.4 ° East, after having left it on 19 May 2020 to exchange personnel and bunker supplies near Svalbard. Full of energy, the research team for the fourth leg of the expedition, which consists of experts from 19 countries, is looking forward to continuing the one-year-long MOSAiC expedition and its research on the ocean, ice and atmosphere in the Arctic. Earlier this week, their predecessors from Leg 3 returned to Bremerhaven on board the research vessels Sonne and Maria S. Merian.

The location of Polarstern’s destination was never in doubt: autonomous monitoring stations transmit positioning data from the drifting floe at regular intervals. Far more importantly for research purposes, however, is the fact that the stations continued to gather a wealth of important data during Polarstern’s absence, e.g. on energy balances – energy transfers between the atmosphere, ice and ocean – and much more, ensuring that valuable time series on fundamental parameters could continue while the researchers were away. Needless to say, this is no substitute for on-site fieldwork; accordingly, the team for the Leg 4 is eager to get started.

First impressions of the floe upon returning: “The thickest area of the floe, which we dubbed the fortress, has for the most part weathered the deformations in the spring quite well, and continues to offer a good basis for our research camp,” reports Prof Markus Rex, leader of the MOSAiC expedition, an atmospheric physicist at the Alfred Wegener Institute, Helmholtz Centre for Polar and Marine Research (AWI), and a professor at the University of Potsdam. “We’ll be able to continue working here well into the summer. But, with the extensive summertime melting that has now already begun, we’ll need to keep our instruments and installations highly mobile, and be ready to adapt to changing circumstances. Later in the summer, it may be necessary to relocate the camp – it all depends on how the ice conditions develop,” says Rex, who also led the first leg of the expedition, which began in September 2019. The lessons learned during the search for the ideal MOSAiC floe have now done him yeoman’s service: just like last autumn, the Polarstern dropped anchor just outside the research area, and sent teams out to scout the ice conditions. The ship will only manoeuvre into her final position a few days from now.

Docking manoeuvres are one of the many situations in which the captain’s experience and navigational skills are essential. After the latest crew exchange Thomas Wunderlich took over, relieving Stefan Schwarze. The two captains had – unlike all the other crewmembers – decided there would be only one exchange in the entire expedition. “What’s most important, just as it was back in the days of the early explorers, is to not just charge in, but to find the ideal position for entering the ice,” says Captain Wunderlich with regard to approaching the floe. “For the first few days, we made good and rapid progress, thanks to the prevailing winds and good visibility.” But from 82 ° North, the situation grew ‘tenser’: the ice dynamic increased, and the ice grew thicker. “As a result, on the weekend of 13/14 June, the pack ice slowed us to a standstill, forcing us to shut down the engines to conserve fuel. But coming to a dead stop like this also has the advantage of showing you: nothing about this venture is predictable or can be taken for granted – sometimes you just have to accept your circumstances,” Polarstern’s captain explains. His greatest wish: “…that we can stay with the floe as long as possible, so as to accompany it from birth through the end of its lifecycle – even though doing so will pose an enormous challenge for logistics and navigation.”

“In the summer that’s just now beginning, we’ll investigate the processes at work in the Arctic climate during the melting season in unprecedented detail,” stresses Markus Rex. These include ocean eddies, which are produced below the ice by ocean currents; how the thickness and properties of sea ice influence climate processes; the role of snow cover on sea ice; and the nature of the interplay between the sea ice, atmosphere and clouds. The summertime melting has now begun, producing pools on the surface of the sea ice that alter its energy budget. When the ice ultimately breaks, the resultant leads and channels release water vapour and aerosols, which lead to cloud formation in the atmosphere. What the characteristics of these clouds are, and whether the cool or warm the lower atmospheric layers, are some of the other questions that the research team will explore before the Polarstern departs for her homeport in Bremerhaven, where the icebreaker is expected to arrive on 12 October.

On 15 June 2020, the team from Leg 3 arrived in Bremerhaven on the research vessels Maria S. Merian and Sonne. They had departed for the expedition from the Norwegian port of Tromsø in late January, and had continued their fieldwork substantially longer than originally planned. Hopefully they enjoyed their return trip just as much as Thomas Wunderlich and his crew, who found themselves in the unaccustomed role of ‘passengers’ on board other research ships: “I’d like to take this opportunity to thank the crews of the Maria S. Merian and Sonne for their openness, friendliness and hospitality. It was a real pleasure, and we learned a thing or two. But I’m confident the feeling is mutual,” says Thomas Wunderlich of the journey to the Arctic.

On the MOSAiC expedition, experts from 20 nations will study the Arctic for an entire year. For this purpose, from autumn 2019 to autumn 2020 the German icebreaker Polarstern will drift across the Arctic Ocean, trapped in the sea ice. MOSAiC is being coordinated by the Alfred Wegener Institute, Helmholtz Centre for Polar and Marine Research (AWI). In order for the unprecedented project to be a success and produce as much valuable data as possible, over 80 scientific institutes are working together in a research consortium. The expedition’s total budget is over 140 million euros.

For the latest news straight from the Arctic, check the MOSAiC channels on Twitter (@MOSAiCArctic) and Instagram (@mosaic_expedition) using the hashtags #MOSAiCexpedition, #Arctic and #icedrift.

For further information on the expedition, visit us at: www.mosaic-expedition.org

Or you can use the MOSAiC Web App to track Polarstern’s drift route and follow events on-site live: follow.mosaic-expedition.org