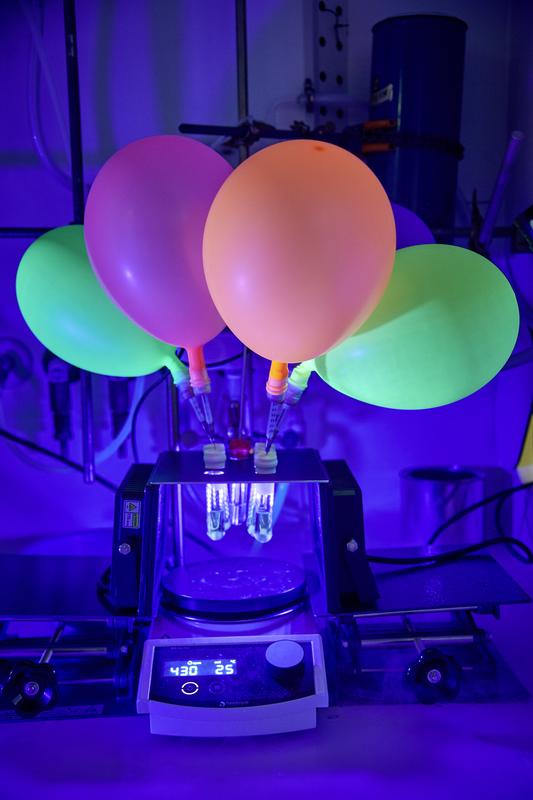 In the beginning, we simply took balloons, blew them up in the lab and put them over the apparatus." - Experiment with gas entering the reaction vessel. | Copyright: Nordlicht/LIKAT

Based on cellulose, e.g. waste from agriculture, a sustainable plastic can be produced in a few steps with suitable catalysts. The applications of PEF (polyethylene furanoate) are many and varied: from textile fibres to diapers and packaging materials. | Copyright: LIKAT
❮ ❯

Young researchers at the Leibniz Institute for Catalysis, LIKAT, in Rostock have developed a catalytic process for bio-polymers that runs under very mild conditions. The results are building blocks of the plastic PEF, a sustainable alternative to PET beverage packaging. The production of PEF building blocks does not require petroleum, but instead cellulose, i.e. biomass, and essentially only alcohol and air. The process can be transferred into practice immediately. To make it freely accessible, the young chemists published their findings on an open-access platform.

Coca Cola was the first company to build a plant bottle factory in the USA for beverage bottles made of polyethylene terephthalate (PET), which are produced entirely from plant material - but with a high energy input. The conventional process for the PET building blocks requires temperatures of up to 300 degrees Celsius and a pressure of around 100 bar.
"These harsh conditions have so far weakened the industry's enthusiasm for biobased plastics," said Dr. Esteban Meija. He is head of the "Polymer Chemistry and Catalysis" junior research group at LIKAT. The work on the new process was carried out under his leadership. The result is quasi the "green brother" of PET: PEF, full name: polyethylene furanoate. The PEF process manages with a maximum of 60 degrees Celsius, operates at normal atmospheric pressure and can increase its productivity 15 times over under continuous flow conditions. Dr. Meija: "This makes bio-based polymers such as PEF interesting again for industry.”

The starting material for the PEF building blocks is a so-called platform chemical, a furan derivative called HMF, which is produced from cellulose, a polysaccharide from waste products such as agricultural waste. Laboratories around the world are conducting research on a dozen such platform chemicals in order to convert the raw material for chemistry from crude oil and natural gas to biomass on a large scale. HMF, to be precise: hydroxymethylfurfural, is one of the hot candidates, as Esteban Meija says. However, new ideas are also needed for the simple and cheap implementation of this raw material and its products on a large scale.
Dr. Meija's research contacts with Vietnam led to cooperation with Nguyen Trung Thanh, a professor at Hanoi University of Technology. Meija's junior research group offered him the opportunity to develop a simplified process for the production of HMF from rice straw in his habilitation thesis. In parallel, Meija assigned a student from Venezuela, Abel Salazar, the task of improving the PEF process based on HMF.

Balloons in the Laboratory

In principle, in this process, a mixture of HMF and alcohol reacts with oxygen and in the presence of a catalyst to form an ester, or more precisely a diester, which can be polymerised to PEF in a further step (see scheme). Compared to the previous process, the new process at the LIKAT manages with a fractional amount of heat and pressure. On top of that, the researchers do not supply the required oxygen to the reaction in concentrated form, but rather from the air - which simplified the process considerably and apparently also increased the fun factor of the experiments: "At first we simply took balloons, blew them up in the laboratory and put them over the apparatus. With three or four reactions at the same time, it made for a nice party scene in the lab.
But the use of room air had a disadvantage for the reaction: it ran too slowly. The product could only be examined the next morning. Meija and his team solved the problem in two places. First, they slightly increased the pressure and found an optimum at 20 bar. "Secondly, we replaced our reaction vessel with a microflow reactor."

The starting materials, essentially a mixture of HMF and alcohol, are pressed through a system of fine tubes with oxygen or air. Due to the capillary forced guidance, the oxygen molecules come into contact with the starting mix in a well-dosed manner. The reaction mixture then passes through a cartridge. There the catalyst is located, which starts the reaction, in this case particles of cobalt oxide and ruthenium, applied to the surface of small beads.
This arrangement enables the "oxidative esterification", as chemists call this reaction, and above all it allows a continuous process. The catalyst is not consumed, it can be used again and again. The product, the esterified PEF component, leaves the cartridge as a liquid and can now be polymerized.
"Our reaction now runs 15 times faster than when the experiments began," says Esteban Meija. The chemist is convinced that the result will interest many people. "That's why we have decided to publish the results in open access."