Climate Extremes Will Cause Forest Changes 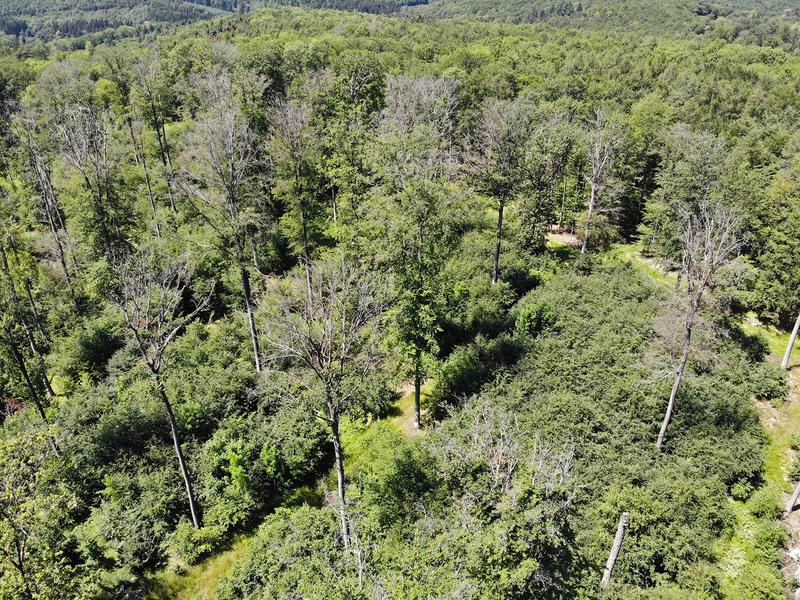 No year has been as hot and dry as 2018 since climate records began. Central European forests showed severe signs of drought stress. Mortality of trees triggered in 2018 will continue for several years.

Until now, 2003 was considered as the driest and hottest year since the beginning of instrumental climate recording. This record can now be considered obsolete: "The past five years were among the warmest in Central Europe since record, and 2018 was the most extreme one," says Professor Bernhard Schuldt from Julius-Maximilians-Universität (JMU) Würzburg in Bavaria, Germany.

The average temperature from April to October 2018 was on average 3.3 degrees Celsius above the long-term average and 1.2 degrees higher than in 2003, Schuldt and a research team report in the journal Basic and Applied Ecology. This had dramatic consequences for the forests in Germany, Austria and Switzerland.

Water transport through the wood collapses

"At such temperatures, our Central European vegetation reaches its limits," says the JMU professor. Together with other researchers from Germany and Switzerland, the plant ecologist was able to confirm with physiological measurements: When it is too hot, the tree simply loses too much water via its surface. As a result, the negative tension in the wood's conducting tissue becomes too steep, which ultimately leads to hydraulic failure interrupting the water transport.

Already during the course of the summer, severe drought-related stress symptoms were observed in most ecologically and economically important tree species, including widespread leaf discoloration and premature lead shedding.

Spruce and beech trees most affected

Moreover, unexpectedly strong drought-legacy effects were detected in 2019: many broad-leaved trees did not unfold their leaves – they had died. Others that survived the 2018 event where not able to withstand the following drought in 2019, or became increasingly susceptible to infestation with bark beetles or fungi.

"Spruce was most severely affected, mainly because this mountainous species has been planted outside its natural habitat in Central Europe," explains Schuldt. "Unexpected was, however, the extent to which beech trees were affected. Here in Northern Bavaria, I have seen several stands with complete dieback, especially on sites with shallow soil". Until this event, beech has been considered as "future tree species", even though its drought tolerance has been controversially discussed since the hot drought in 2003.

This year’s climatic condition in spring again started too warm and too dry. "Now in June 2020 we have fortunately received high amounts of rainfall," the Würzburg professor is pleased to report. This has mitigated the situation, but the water deficit in the deeper soil layers has certainly not been recharged. Therefore, he assumes that affected trees will continue to die-off in the coming years due to legacy effects.

So what should one do? "I think that extreme drought and heat events will become more frequent in near future due to climate change," says the JMU scientist. At least locally, forests will therefore have to be restructured. Mixed forests with tree species that are as drought-resistant as possible are needed. "However, we still have to identify what species combination is best suited, also from an ecological and economic perspective. This is going to take some time."

More data are needed to manage this forest conversion as good as possible. "Although damages to our forests are obvious, it is difficult to quantify them at high temporal and spatial resolution."

Therefore, remote monitoring systems are needed to support ground-based measures. Remotely sensed airborne or satellite earth observation data with high temporal and spatial resolution will enable us to track individual tree dieback and provide these data to the scientific community. "In the US, such systems are operating in given regions, but they are currently lacking for Central Europe. We will not be able to monitor forest health from the ground at larger scales."

This study with contributions from various scientists from Germany and Switzerland resulted from a workshop of the working group Ecosystem Research of the Ecological Society of Germany, Austria and Switzerland (Gesellschaft für Ökologie).