TU Braunschweig/DZNE Bonn: Sepsis can have long-term negative effects on the brain 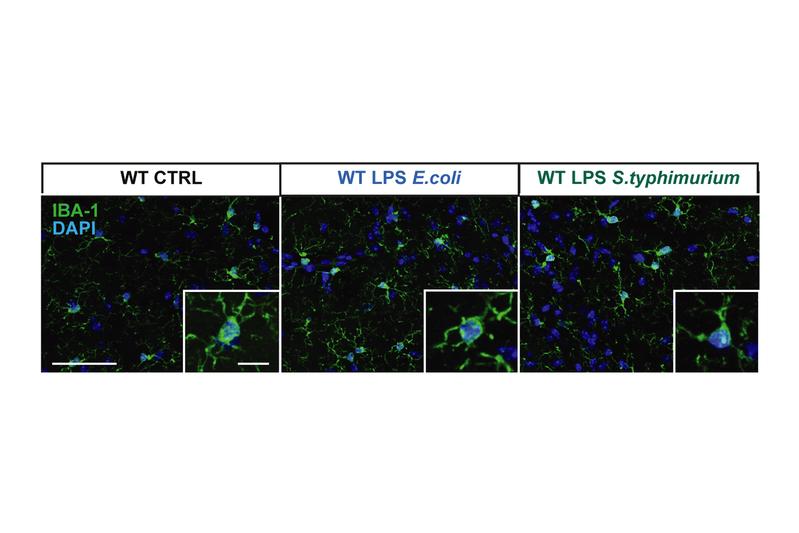 Infections can trigger a particularly strong immune reaction of the body (termed sepsis). In such a sepsis the immune system reacts so strongly that not only the pathogens but also tissues and organs are damaged. In a study with mice, researchers from the Technische Universität Braunschweig were able to show that sepsis can have long-term effects on the brain and learning behaviour even after recovery from the sepsis itself. Inhibition of the protein complex NLRP3 could prevent these negative effects. The study has now been published in the Journal of Neuroscience. The German Center for Neurodegenerative Diseases and the Universität Bonn were also involved in the study.

Microglial cells are immune cells in the brain and belong to the innate human immune system. When pathogens attack the brain, they activate special protein complexes known as inflammasomes. These trigger a neuroinflammation, an inflammatory reaction in the brain to render the pathogens harmless. As a rule, this reaction ends when the patient recovers.

"Neuroinflammation, i.e. inflammatory processes in the brain, also play a major role in sepsis. This was the starting point for our study. We investigated the long-term effects of sepsis on the brain of mice and the influence of the inflammasome NLRP3. This has never been researched with such a long-term prospective before," says Professor Martin Korte, neurobiologist at the Zoological Institute of TU Braunschweig and head of the research group "Neuroinflammation and Neurodegeneration" at the HZI.

The researchers were able to show that sepsis can cause chronic inflammation of the brain and thus have negative long-term consequences. To investigate this, Professor Korte's team, together with the neurologist Professor Heneka from Bonn, conducted a study with mice. The animals were injected with components of bacterial cell membrane to induce sepsis. After three months, the scientists then examined the animals' brains and learning behaviour: They found that their neurons had fewer synapses and that synaptic plasticity was reduced, i.e. the ability of their synapses to reinforce themselves as a prerequisite for learning. As a result, the animals performed worse in the behavioural test than the control groups.

"We were able to show that the consequences of sepsis can still be observed in the brain three months later. What is special about our study is that we compared young and older mice. This showed that the consequences of neuroinflammation caused by sepsis were still clearly visible in older mice after three months compared to younger mice," said Niklas Lonnemann, who is one of the first authors of the publication together with Marianna Beyer.

When NLRP3 is inhibited

The research team suspected that the inflammatory reactions in the brains of the mice were triggered by the inflammasome with the name “NLRP3”. In a next step, they therefore used so-called knockout mice which did not produce a NLRP3 molecule, and acutely inhibited the NLRP3 in other mice with drugs. They also examined the brains of these mice 3 months after recovery from the sepsis.

The result: Without the NLRP3, no chronic inflammation in the brain developed. Therefore, the sepsis had no negative effects on the animals' learning behaviour. "If the NLRP3 inflammasome is inactivated, it is clearly visible in the animal model that this has positive consequences for the brain. Yet the risk of the brain becoming diseased does not seem to increase. The immune system obviously has other signalling pathways to deal with the pathogens," says Martin Korte. "These are extremely exciting results. They open up possibilities for therapeutic treatment with agents that specifically inhibit NLRP3 and thus prevent potential negative consequences for the brain without compromising the immune system as a whole."

Stronger response in mice with Alzheimer symptoms
The inflammasome NLRP3 plays a role in various inflammatory reactions, presumably also in Alzheimer's disease. That is why the researchers also investigated the long-term effects of sepsis on the brain of mice that develop symptoms similar to those of Alzheimer's patients.

"Older mice with partially presenting Alzheimer's symptoms were even more affected by the immunological response by NLRP3 than the older mice without the Alzheimer's symptoms," says Martin Korte. "Due to the disease, the brain of the Alzheimer mice seems to be primed for inflammatory processes and therefore presumably respond more quickly and strongly to them. This might also be a possible explanation as to why patients in old people's homes are so strongly affected by Covid-19, since such an infection induces similar immunological reactions in the brain as in sepsis".

From mouse to human?
The results from a mouse model cannot be transferred to humans one-to-one. The mouse model of Alzheimer's disease only represents part of the disease. In addition, the immune system of mice is not completely identical to the human immune system. Nevertheless, the nerve cells of both are very similar and the inflammasome NLRP3 is also present in both humans and mice.

Clinical studies will have to show whether the inhibition of NLRP3 in humans can also lead to a state in which sepsis does not have long-term negative consequences for the brain. This is being investigated by the research group of Professor Michael Heneka from the German Center for Neurodegenerative Diseases (DZNE). The study of the TU Braunschweig has contributed to this.

Details of the study

The study was carried out in the core research area of Infection and Therapeutics at the TU Braunschweig. For the studies 120 mice were used. The animal experiments took place at the TU Braunschweig. The study was carried out under strict safety and animal protection conditions and was financially supported by a joint project of the Helmholtz Association between HZI and DZNE, the Collaborative Research Center 854 in Magdeburg and the German Research Foundation (DFG).