Quick notes in the genome 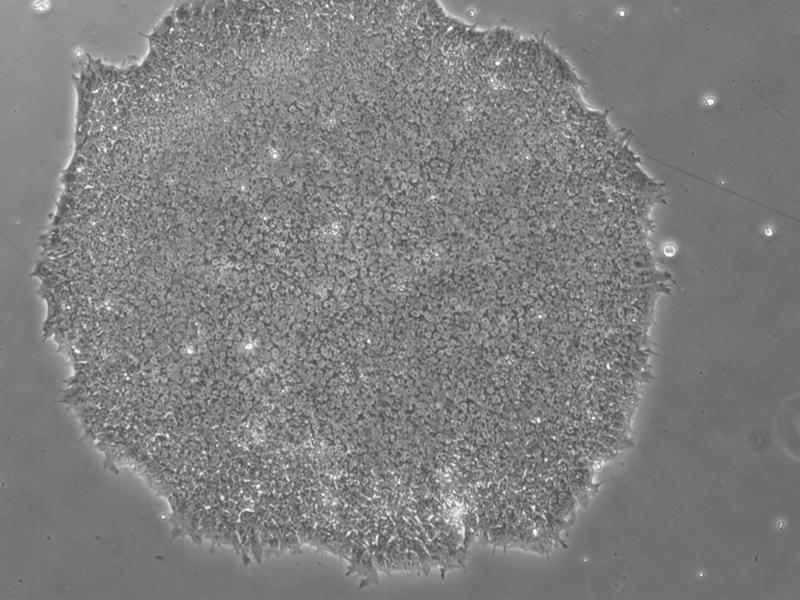 How do stem cells stay stem cells whilst preserving information necessary to mature into specialized cell types? Jocelyn Charlton, a member of Alexander Meissner's team at the Max Planck Institute for Molecular Genetics (MPIMG), discovered a new mechanism for the control of genetic activity that might allow cells to respond rapidly to differentiation cues. The results were published in Nature Genetics.

Our genome is like a "book of life" that contains directions for each cell and the entire organism. But in order for each molecule to make its appearance at the right time, labels, notes and emphasis on top of the actual text are necessary. After all, not every single page is equally important for every cell type at all times.

Certain passages of the DNA are only relevant during embryonic development, others are only read after differentiation into muscle, skin or neural cells. When the wrong sections are accessed – or even only in the wrong order – developmental disorders or other diseases may result.

Cells enzymatically attach small chemical modifications (“methyl groups”) to the DNA – more specifically to cytosine dinucleotides – leaving the underlying genetic information untouched. Methylated DNA is generally protected from the cellular machinery that reads information from the genome, hence the methylation of regulatory parts of the DNA is associated with their silencing. Demethylating enzymes counteract this process by removing the methyl groups and erasing the labels, allowing for activation.

Contrary to previous assumptions, methylating and demethylating enzymes are in constant competition with each other – at least at certain genetic control sequences in human embryonic stem cells. This is what Jocelyn Charlton from Alexander Meissner's lab at the Max Planck Institute for Molecular Genetics (MPIMG) found. She presents her findings in the current issue of the scientific journal Nature Genetics.

Notes and cross-references in the genome

Charlton investigated stem cell lines that lacked different combinations of methylating and demethylating enzymes by specifically excising or “knocking out” the genes coding for the respective enzyme using CRISPR-Cas9 – silencing methylating DNMT enzymes as well TET enzymes that demethylate DNA and thereby erase the labels again. She also created the first cell line that lacks all five enzymes that are able to alter DNA methylation states.

Charlton and her colleagues cultured the genetically modified cells and sequenced their DNA to determine which sections contained methyl groups and noted remarkable differences across enhancer sequences. These DNA segments activate genes with the help of other factors. Depending on the cell type and stage of development, a wide variety of enhancers are normally active.

“Somatic enhancers are not yet active in pluripotent stem cells, as they are only required after differentiation,” says Charlton. But while inactive, she found that thousands of somatic enhancers experienced a process where methyl groups were persistently added and removed. “There is actually quite a lot of turnover of methylation,” says Charlton.

The researchers first observed that cell lines lacking methylating DNMT enzymes quickly lost DNA methylation at tens of thousands of enhancer sites. However, when the DNMTs were knocked-out in cells first depleted of TET activity, the same regions remained highly methylated. This confirmed that TET enzymes were responsible for the targeted demethylation. Further analysis showed that the same regions were enriched for demethylation by-products.

Charlton and her colleagues concluded that DNMT and TET enzymes are competing locally at these sites. “We found that this methylated silenced state isn't as stable and inert as we previously thought,” says Charlton. “It's actually a highly dynamic state.”

About one third of all examined enhancers are affected, the other two thirds are either in a demethylated state but kept inactive by modifications to the chromatin “packaging” of the DNA instead, or are methylated but unaffected by the process. And as soon as the stem cells mature into differentiated somatic cells, the enzymatic competition ceases.

Mechanism and function to be explored

“These findings open the door to a lot of further research,” says Charlton. “Many exciting biological questions remain, including the purpose of dynamic methylation turnover at somatic enhancers.”

The process has to cost the cell a lot of energy and the scientist and her colleagues wonder why the dynamic is important. “It could be a new epigenetically poised state, a mechanism to keep important regulatory elements inactive but readily available,” speculates Charlton. “This could allow cells to turn certain enhancers on and off very quickly when needed.”

How the enzymes find their way to their target regions is still unknown. “Neither the DNMTs nor the TETs have a specific structure or a motif with which they bind DNA, there is something else that is recruiting them there,” says Charlton. “Whether another protein or non-coding RNA bring them to the sites, we don't yet know. This is something else to follow up on.”

Despite the many unanswered questions, Charlton says the work was a huge success. “You wouldn't know there is this dynamic turnover unless you look across the different knock-outs and compare sites that switch methylation states,” says the researcher. “It’s exciting to see this completely new mode of regulation we didn’t know before.”