Time To Say Goodbye: The MOSAiC floe’s days are numbered 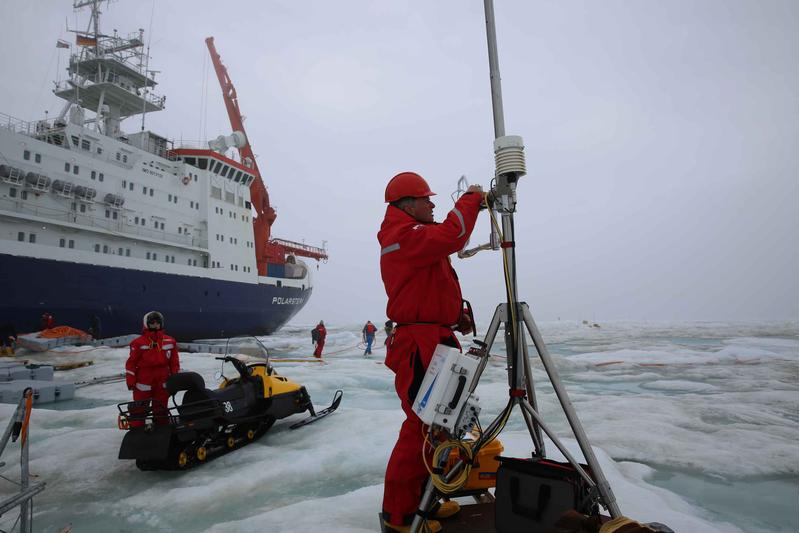 After exactly 300 days of drifting with the MOSAiC floe, the international team around Expedition Leader Markus Rex on Wednesday, 29 July 2020, started the dismantling of the research camp and evacuation of the floe. Just one day later the floe finally broke into several fragments. After accompanying the floe on its journey for ten months, the team will now shift its focus to the last remaining puzzle piece in the annual cycle of Arctic sea ice: the start of the ice formation process.

It came as expected: with a loud bang, on 30 July the MOSAiC floe broke into several fragments, which will drift out to the open ocean of Fram Strait within the next few days. Momentarily, the floe fragments are five kilometres apart from the ice edge. But the experts’ timing was flawless: they continued their work with the complete research camp until the very end, before efficiently dismantling it and bringing all their equipment back on board, all within a day. Thereby it was possible to also document the very last phase of the life of the MOSAiC floe as planned - an impressive success for the expedition.

“We’ve successfully monitored the lifecycle of the MOSAiC floe from early October last year to its end. It carried us through the Arctic Ocean for a total of 1700 kilometres, from the Laptev Sea, past the North Pole and all the way to Fram Strait. Here at the sea-ice edge its natural lifecycle comes to an end: the fragments will continue to grow thinner and be broken up by waves, until they ultimately melt and once again become part of the seawater, from which the floe was formed nearly two years ago off the Siberian coast. Accordingly, the concept for the expedition has been completely fulfilled,” says Expedition Leader Prof Markus Rex from the Alfred Wegener Institute, Helmholtz Centre for Polar and Marine Research. “Now we’ll focus on the last piece of the puzzle in the annual cycle: the start of freezing at the end of the summer. For this phase we’ll be heading farther north, where the ice formation will soon begin.”

Initially, however, the Polarstern will remain near the ice edge, until the Russian research icebreaker Akademik Tryoshnikov joins her in the near future. The latter ship will bring with her the research team for the last MOSAiC leg, new crewmembers, provisions and fuel, as well as consumables.

On 4 October 2019, following a fairly brief but intensive search, the participants in the MOSAiC expedition allowed their ship to freeze to the floe where they would subsequently erect their research camp for the drift through the Arctic Ocean. Finding the right floe proved to be an enormous challenge, since, after the warmest Arctic summer to date, there were very few floes in the expedition’s starting region that were suitably thick. The one they ultimately chose was formed – as they subsequently discovered – near the New Siberian Islands in December 2018, and had already covered a distance of 2,222 kilometres, following a zigzagging course. Above all, the team valued one exceptionally stable area of the floe, which proved to offer a good location for the research camp. At the same time, other parts of the floe were relatively thin and dynamic, making them good representatives of the ‘new Arctic’; it was precisely this combination that made the floe an outstanding candidate for the planned scientific projects. In the course of the year, storms repeatedly produced new leads and pressure ridges, which at times made the expedition participants’ work much harder. But generally speaking, the floe remained stable to the very end – even during the melting season, when neighbouring ice sheets broke up, one after the other.

“Last autumn we looked for, found, scouted, colonised and investigated our floe from every possible perspective. Ever since, it has been a steadfast, stable basis for our research camp. Over the many months the ice floe has become our home, and we’ll always remember it fondly. But now it becomes water again. The time has come to bid it farewell and head north for the final phase of the expedition,” says Markus Rex.

On the MOSAiC expedition, experts from 20 nations will study the Arctic for an entire year. For this purpose, from autumn 2019 to autumn 2020 the German icebreaker Polarstern will drift across the Arctic Ocean, trapped in the sea ice. MOSAiC is being coordinated by the Alfred Wegener Institute, Helmholtz Centre for Polar and Marine Research (AWI). In order for the unprecedented project to be a success and produce as much valuable data as possible, over 80 scientific institutes are working together in a research consortium. The expedition’s total budget is over 140 million euros.

For the latest news straight from the Arctic, check the MOSAiC channels on Twitter (@MOSAiCArctic) and Instagram (@mosaic_expedition) using the hashtags #MOSAiCexpedition, #Arctic and #icedrift.

For further information on the expedition, visit us at: https://mosaic-expedition.org/

Or you can use the MOSAiC Web App to track Polarstern’s drift route and follow events on-site live: https://follow.mosaic-expedition.org/

For any requests please contact the AWI’s Communications Dept. via: media(at)awi.de

Printable images are available in the online version of this press release at: https://www.awi.de/en/about-us/service/press.html

General photos of the MOSAiC expedition are available here: https://multimedia.awi.de/mosaic/

General video footage about MOSAiC can be downloaded here: https://multimedia.awi.de/mosaicvideo/