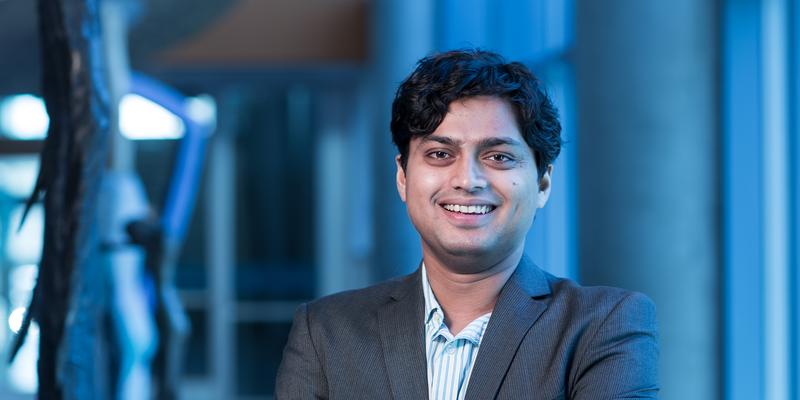 They do not think like us, they do not see like us, they do not navigate like us. Accordingly, the communication and cooperation between robots is different from that between humans. Dr. Aamir Ahmad has been appointed to the first professorship for flight robotics at the Institute of Flight Mechanics and Controls (IFR) at the University of Stuttgart from September 1, 2020. He focuses on the perception of robotic systems with a particular emphasis on aerial robots. Previously, he was a research group leader in the Perceiving Systems Department at the Max Planck Institute for Intelligent Systems in Tübingen.

Prof. Wolfram Ressel, Rector of the University of Stuttgart, is pleased to welcome Dr. Ahmad as a new faculty member: “With his focus on aerial robots, Ahmad adds a very important aspect to our existing research spectrum in the area of robotics and artificial intelligence. His research makes a significant contribution to the University of Stuttgart’s vison Intelligent Systems for a future society. We are pleased that Dr. Ahmad is now both continuing his activities in the Cyber Valley research consortium and complementing our excellent team at the Faculty of Aerospace Engineering and Geodesy.”

Anyone who has ever flown a drone knows how challenging it can be, as it calls for avoiding obstacles and being careful not to fly into them. It’s also not so easy to film your own dog in a field, for example, because it’s often impossible to predict which direction it will take next. Intelligent systems make it increasingly easy to identify obstacles and avoid them or detect moving objects and follow them. However, things get complicated when more than one aerial robot is in use simultaneously. How can individual robots exchange information and coordinate their actions so that they can collectively recognize an object and act accordingly? These are some of the questions that Ahmad’s research addresses.

“I am very pleased to be taking on this new challenge,” says Ahmad, who will be teaching Advanced Estimation for Flight Robotics. “I am fortunate that the University of Stuttgart has offered me the opportunity to add the field of flight robotics to the existing research of the aerospace faculty. I am also grateful that my previous position at the Max Planck Institute for Intelligent Systems (MPI-IS) in Tübingen gave me the opportunity to drive forward my research on vision-based multiple aerial systems over the past three years.”

Ahmad and his research group focus on vision-based perception in multi-robot systems, particularly aerial robots. They are interested in investigating how the formation of a group of aerial robots can be controlled in the air. In practice, this is necessary whenever several aerial robots have to avoid a fixed obstacle or when they want to follow a moving object. Often, pre-specified formation geometry is used, but Ahmad and his team try to solve this problem differently. Equipped only with cameras, the individual robots exchange limited information with each other and develop a coherent understanding of the overall scenario to adjust their formation accordingly. The long-term goal of the team’s research is to gain a better understanding of how teams of robots can efficiently navigate, cooperate, and communicate with one another.

Over the course of the AirCap project at the MPI-IS, Ahmad has led his group of researchers in conceptualizing and developing a team of micro-aerial vehicles (MAVs) for markerless and outdoor human motion capture (MoCap). The system, which comprises multiple cooperating aerial robots, is the first that is capable of autonomously detecting, tracking, and following a person in a natural outdoor environment without the use of sensors or markers. Thanks to the MAVs’ onboard cameras and the system’s state-of-the-art back end, a human subject’s 4D skeletal pose and body shape can be reconstructed with a high level of accuracy. Such systems show great promise for application in a broad range of areas, like search and rescue operations, wildlife conservation, agriculture, and construction safety monitoring.

Ahmad received his Bachelor of Technology in Civil Engineering from the Indian Institute of Technology (IIT) in Kharagpur, India. He then was a postdoctoral fellow at the University of Lisbon’s Institute for Systems and Robotics, where he completed his PhD in Electrical and Computer Engineering. He then went on to work as a research scientist at the Max Planck Institute for Biological Cybernetics and the MPI-IS in Tübingen. An award-winning scientist and leading young researcher in the field of flight robotics, Ahmad received the Marie Curie Intra-European Fellowship in 2013, one of the world’s most competitive academic fellowships. In addition to his teaching and research activities at the University of Stuttgart, Ahmad will continue to lead the Robot Perception Group’s research projects at MPI-IS in Tübingen. He also plans on co-supervising PhD students for the International Max Planck Research School for Intelligent Systems (IMPRS-IS).

Cyber Valley is Europe’s largest research consortium in the field of artificial intelligence, with partners from politics, science, business, and society. The partnership strengthens research and teaching in the fields of machine learning, computer vision, and robotics, as well as the connections between these scientific disciplines. The partners include the MPI-IS, the universities of Stuttgart and Tübingen, the state of Baden-Württemberg, the Fraunhofer Society, and seven industrial companies.