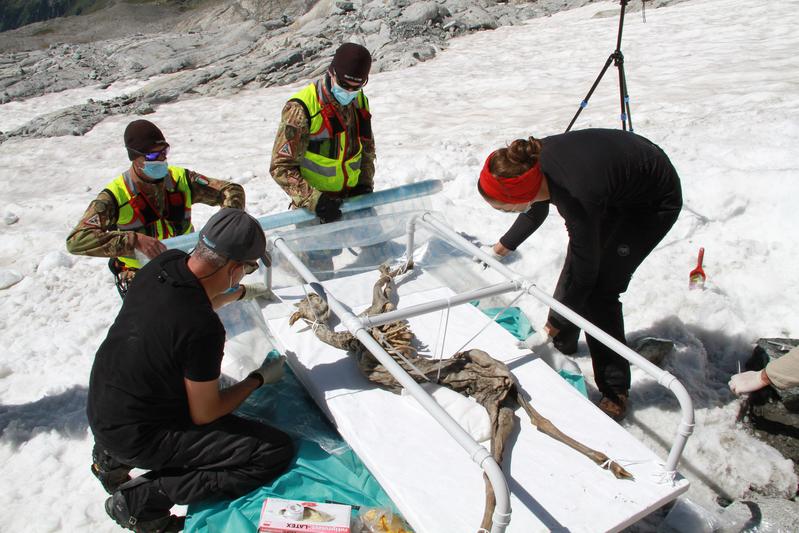 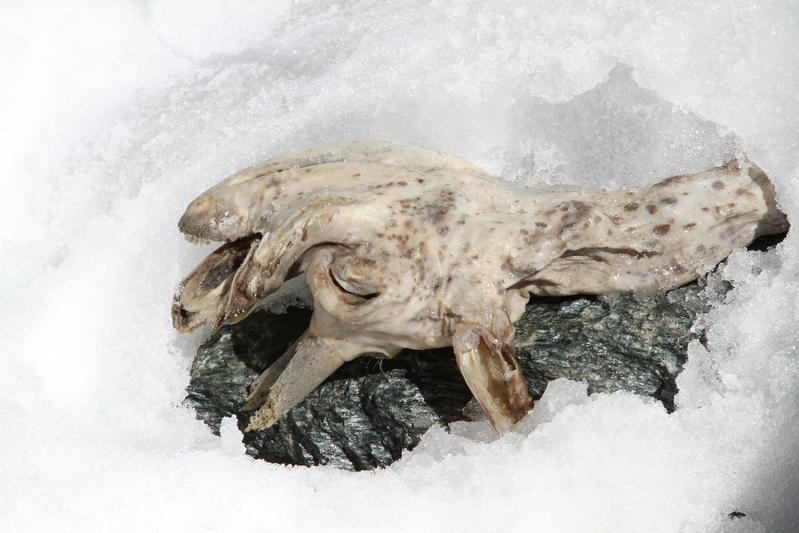 Discovered in Val Aurina (Alto Adige - Italy) and now in the laboratory of Eurac Research's mummy experts, the remains will be studied in order to improve the conservation techniques of mummies around the world.

At first glance, the chamois carcass did not seem to Hermann Oberlechner to be an unusual discovery as mountaineers often happen across the remains of wild animals during their high-altitude excursions.
However, upon a close inspection of the chamois skin, the Ahrntal alpinist realised that he was faced with a highly unique discovery and informed the relevant ranger.

The chamois had in fact been protected by the glacier for 400 years and only recently released due to the ice having receded. With the help of the Alpine Army Corps, the chamois mummy was brought back to the valley and entrusted to Eurac Research (Bolzano - Italy) for scientific study by the Department of Cultural Heritage. Due to their age and state of preservation, the remains are in fact a perfect simulant of a human mummy and will allow researchers to improve the conservation techniques of ice mummies all over the world while determining methods for the safeguarding of ancient DNA - a mine of valuable information for humanity.

In mummified specimens, DNA has often degraded and is present only in minimal amounts. In fact, faced with a new discovery, the first question experts encounter is how to examine the mummy while continuing to preserve it, without damaging its ancient DNA. Every action has irreversible consequences on DNA fragments, which makes experimenting with new techniques on human finds impossible. Contrastingly, an intact animal mummy is a perfect simulant for research - especially if its conditions are similar to those of the world’s other ice mummies, of which Ӧtzi and the Inca girl Juanita are among the most famous. "Thanks to our previous studies we know the optimal physical and chemical parameters for preservation from a microbiological point of view. In the laboratory we will bring the chamois to those conditions and focus on their effects on DNA. With repeated in-depth analysis we will verify what alterations the DNA undergoes when external conditions change," explains Marco Samadelli, conservation expert at Eurac Research. "Our goal is to use scientific data to develop a globally valid conservation protocol for ice mummies. This is the first time an animal mummy has been used in this way," adds Albert Zink, Director of the Institute for Mummy Studies at Eurac Research.

Upon encountering the chamois, Hermann Oberlechner soon realised the importance of the find. "Only half of the animal's body was exposed from the snow. The skin looked like leather, completely hairless; I had never seen anything like it. I immediately took a photo and sent it to the park ranger, together we then notified the Department of Cultural Heritage".

The discovery site, at 3200 m MSL, is impassable and can only be reached by a six-hour hike. For this reason, following their initial inspection, the researchers decided to ask for the support of the Alpine Army Corps in the recovery of the animal. "The request from Eurac Research came during a training phase of our military mountain rescue team. We plan regular exercises not only in order to always be ready to intervene and protect our personnel in high-altitude missions, but also if we are requested for civil protection too." commented Mario Bisica, Alpine Army Corps Head of Public Information and Communication.

The helicopter flight was organised in collaboration with the army’s specialised aviation corps, who have their own regiment in Bolzano, with pilots specifically trained to operate at high altitude. Thanks to the group effort, Eurac Research experts were able to reach the glacier and, with the help of the troops, carry out the scientific operation needed to recover the mummy. The chamois was then wrapped in an inert material casing made to measure by conservationist Marco Samadelli. The remains are now being kept at the Eurac Research Conservation Laboratory at NOI Techpark in refrigerated cell at - 5 C°, ready to be studied.

Glacier melt is leading to the increasingly frequent discovery of finds, including biological ones. Under the supervision of Eurac Research anthropologist Alice Paladin, the blanket of fresh snow and thick layer of ice covering the chamois mummy, were removed using various archaeological excavation tools. The precise operation required everyone’s collaboration and commitment to avoid any kind of risk, minimise contamination and ensure the find’s preservation.