Thanks to AI, robots are learning how to perform assembly tasks 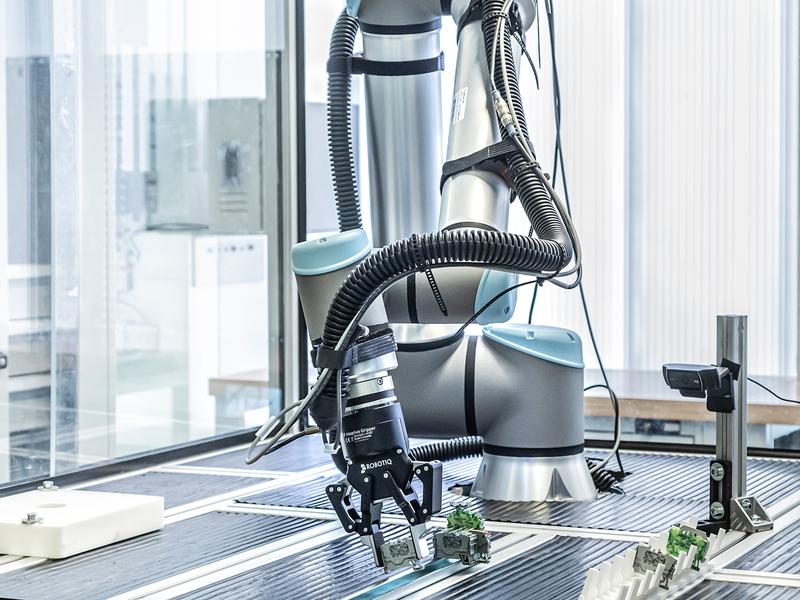 When it comes to assembly tasks, especially regarding small and medium lot sizes, up till now flexible robot programming has been a time-consuming and costly job. The "Rob-aKademI" research project, which was launched on July 1, 2020, aims to change this. The technologies used in the project, above all advanced simulation and machine learning, are intended to make programming easier and more autonomous.

The partners in the "Rob-aKademI" research project, including Fraunhofer IPA and the Institute for Industrial Manufacturing and Factory Operation IFF at the University of Stuttgart, are developing technologies to simplify robot programming and make assembly tasks easier to automate. The basis for this is a purely digital image - in other words a digital twin - of the manufacturing environment. Combined with a special programming framework, this twin is used in a physical simulation environment to teach robot skills for flexible assembly processes. In the simulation environment, the robot autonomously explores its environment and plans its behavior, optimizing it independently or learning continuously.

This is where Artificial Intelligence (AI) comes into play, or more precisely Machine Learning and its sub-area of so-called "Reinforcement Learning" (RL). This means that an algorithm learns according to the principle of trial and error, similar to a human being. In order to become better step-by-step, it receives a reward signal for each successful action it carries out.

In the course of the project, three application-related learning modules will be built that encapsulate expert robot programming knowledge as well as know-how about the assembly operation to be performed. The three modules are the “Perception Module” for object recognition, the “Force-controlled Joining” module for learning robust joining strategies and the “Snap-on Joints” learning module with a detailed physical joining model. These technologies are used to create robust robot programs to transfer simulation results into reality. The project partners validate their results with the help of three practice-based use cases, namely the assembly of a control cabinet, switch, and THT PCB. The modules for force-regulated joining and snap-fit connections are based on the already-available IPA software "pitasc" for force-controlled assembly tasks and will extend its capabilities.

With its project goals, "Rob-aKademI" focuses on the needs of increasingly personalized production. Currently, assembly applications still place high demands on robot programming. These include diverse and complex, often force-controlled, processes, high product variants and short cycle times. For many companies, especially small and medium-sized enterprises with their customer-specific products, it is therefore often not yet worthwhile to use robots for assembly tasks, particularly since they cannot be programmed without expert knowledge.

However, robots offer advantages, such as taking over non-ergonomic, dangerous or monotonous tasks, and delivering consistent quality. They can also be a decisive competitive factor, especially in high-wage countries such as Germany. Thanks to numerous analyses Fraunhofer IPA has already carried out worldwide on the potential to automate, the researchers know exactly what companies need and incorporate these findings in the project.

The “Rob-aKademI” project is part of the major program “KI01 KI in der Praxis” funded by the Federal Ministry of Education and Research. In the same program, Fraunhofer IPA is also working on another research project titled “Deep Picking”, which uses AI to optimize robot-based bin picking. Additionally, IFF is involved in the project "KI-basierte Roboterkalibrierung" (KIRK). Further information on the latter project can be found on the IFF website: https://www.iff.uni-stuttgart.de/en/research/cognitive-production-systems/