Time and brain size – of mice and men 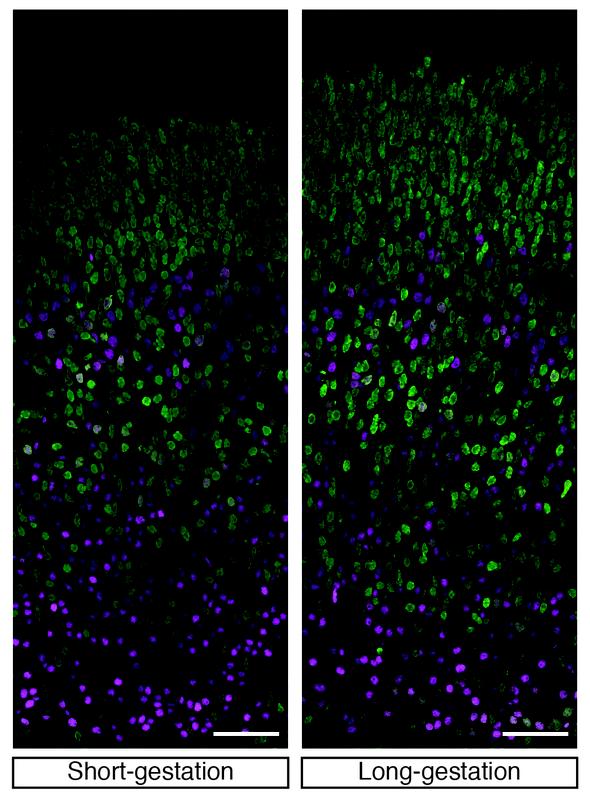 The neocortex, the largest part of our brain, enables us to speak, dream and think. During human evolution, the size of the neocortex has increased dramatically. To understand what caused this expansion, researchers at the Max Planck Institute of Molecular Cell Biology and Genetics (MPI-CBG) in Dresden have focused in previous studies on a gene called ARHGAP11B that is only found in humans and triggers an increased production of brain stem cells – a prerequisite for a larger brain. Now, studying different strains of mice, the same group has identified another, very different cause of neocortex expansion: the longer the gestation period (the time between conception and birth) of a species, the longer is the period during which neocortical neurons are generated (the neurogenic period), and the greater is the number of the so-called upper-layer neurons, a hallmark of neocortex expansion. The researchers also found that during pregnancy, the maternal environment has a dominant influence on the length of the neurogenic period and hence on the numbers of upper-layer neurons produced. They have thus uncovered a hitherto unknown link between the maternal environment and embryonic cortical neurogenesis during pregnancy.

The neocortex is evolutionarily the youngest part of the brain. The human neocortex is about three times bigger than that of our closest living relatives, the chimpanzees. In recent years a research team at the MPI-CBG, led by one of the institute’s founding directors, Wieland Huttner, has explored the cause of the evolutionary expansion of the human neocortex. The neocortex characteristically contains six layers of neurons, and it is primarily the upper layers that have expanded during evolution. Although previous studies of the research group have focused on genes that underlie this expansion, the group also suggested already in 2014, based on the results of a mathematical model, that among the species with highly folded brains the increase in neocortical neuron number can be explained by a longer neurogenic period – the developmental time window during which neocortical neurons are produced.

The current study of the group, published in the journal Current Biology, provides experimental evidence for the 2014 model that lengthening the neurogenic period is a key aspect of neocortical expansion. Samir Vaid, one of the lead authors of the study, explains: “When I started my work in the research lab of Wieland Huttner in 2014, I was intrigued by the findings of the mathematical model, which was just published back then, and I set out to experimentally prove it. We now find that indeed embryos of mouse strains with a longer gestation (20.5 days) exhibit a longer neurogenic period and, remarkably, produce more upper-layer neurons than embryos of mouse strains with a shorter gestation (19.5 days).” The relevance of this finding lies in the fact that humans are the primates with the longest gestation, the longest neurogenic period, and the largest numbers of neocortical neurons. The neurogenic period in humans is eight to nine days longer than that in the great apes (gorilla, orangutan). Samir Vaid further adds: “During neocortical neurogenesis, the upper-layer neurons are generated last. Hence, by simply extending the last phase of the neurogenic period, a specific increase in the upper-layer neurons is achieved, which is a hallmark of the evolutionary expansion of the neocortex.”

The influence of the mother on brain development

“We were, of course, very happy to be able to provide experimental evidence in mice for the 2014 model with its implications for human brain evolution”, adds Barbara Stepien, first author of the study. “However, we made a totally unexpected observation when we transferred short-gestation strain mouse embryos to long-gestation strain mothers and vice versa. Thus, we were astonished to see that it was not the genetic make-up of the embryo but rather the environment provided by the mother that determines how long the neuron-producing period is”, she continues. The team also analyzed a mouse-rat chimeric embryo, developing inside a rat mother, and found that factors in the rat environment influenced the upper-layer neuron generation by the mouse brain stem cells, suggesting that an external influence on upper-layer neuron generation may be a conserved phenomenon across species.

Implications for brain development and evolution

Wieland Huttner, who supervised the study, summarizes its implications: “The key aspect of this study is that in addition to specific genes, time emerges as a determinant of brain size in development and evolution. Interestingly, the action of genes and the role of neurogenic period length are not in conflict with one another. Thus, the human-specific gene ARHGAP11B implicated in human neocortex growth actually causes an extension of the neurogenic period. On a more general note, our present findings might help to gain further insight into the causes of, and remedies for, neurodevelopmental disorders, particularly those pertaining to cognition.”