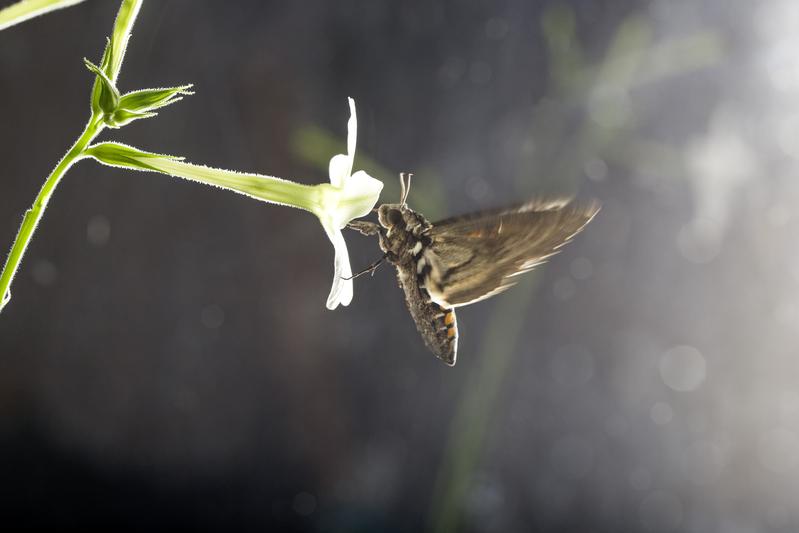 Tobacco hawkmoths are not attracted to flower odors when ozone levels are high; however, the moths are able to learn that odors modified by ozone may offer a reward, that is, nectar.

A team of researchers from the Max Planck Institute for Chemical Ecology in Jena, Germany, and the University of Virginia, USA, has studied the impact of high ozone air pollution on the chemical communication between flowers and pollinators. They showed that tobacco hawkmoths lost attraction to the scent of their preferred flowers when that scent had been altered by ozone. This oxidizing pollutant thus disturbs the interaction between a plant and its pollinator, a relationship that has evolved over millions of years. However, when given the chance, hawkmoths quickly learn that an unpleasantly polluted scent may lead to nutritious nectar (Journal of Chemical Ecology, September 2020, DOI: 10.1007/s10886-020-01211-4).

Pollination in the Anthropocene

Pollination is a critical ecosystem service, one that is performed mainly by insects. Flowers attract insects using floral scents, which are chemical signals that the pollinators can have an innate preference for. This preference is the result of the co-evolutionary relationship between flowers and their pollinators that has evolved over millions of years.

For about 20 years, the term "Anthropocene" has been used in the scientific community to refer to the geological epoch in which humans are responsible for many changes in biological and atmospheric processes. However, until recently, little has been known about the effects of anthropogenic climate change and atmospheric pollution on natural environmental odors that drive chemical communication between organisms.

A team of researchers from the Max Planck Institute for Chemical Ecology and the University of Virginia has investigated whether human-driven ozone pollution in the air influences the attraction of a pollinating moth to the scent of one of their favorite flowers. Ozone is an oxidant, a highly reactive chemical and pollutant known to cause respiratory diseases in humans. Now, ozone is also thought to change the floral scents that flowers emit to attract their pollinators.

For their experiments, the scientists used the tobacco hawkmoth Manduca sexta. “The hawkmoth Manduca sexta is the perfect model for our study. Although it is highly attracted by flower odors, it also uses its visual system to locate flowers. Flowers that usually attract hawkmoth often share specific compounds in their blend and are visually very conspicuous due to their bright white color,” says study leader Markus Knaden, who heads a research group in the Department of Evolutionary Neuroethology at the Max Planck Institute.

The research team first determined the exact compositions of the flower odors - with and without increased ozone content - and the respective concentrations of individual odor components using gas chromatography. For the ozone-altered odors, the researchers used ozone concentrations that can be measured on hot days in the natural habitat of tobacco hawkmoths. They tested the responses of the moths in behavioral assays in a wind tunnel, allowing the insect to investigate both the original floral odor and to the ozone-altered floral odor.

“We were surprised, even shocked, that the innate attraction to the odor of tobacco flowers was completely lost in the presence of increased ozone levels,” said Knaden, describing what was observed during the experiments.

Tobacco hawkmoths are able to learn

The question remained whether ozone in the air would spoil the appetite of hungry and foraging tobacco hawkmoths, or whether it would prevent insects from finding their food source. Would insects be able to figure out that even polluted flower odors can offer rewards? To answer this question, researchers tested whether tobacco hawkmoths could learn to accept an initially unattractive scent as a food cue if they smelled it while simultaneously being offered a sugar solution reward. The researchers assessed several different ways in which the moth could learn to recognize flowers based on the ozone-altered floral scent. This was critical to relating these experiments to real-world learning. In the real world, a floral scent only becomes ozone-altered as it moves downwind of the flower and mixes with ozone. To see if moths could learn ozone-altered floral scents even when they are decoupled from the sugar reward at the flower, the researchers developed an experiment where the moth had to follow the ozone-altered odor to the flower, but were presented with the original scent at the flower containing the sugar reward.

"While we anticipated that Manduca sexta could learn new floral scents and hoped that they would be able to learn the polluted floral scent of their host flower, we were amazed to see that Manduca sexta could learn the polluted floral blend in a number of different ways, including learning a polluted scent that was decoupled from a sugar reward. This type of learning, which we were surprised to find in Manduca sexta, could be very important in insects’ ability to use learning to cope with their rapidly changing environments,” says first author Brynn Cook from the University of Virginia. What is especially noteworthy and pertinent about this kind of responsiveness to a changing environment is that it occurs in real time and not over evolutionary timescales.

Learning ability of Manduca sexta is not an all-clear

Although the study shows that tobacco hawkmoths can learn to rely on ozone-altered and initially unattractive plumes to recognize their flowers, air pollution still poses a serious risk to pollination and pollinators. “Learning may be key to insects recognizing their host plants in polluted environments, but one of the major questions remaining from our study is whether pollinators will be able to find their flowers in the first place. Without initially recognizing smells, will pollinators only have visual cues to help them locate host flowers in order to learn the pollution-altered floral scent? Another important aspect to consider is that other pollinators may not have the same facility to learn new smells that Manduca sexta has. Specialist pollinators, for instance, may not have that flexibility in learning. Our study is just a starting point. Field studies are going to be critical to understanding which flowers and insects are most affected by which pollutants, and likely why,” says Cook.

Air pollution and climate change have far-reaching consequences for our ecosystem; by no means have all of these been studied and understood. For example, we still know little about the impact of atmospheric changes on the chemical communication between plants and insects. Not only are plant odors altered, but also the sex pheromone female insects use to attract males. Atmospheric changes have the potential to cause alterations in pheromones that could lead to mating failure. Insect mortality has risen dramatically in recent years, and researchers worldwide are searching for the causes. Since 2020, the Max Planck Center next Generation Insect Chemical Ecology, a cooperation between the Max Planck Society and two Swedish universities in which the Max Planck Institute for Chemical Ecology and the co-authors of the study, Bill Hansson and Markus Knaden, play a major role, has been dedicated to this field of research.