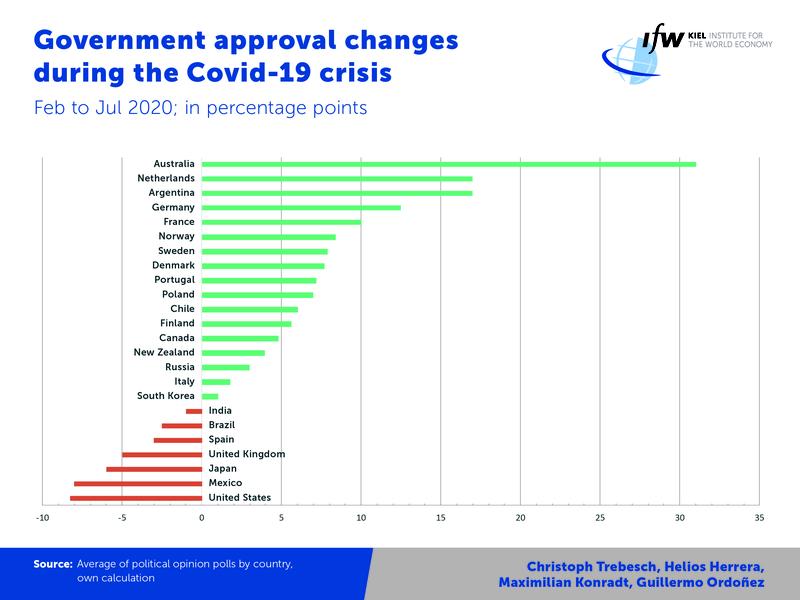 Governments that successfully contain the pandemic and adopt strict countermeasures are the big winners of the Corona Crisis. In comparison, governments that follow loose pandemic policies to limit economic damage perform significantly worse in terms of public support, especially when Covid-19 cases continue to rise. The data show that infection numbers are the main driver for government approval in recent months, with a larger impact than economic indicators. This is the result of a first wide-ranging study on the political impact of the Corona crisis that uses a new dataset from 35 countries for January to July 2020.

The study shows for the first time that Covid-19 case numbers have a strong impact on government approval ratings around the world. At the beginning of the pandemic in February and March 2020 most governments enjoyed a significant boost in public approval. However, in countries where the number of cases continued to rise, approval ratings fell rapidly again, especially if governments did not take strict countermeasures to contain the pandemic. Three months after the outbreak of the virus, approval gains for governments in countries with lower case numbers are on average 7 percentage points higher than in countries with rapidly growing Covid-19 infections. "These are significant differences. Governments with poor pandemic management considerably lower their chances of re-election," says Christoph Trebesch, Head of Research Center at the Kiel Institute for the World Economy and one of the authors of the study.

For the study, researchers compiled a novel database of government approval ratings and election intentions in 35 countries on a weekly basis. They are evaluating this new data resource along with information on Covid-19 infection rates and deaths, as well as indicators of economic activity and political containment measures. The countries under review include 20 developed and 15 emerging economies, where political opinion surveys are conducted very regularly. Overall, these countries account for 65 percent of global economic output. The authors are Helios Herrera from British Warwick University, Maximilian Konradt from Graduate Institute Geneva, Guillermo L. Ordoñez from University of Pennsylvania, and Christoph Trebesch from the Kiel Institute for the World Economy.

On the one hand, the researchers looked at countries such as Italy or Argentina, which reacted quickly to the virus outbreak with restrictive measures. On the other hand there were countries such as Brazil, Sweden, or the United States, which opted for looser pandemic policies despite the large number of Covid-19 cases. For all countries, they investigated the statistical relationships between the various factors. "Rising case numbers in combination with a loose policy response leads to a high loss of reputation for governments," says Guillermo Ordoñez, Professor of Economics at the University of Pennsylvania: "The dynamics are impressive. While most governments benefitted at the beginning of the pandemic, these gains are quickly wiped out in case of rising infection numbers and insufficient containment policies.”

In the researchers' view, the results suggest that economic constraints are less of a deterrent to voters than the health risks from an escalating pandemic. "Approval rates do not react strongly to indicators of economic activity," says Ordoñez. "Governments that did everything possible to contain health risks have benefited despite the economic costs.” The results show the dominant role of health outcomes at the time of a global pandemic crisis among voters, with infection rates being more important than death rates. "Policymakers are evaluated based on case numbers and policies imposed. Those who perform poorly on both fronts also have the worst approval ratings. The patience of the public is very limited in a pandemic like this."

The results of the study allow conclusions for upcoming elections: “Falling case numbers, for example, would significantly increase the chances of re-election for US President Donald Trump. Upcoming elections in Chile, New Zeeland, Portugal, or Bolivia are also likely to be considerably influenced by the pandemic,” says Trebesch.