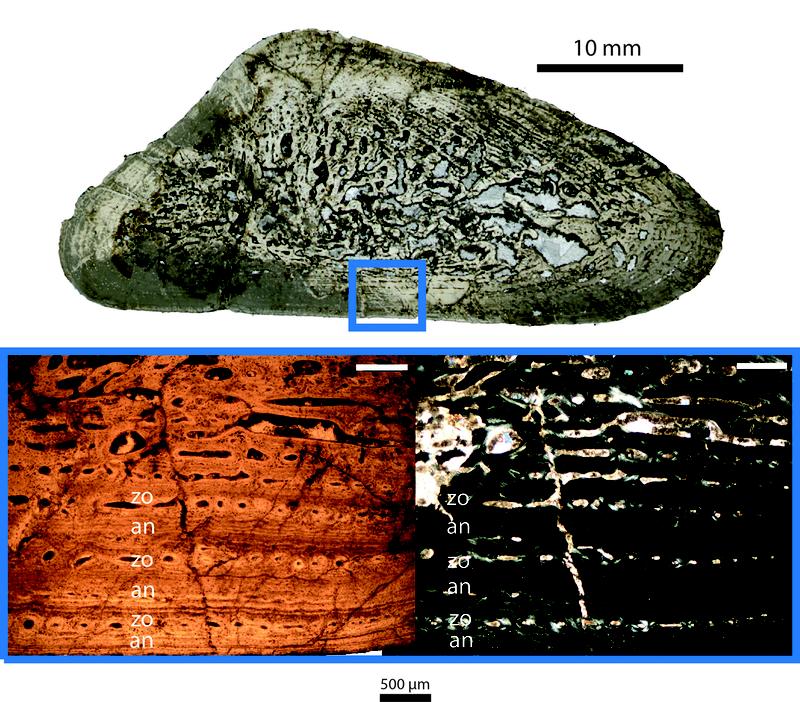 Panthasaurus maleriensis lived about 225 million years ago in what is now India. It is an ancestor of today's amphibians and has been considered the most puzzling representative of the Metoposauridae. Paleontologists from the universities of Bonn and Opole (Poland) examined the fossil's bone tissue and compared it with other representatives of the family also dating from the Triassic. They discovered phases of slower and faster growth in the bone, which apparently depended on the climate. The results have now been published in the journal "PeerJ".

Temnospondyli belong to the ancestors of today's amphibians. This group of animals became extinct about 120 million years ago in the Early Cretaceous. The Temnospondyli also include the Metoposauridae, a fossil group that lived exclusively in the Late Triassic about 225 million years ago. Remains of these ancestors are present on almost every continent. In Europe, they are found mainly in Poland, Portugal and also in southern Germany.

Panthasaurus maleriensis, the most puzzling representative of the Metoposauridae to date, lived in what is now India, near the town of Boyapally. "Until now, there were hardly any investigation opportunities because the fossils were very difficult to access," explains Elzbieta Teschner from the University of Opole (Poland), who is working on her doctorate in paleontology in the research group of Prof. Dr. Martin Sander at the University of Bonn. Researchers from the Universities of Bonn and Opole (Poland), together with colleagues from the Indian Statistical Institute in Kolkata (India), have now examined the tissue of fossil bones of a metoposaur from the Southern Hemisphere for the first time. The amphibian, which resembled a crocodile, could grow up to three meters in length.

Valuable insight into the bone interior

"The investigated taxon is called Panthasaurus maleriensis and was found in the Maleri Formation in Central India," notes Teschner with regard to the name. So far, the fossil has only been examined morphologically on the basis of its external shape. "Histology as the study of tissues, on the other hand, provides us with a valuable insight into the bone interior," says Dr. Dorota Konietzko-Meier from the Institute for Geosciences at the University of Bonn. The histological findings can be used to draw conclusions about age, habitat and even climate during the animal’s lifetime.

The histological examinations revealed that the young animals had very rapid bone growth and that this growth decreased with age. The Indian site where the bones were found provides evidence of both young and adult animals, in contrast to Krasiejów (south-western Poland), where only young animals were found. Geological and geochemical data show that the Late Triassic consisted of alternating dry and rainy periods, as in the present monsoon climate of India. "This sequence is also reflected in the material examined," says Teschner. "There are phases of rapid growth, known as zones, and a slowdown, known as annulus." Normally, one can still observe stagnation lines in the bones, which develop during unfavorable phases of life, for example during very hot or very cold seasons.

In Panthasaurus maleriensis, however, growth never comes to a complete cessation. In comparison: the Polish Metoposaurus krasiejowensis shows the same alternation of zones and annuli in one life cycle and no stagnation lines, whereas the Moroccan representative of the metoposaurs Dutuitosaurus ouazzoui shows stagnation lines - that is, a complete stop in growth - in each life cycle.

The different growth phases in the bones allow for a comparison of climatic conditions. This means that the climate in the Late Triassic would have been milder in Central India than in Morocco, but not as mild as in the area that today belongs to Poland. Sander: "Fossil bones therefore offer a window into the prehistoric past."