Detecting the handedness of a single nanoparticle 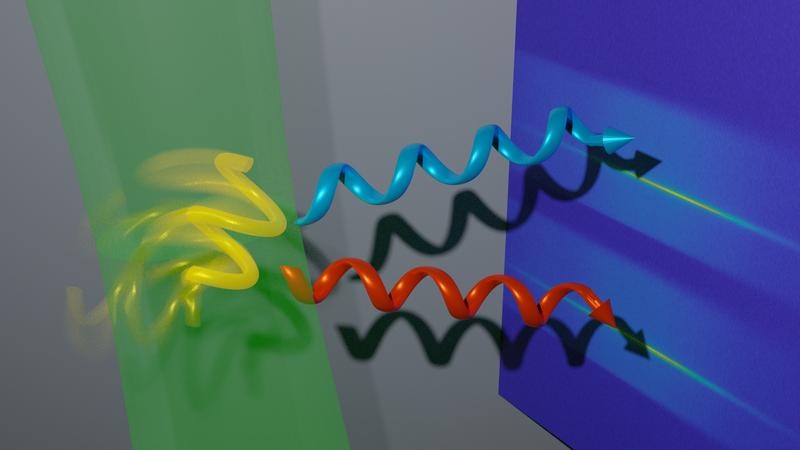 Scientists from the Micro, Nano and Molecular Systems Lab at the Max Planck Institute for Intelligent Systems have developed a new spectroscopic-microscope, which can be used to observe a single nanoparticle in real time. This enabled the first detection of a nanoparticle’s handedness while it is freely moving in solution. The results of their research paves the way for optical measurements with high detection sensitivities down to single molecules and in samples of ultra-low volumes.

Almost all biomolecules, including sugars, DNA, amino-acids and proteins exist – like our hands – in a left-handed and a right-handed form. Remarkably, in life on earth one generally finds most biomolecules in only one of the two possible handed forms. The reason of this “handedness”, also known as chirality, is one of the great unsolved questions in science. However, its consequence is that all living organisms, many objects, and most pharmaceuticals are chiral. It is therefore important to be able to detect handedness. This can be achieved using left- and right-circularly polarized light. For instance, a right-handed object absorbs and scatters right-circularly polarized light differently than a left-handed object. Because the detected differences are very small, classical instruments require many billions of molecules or particles to detect whether they are chiral. This means that larger sample volumes are needed, which can be expensive, and it means that interesting details found on individual objects are averaged out in the ensemble.

Researchers in Stuttgart have now succeeded in observing handedness in a single nanostructure. Metallic nanostructures can act like optical antennas and they offer the possibility to dramatically boost optical signals. For this reason, gold and silver nanostructures are widely employed as probes for optical spectroscopy and are also promising for chiral spectroscopy. However, for the detection of handedness the difference between the left- and right-circular polarization has to be recorded. This means that so far the nanostructure had to stay fixed to a surface while two independent measurements were performed. This introduces considerable artefacts and can even cause objects that are not handed to appear chiral.

The microscope-based spectrometer, which the Stuttgart researcher developed, records both polarization states simultaneously and permitted the first observation of a dynamically moving single nanoparticle. With this approach, it became possible to record chiral spectra of only one nanostructure in solution. In fact, such a spectrum renders a novel observable, which has never been accessed before.

“In the classical ensemble measurement we measure an average over billions of nanoparticles. Due to unavoidable imperfections during the fabrication of so many individual structures, the recorded signal is an average over many different shapes. In contrast, here the observation happens on only one single nanostructure” says Peer Fischer who led the study and heads the Micro Nano and Molecular Systems Lab and who is a Professor at the University of Stuttgart.

A major challenge was to invent a novel detection scheme that allows the simultaneous acquisition of both, the right- and left-circularly polarized spectra in ‘one shot’. “The concept is as simple as it is ingenious because it utilizes only fixed polarization optics to spatially separate the left- and right-circularly polarized light and then detect them at different locations on a specialized camera detector”, says Johannes Sachs, who, together with Jan-Philipp Günther is a first author of the study which appeared in Nature Communications.
The scientists could use the microscope to record the optical spectra of the nanoparticle in real-time, allowing for time-resolved measurements. Based on the new device the team demonstrated how the chiral spectrum of a single nanoparticle depends sensitively on its orientation. The researchers then showed that they could use Brownian motion – the random thermal fluctuations that any small object experiences – to observe the nanoparticle at all angles. This provides the same information as the classical ensemble averaged spectrum, but with one single particle instead of several billion particles.

The scientists believe that their findings and the novel concept is a promising platform for future sensing applications. “Usage of single particles allows working in ultra-low sample volumes and high localization, e.g. within individual cells”, says Johannes Sachs. In addition, a single metallic nanoparticles’ spectrum is highly sensitive to changes of the particles’ local environment, e.g. when a single molecule comes into its proximity or a bound protein changes its conformation. “The ability to observe the chiral spectra of a single particle over time can reveal details about local reaction processes, which would be hidden in a conventional measurement that averages the response of a large number of particles”, says Jan-Philipp Günther.