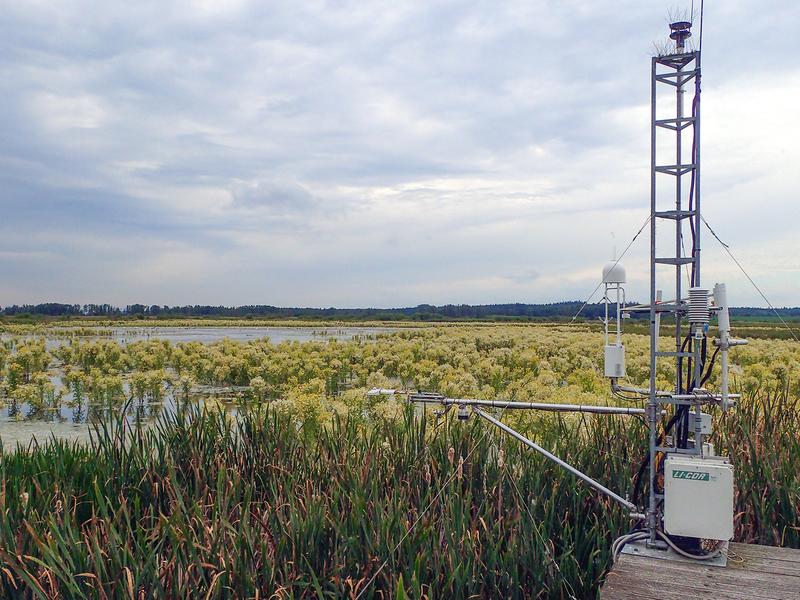 Extremely hot and dry summers are expected to be much more frequent in the future due to climate change.

ICOS, the Integrated Carbon Observation System, has enabled a set of studies showing how nature and crops in Europe respond to extremely dry conditions, such as occurred in the last three summers, 2018-2020. The results published today in Philosophical Transactions B show, for example, that in 2018 the vegetation’s carbon sink function decreased by 18 percent, and crops produced the lowest yields in decades. The results are significant since such extreme droughts will likely happen much more frequently in the future.

ICOS, the Integrated Carbon Observation System, has enabled a set of studies showing how nature and crops in Europe respond to extremely dry conditions, such as occurred in the last three summers, 2018-2020. The results published today in Philosophical Transactions B show, for example, that in 2018 the vegetation’s carbon sink function decreased by 18 percent, and crops produced the lowest yields in decades. The results are significant since such extreme droughts will likely happen much more frequently in the future.

Extremely hot and dry summers are expected to be much more frequent in the future due to climate change. This is visible even now, the past summer being the third extremely hot summer in row. The areas of crops affected by droughts will also probably increase considerably, when carbon dioxide (CO2) levels continue to rise.

The 2018 summer had the largest ever area in Europe under extreme drought. Temperature records were broken in many regions of Central Europe and the UK, fires broke out in the Nordic countries, and several countries were affected by crop failures.

The 17 study results published today in a special issue of Philosophical Transactions B show how vegetation in Europe responds to drought, i.e. how the exchange of carbon between the vegetation and atmosphere is affected. The studies cover areas from Spain to Sweden and Finland, and from the Czech Republic through Germany, France and Belgium to the Netherlands and the UK. The drought studies provide crucial knowledge when trying to minimise the negative effects of the climate change.

According to the results presented, the plants first profited from warm and sunny conditions in spring 2018, but then had not enough water available to their roots when the summer heat wave hit. Grasslands “browned-down” during the drought, causing to shortages of hay for cattle, and many crops produced the lowest yields in decades, causing financial losses for many industrial sectors. “Several studies show that the dryness of the soil affected the plants even more than e.g. the high temperature and the humidity of the air,” explains Ana Bastos, a scientist at Max Planck Institute, Germany, and one of the lead authors of the theme issue.

Many of the studies found that on the European scale, the forests protected themselves by reducing their evaporation and growth, leading to decreased uptake of carbon dioxide. Carbon sinks decreased in general by 18% according to a study covering 56 sites. The dry conditions even turned some ecosystems from sinks into sources.

As notable exception, however, rewetted peatlands seemed to survive better. “The drought lead to an impressive gain in new vegetation at our rewetted peatland site, which became a CO2 sink for the first time since rewetting despite increased respiratory CO2 losses”, explains Torsten Sachs, scientist at the GFZ German Research Centre for Geoscience, who contributed to two of the studies in collaboration with colleagues at the University of Rostock. “Additionally, in the year following the drought, methane emissions were significantly reduced, indicating a lasting shift to more non-methanogenic decomposition pathways.” This is good news since rewetting peatlands is one of the means widely used to mitigate the consequences of the climate change. “Another benefit of rewetted peatlands is the water retention in the landscape and regional cooling effects from evapotranspiration”, adds Pia Gottschalk, also at GFZ. “While evapotranspiration significantly increased at the peatland sites, the increase in mean annual temperature was about 20% less then at the drought-affected forest, crop, and grassland sites.”

Further, these studies show that the response of the vegetation to an extremely dry summer is strongly dependent on the conditions of the previous spring and even winter. In some parts of the Europe, the winter 2018 was wet, leaving a lot of soil moisture in the ground, while spring was sunny and came early - this caused the vegetation to grow more than average in spring, taking up more carbon from the atmosphere than usual. In some places, this early spring growth was enough to offset the reduction of carbon uptake later in summer. “If the scientific community could predict such droughts and their impacts several months prior to the drought, it would help in adapting to changing climate conditions,” ponders Professor Wouter Peters from the University of Wageningen, the Netherlands. Peters is one of the lead authors or the theme issue.

The 17 studies represent the work of over 200 scientists within the ICOS research infrastructure, representing all European top universities and research institutes. The scientists participating in the research effort cooperated extremely well, gathering a vast amount of data, points out Alex Vermeulen, co-organiser of the study and Director of the ICOS Carbon Portal: “We had open data exchange during process, resulting in the unique data sets openly available through ICOS Carbon Portal” (Link). The first data sets were available already within 6 months since starting the initiative.

This all was possible thanks to the existing infrastructure and data of ICOS, the Integrated Carbon Observation System, which continuously measures important climate variables over 140 stations across Europe. The long-term high-quality data provided allows for reaching scientific results faster than in traditionally conducted studies.

“Being able to produce unique data sets and results in such a short time shows that research infrastructures such as ICOS are powerful tools enabling high-quality research. To adapt to the changing climate, we cannot rely on tens-of-years-old-knowledge: We must have timely information about the state of the Earth,” states Philippe Ciais, Research Director at the Laboratoire des Sciences du Climat et de l’Environnement (LSCE), France, and one of the organisers and editors of the theme issue.

“These drought studies demonstrate that the ICOS community is able to collaborate across disciplines, integrate various data streams and bring forth new knowledge to solve the challenges climate change sets all of us,” says Werner Kutsch, Director General of ICOS.

ICOS organises its Science Conference online on 14-17 September 2020. Many of the results are being presented by the authors in the Session 2 of the conference, on Tuesday at 14-15.30. The ICOS conference program is available on the ICOS website, and registration is free of charge. Oral sessions are recorded for the participants.