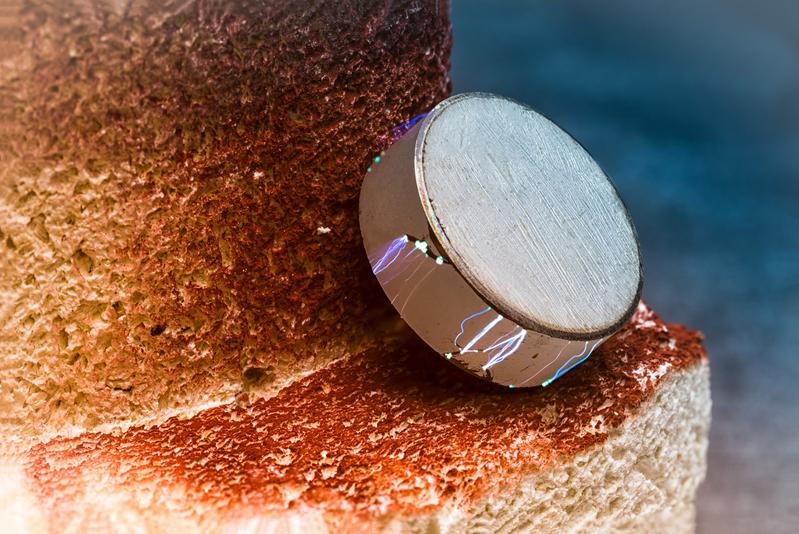 Pyroelectricity is a phenomenon in physics in which heat can be converted into electricity via certain crystals or into a voltage that can be used for chemical reactions. While the first application is already used in devices such as motion detectors today, the second application, although well-known, has not yet been sufficiently described on a theoretical basis. A team of physicists at TU Bergakademie Freiberg has now found a way to describe and predict the processes on pyroelectric surfaces. The researchers have now published their results in the journal "Physical Chemistry Chemical Physics".

Dr. Mateo de Vivanco picks up a hair dryer and directs warm air onto an inconspicuous small crystal. A moment later, after about 5 seconds, small flashes are visible to the naked eye on the surface of the crystal (see photo). What sounds like magic can be described with the phenomenon of pyroelectricity, which is sufficiently well known in physics: "Crystals of the pyroelectric material class generate an electrical voltage when their temperature changes," explains the research assistant at the Institute for Experimental Physics (IEP) of the TU Bergakademie Freiberg. The reason for this phenomenon lies in the smallest positively and negatively charged particles of the crystal, which drift together or apart once the temperature changes. These movements sum up to an electric discharge current at the surface of the crystal.

Voltage can be used for chemical reactions

In a possible application scenario the resulting voltage could be used for chemical reactions. "Of particular interest is the splitting of water into oxygen and hydrogen, which is a gas in great demand as an energy carrier and in the chemical industry," says Dr. Mateo de Vivanco. However, although this reaction could be experimentally demonstrated several years ago, the physico-chemical processes running behind have so far been insufficiently described in international research. This is where the team of physicists came in and, as a first step, studied existing models that explain similar reactions.
"As a chemist in a physics research group, I wanted to calculate the hydrogen yield from pyroelectric water splitting. Since this was not possible with existing models, my team and I considered which factors limit the pyroelectric yield," explains the corresponding author of the study. "Compared to the direct use of (pyro-)electricity, a chemical reaction such as hydrogen production involves overvoltages of various kinds, which can impede water splitting," Dr. Mateo de Vivanco continues. After several years of research, the team thus succeeded in developing the chemical-physical model that has now been presented, which can be used to explain and predict the processes on pyroelectric surfaces in chemically labile media such as water.

Thanks to the new model, which the researchers present in the August issue of the journal "Physical Chemistry Chemical Physics", new possibilities for understanding complex electrochemical processes on solid surfaces are opening up. For the first time, the amount of hydrogen produced can be explained and predicted. If the pyroelectric process is further developed in the future - not only with the help of the new model - new potential applications for research and industry will arise.

"The team's current results represent a reliable lead-up to the current discussions, in particular when it comes to the development of essential hydrogen-based technologies", says Prof. Dirk C. Meyer, Director of the IEP, in his capacity as Scientific Spokesman of the Center for Efficient High-Temperature Materials Conversion (ZeHS) at TU Bergakademie Freiberg. "The study of crystal-physical coupling phenomena, especially pyroelectricity, has been a focal point of the work at the IEP for several years now", says Prof. Dirk Meyer. The research team was honoured by the journal with the design of the title page.