A phonon laser – coherent vibrations from a self-breathing resonator 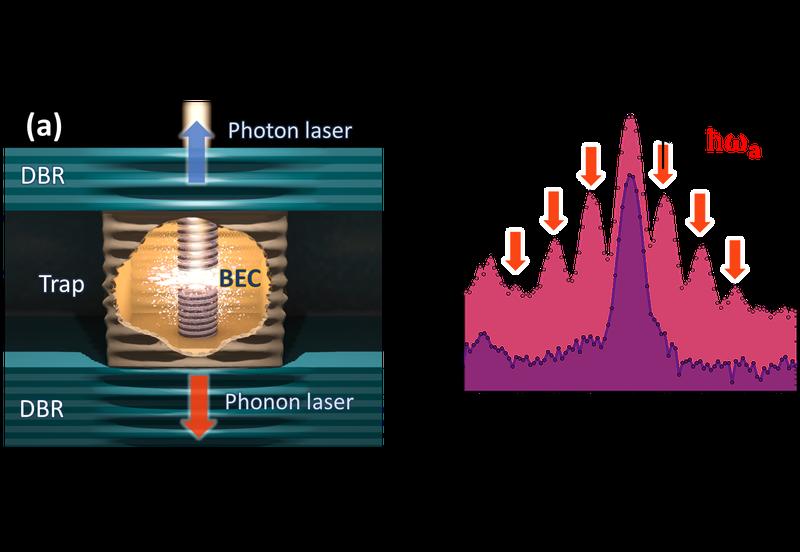 Lasing – the emission of a collimated light beam of light with a well-defined wavelength (color) and phase - results from a self-organization process, in which a collection of emission centers synchronizes itself to produce identical light particles (photons). A similar self-organized synchronization phenomenon can also lead to the generation of coherent vibrations – a phonon laser, where phonon denotes, in analogy to photons, the quantum particles of sound.

Photon lasing was first demonstrated approximately 60 years ago and, coincidentally, 60 years after its prediction by Albert Einstein. This stimulated emission of amplified light found an unprecedented number of scientific and technological applications in multiple areas.

Although the concept of a “laser of sound” was predicted almost at the same time, only few implementations have so far been reported and none has attained technological maturity. Now, a collaboration between researchers from Instituto Balseiro and Centro Atómico in Bariloche (Argentina) and PauI-Drude-Institut in Berlin (Germany) has introduced a novel approach for the efficient generation of coherent vibrations in the tens of GHz range using semiconductor structures [Nat. Commun. DOI 10.1038/s41467-020-18358-z]. Interestingly, this approach to the generation of coherent phonons is based on another of Einstein’s predictions: that of the 5th state of matter, a Bose-Einstein condensate (BEC) of coupled light-matter particles (polaritons).

The polariton BEC is created in a microstructured trap of a semiconductor microcavity consisting of electronic centers sandwiched in-between distributed Bragg reflectors (DBRs) designed to reflect light of the same energy ℏω_C emitted by the centers (cf. Fig. 1a). When optically excited by a light beam with a different energy ℏω_L, for which the DBR is transparent, the electronic states of the centers emit light particles (photons) at the energy ℏω_C, which are back-reflected at the DBRs. The photons are then again reabsorbed by the centers. The rapid and repeating sequence of emission and reabsorption events makes it impossible to distinguish whether the energy is stored in an electronic or photonic state. One rather says that the mixing between the states creates a new, light-matter particle, called polariton. Furthermore, under a high particle density (and helped by the spatial localization induced by the trap), the polaritons enter a self-organized state similar to photons in a laser, where all particles synchronize to emit light with the same energy and phase – a polariton BEC laser. The characteristic signature of the polariton BEC is a very narrow spectral line illustrated by the blue curve in Fig. 1b, which can be detected by measuring the evanescent radiation escaping from the microcavity.

A further interesting property of the used microcavity mirrors (DBRs) is the ability to reflect not only optical (light) but also mechanical vibrations (sound) within a specific range of wavelengths. As a consequence, a typical AlGaAs microcavity for photons in the near-infrared also confines quanta of vibrations – phonons - with the energy ℏω_a corresponding to the oscillation frequency ω_a/2pi of approximately 20 GHz. As the photon reflection by the DBRs provides the required feedback for the formation of a polariton BEC, phonon reflection leads to a buildup of the phonon population as well as an enhancement of the phonon interaction with the polariton BEC.

How does the interaction between polaritons and phonons occur? As air in a tire, a high density of condensed polaritons exerts a pressure on the microcavity mirrors, which can trigger and sustain mechanical oscillations at the frequency of the confined phonons. These breathing oscillations modify the microcavity dimensions, thus acting back on the polariton BEC. It is this coupled optomechanical interaction that gives rise to the coherent emission of sound above a critical polariton density. A fingerprint of this coherent emission of phonons is the self-pulsing of the BEC emission under continuous excitation by a laser with the energy ℏω_L. This self-pulsing is identified by the emergence of strong sidebands around the polariton BEC emission displaced by the multiples of the phonon energy ℏω_a (cf. the red curve in Fig. 1b).

Analysis of the amplitude of the sidebands in Fig. 1b shows that hundreds of thousands of monochromatic phonons populate the resulting vibrational state and are emitted towards the substrate as a 20 GHz coherent phonon laser beam. An essential feature of the design is the stimulation of the phonons by an internal highly intense and monochromatic light emitter – the polariton BEC - which can be excited not only optically but also electrically, as in a Vertical Cavity Surface Emitting Laser (VCSEL). Furthermore, higher phonon frequencies can be achieved by appropriate modifications of the microcavity design. Potential applications of the phonon laser include the coherent control of light beams, quantum emitters, and gates in communication and quantum information devices, as well as light-to-microwave bidirectional conversion in a very wide 20-300 GHz frequency range relevant for future network technologies.

Detailed caption:
Figure 1. (a) Polariton BEC and phonon lasing of a microstructured trap in a semiconductor microcavity. (b) BEC emission under low (the lower curve) and high (the upper curve) particle densities, displaying phonon sidebands separated by the phonon energy ℏω_a .