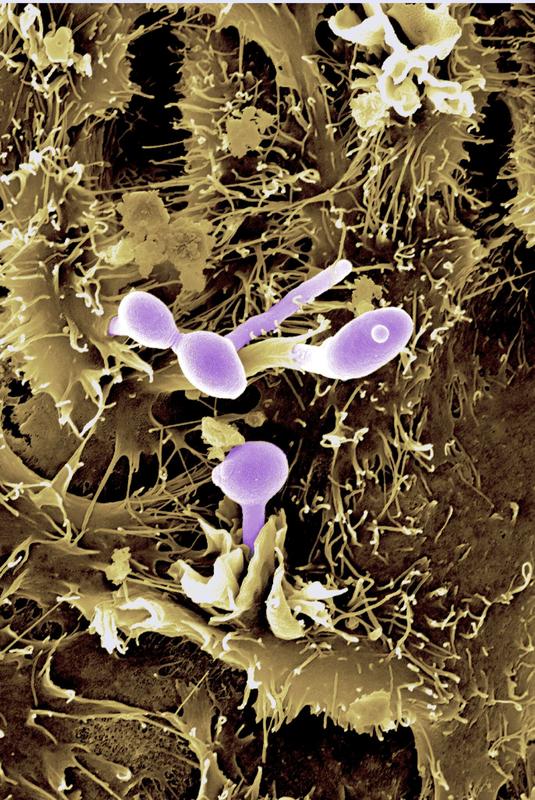 Interplay between fungi and bacteria impaired

Jena. Treatment with antibiotics has a lasting effect on the microbiome in the digestive system. While the bacterial flora is largely regenerated within 30 to 90 days after drug treatment, its interaction with resident fungi changes. In a combination of bioinformatic analyses and laboratory experiments, an international team of researchers has shown now that the peaceful coexistence of bacteria and fungi changes into a competitive situation when they are treated with antibiotics. This could subsequently favour fungal infections.

The discovery of antibiotics was a milestone in the history of medicine; severe, often fatal infections seemed to have been defeated forever. Today, negative effects of antibiotic use are also known: For example, it has a detrimental effect on the composition of the intestinal flora. "In our digestive tract there is a delicate balance of numerous microbial species, which is disturbed by the administration of antibiotics. Not only the bacteria are affected, but also the fungi found in our intestines. The interaction between the bacteria and fungi under the influence of antibiotics has not yet been studied in humans," says Gianni Panagiotou, head of the Research Group Systems Biology and Bioinformatics at the Leibniz Institute for Natural Product Research and Infection Biology - Hans Knöll Institute (Leibniz-HKI).

For their study, the team led by Panagiotou analysed stool samples from 16 healthy volunteers. Fourteen of them received various broad-spectrum antibiotics over a period of six days; two other study participants formed the control group. The volunteers gave their stool samples before, during and after taking the antibiotics. "30 days after the end of treatment, the bacterial microbiome had largely regenerated. However, 90 days after treatment, we were still able to detect changes in more than a third of the fungal species in the intestine. We observed that the fungal communities changed together with those of the bacteria," says Panagiotou. The fungi started to compete with each other and not all of them were able to re-colonize. This led to a decrease in the diversity of fungal species. These changes manifested themselves in the further course of the study. When processing the data obtained, the researchers found another indication of the great importance of interactions between fungi and bacteria: For example, several metabolic products of the bacteria suppress the pathogenic abilities of fungi, such as the yeast fungus Candida albicans.

"Our study with its relatively small number of participants has already led to important new findings. It also points us in the direction of further investigations. For example, we will increase the group of test persons and include antibiotics with a narrower spectrum of activity," says Panagiotou, who conducted his part of the study within the DFG's FungiNet Collaborative Research Centre/Transregio. With his research, he is contributing to a better understanding of the complex processes in microbial communities. The Jena Cluster of Excellence Balance of the Microverse is dedicated to such microbiomes and aims to investigate their dynamics and identify the underlying principles of their regulation in different habitats. These findings contribute to the development of solutions for different social areas such as medicine or agriculture.

Scientists from Leibniz-HKI in Jena, the Technical University of Denmark and the University of Hong Kong participated in the study. Using bioinformatic methods, they analysed enormous amounts of data from the gene sequences of all microorganisms contained in the samples. In addition, they investigated the release of various bacterial metabolic products in the biochemical laboratory, which influence fungal growth. The research team published the results of the study in the scientific journal Microbiome.