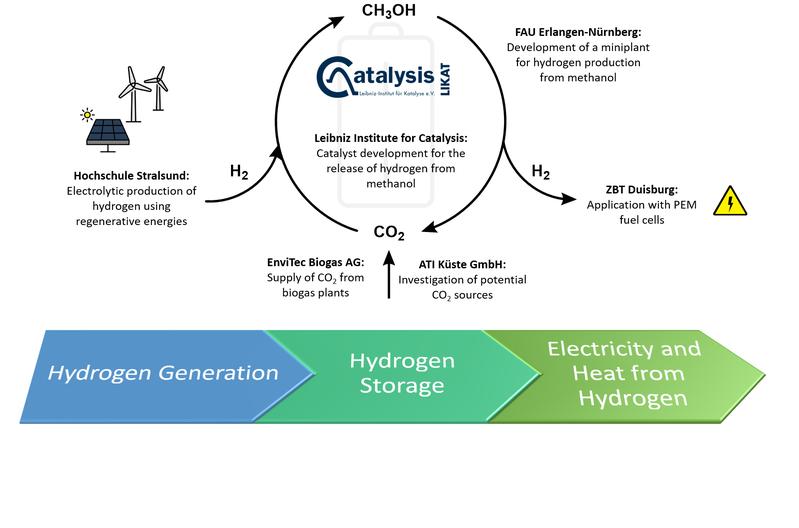 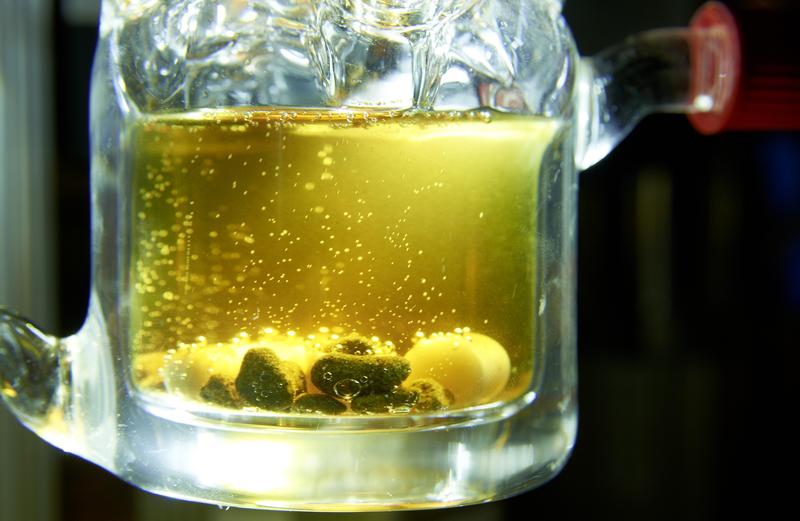 Chemists at the Leibniz Institute for Catalysis (LIKAT) in Rostock are able to produce hydrogen from methanol under mild conditions of less than one hundred degrees Celsius and ambient pressure, with the yield and purity required for fuel cells. To achieve this, they optimized a proprietary process that they had published in NATURE at the time. The catalytic reaction is at the heart of the Metha-Cycle project, a concept for the storage and use of regenerative energies funded by the Federal Ministry of Economics. For the first time, wind power, electrolysis and CO2-based methanol synthesis as well as the reconversion of methanol into H2 have been directly linked together.

"Such a direct coupling has never existed before", says project coordinator Dr. Henrik Junge, group leader at the LIKAT. The concept can significantly accelerate the energy turnaround in rural areas: It allows companies and municipalities to supply themselves with "green" electricity independently of wind power. It is well known that electrical energy from wind power is not always generated when it is needed most.

This is how Metha-Cycle works: wind turbines (optionally photovoltaic systems) produce electrical energy. This electricity is used to electrolytically produce hydrogen from water, which in turn is converted into methanol using CO2. Methanol, the simplest representative in the group of alcohols, thus functions as a storage medium for hydrogen, as chemists have long suggested. Dr. Junge: "Unlike hydrogen, methanol is easy to handle and can be transported over long distances. If required, methanol is converted back into H2 and immediately afterwards used in a fuel cell to generate electricity.
In the research association Metha-Cycle, led by LIKAT, the partners also used the waste heat of the fuel cell to supply the hydrogen recovery system with part of the necessary reaction heat. The test plant of the Friedrich-Alexander-University (FAU) Erlangen-Nürnberg demonstrated the functional efficiency of the concept in spring with a running time of almost 500 hours. The fuel cell, developed by the Center for Fuel Cell Technology (ZBT) Duisburg, continuously produced electricity with a power output of up to 39 watts.

Normally, high pressure and temperatures of several hundred degrees Celsius are needed to recover hydrogen from methanol. This has made a general application in the context of energy concepts less attractive so far. In 2013, LIKAT chemists described in the magazine NATURE how they produced H2 and CO2 from an aqueous methanol solution with the help of a ruthenium catalyst under mild conditions below one hundred degrees Celsius. This reaction now had to be optimized. Because in order to be able to fire a fuel cell permanently, the chemical process must provide sufficient H2 per unit of time, and this must also be of a certain purity.
For this purpose, the research group around Dr. Junge and LIKAT director Prof. Dr. Matthias Beller set out to analyze the molecular processes of the reaction. Henrik Junge was already in contact with potential partners for a joint project with the aim of "decoupling the emergence of regenerative energy from its consumption", as he says. In the meantime, the whole world began to think about the role of hydrogen and methanol for an energy turnaround to save the climate. In autumn 2016 the BMWi took over the funding of the Metha-Cycle project for three and a half years with a total of 1.8 million euros.

For their part, the LIKAT researchers analyzed how the ruthenium catalyst works in the methanol solution to get to H2 and CO2, i.e. to release the hydrogen again. During these "mechanistic investigations", as they call the works, they discovered three cascade-like connected steps. At the end of each of the first two steps, one part of the hydrogen is already produced and an intermediate product, a so-called intermediate, is also produced. The first step is formaldehyde, which is then processed in the presence of the catalyst in the second step.
In the second step of the cascade, formic acid is produced, and LIKAT is very familiar with this. Because 20 years ago, the Rostock-based company succeeded in releasing H2 from formic acid at room temperature.
But the third step, from formic acid to hydrogen, proved to be the slowest, as Henrik Junge says. "It slowed down the entire system." So the fuel cell would not have been able to get a supply of H2 fast enough. In order to jolt the cascade into action, the researchers ultimately decided on a bi-catalytic system: they gave their ruthenium catalyst a second catalyst to help them. Surprisingly, they only needed to modify their first catalyst slightly.

The chemists were also surprised by the synergetic effect of their system. Dr. Junge: "When combined, the two catalysts enabled a better yield than the sum of their individual performances would have produced".
At FAU Erlangen, the process engineers involved in the project made the bi-catalyst fit for a continuous process in the test plant, with which the Metha-Cycle research consortium ultimately demonstrated the functionality of the concept. For this purpose, the colleagues impregnated a solid, highly porous carrier with the catalytically active complex from Rostock. Methanol and water vapor flow continuously over this carrier. The hydrogen produced is also continuously discharged in order to be immediately converted into electricity in the connected fuel cell.